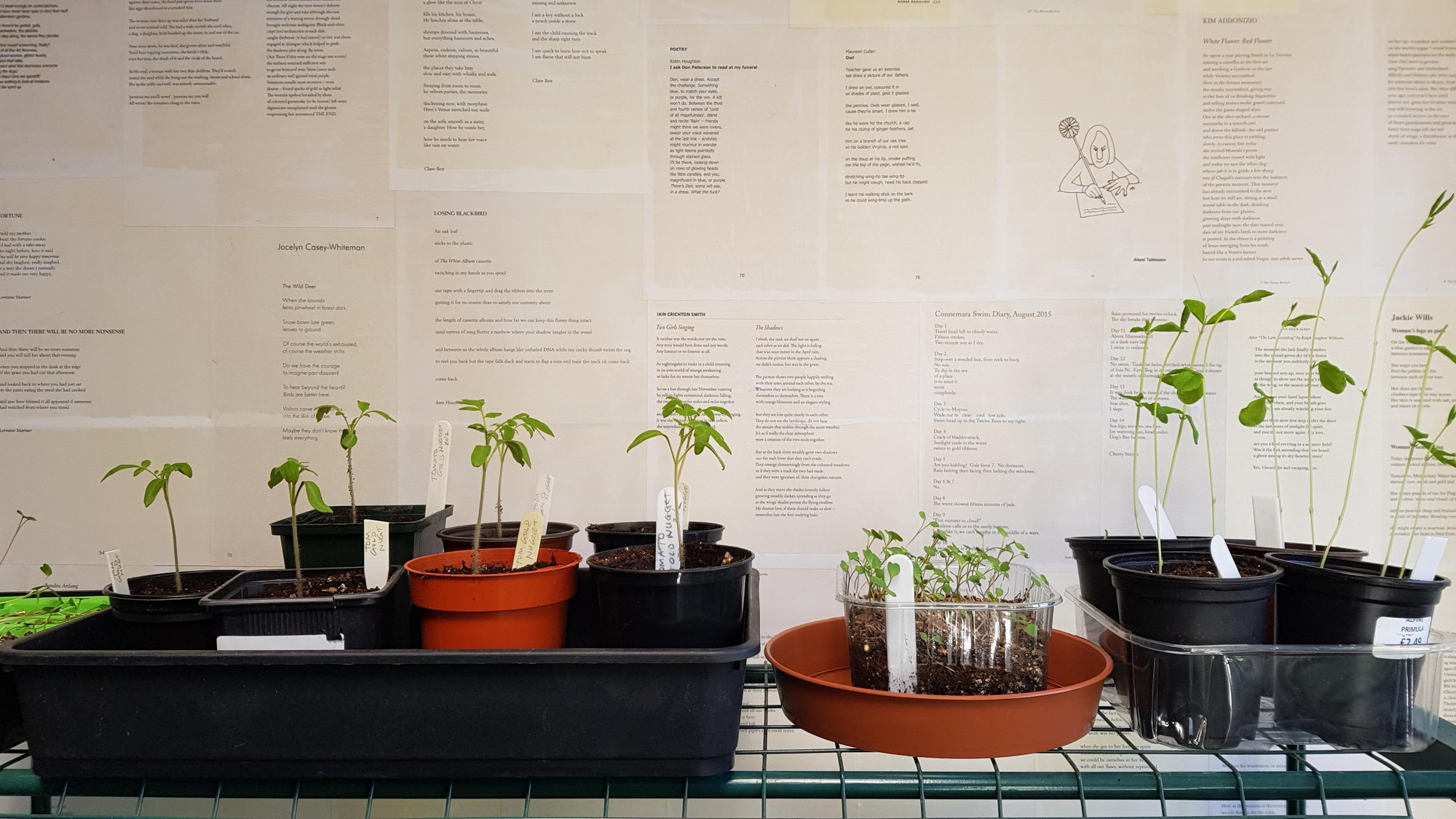 Last autumn we finally got our new potting shed. Actually it’s a potting shed and tool shed in one building, on the site of the old summerhouse and toolshed. Our neighbours were very happy to have both the old structures in the communal garden, which entailed taking both sheds apart, carrying it all 300 yards including up steps, and rebuilding them a new position. This was done in our absence, and it was amazing to come home and see our summerhouse staring at us from the top of the garden! What this left was a big space for the new building. There had been a few feet of space behind the summerhouse, and another few feet between the summerhouse and the tool shed. The new structure was planned to utilise all the space, and to use the back wall. 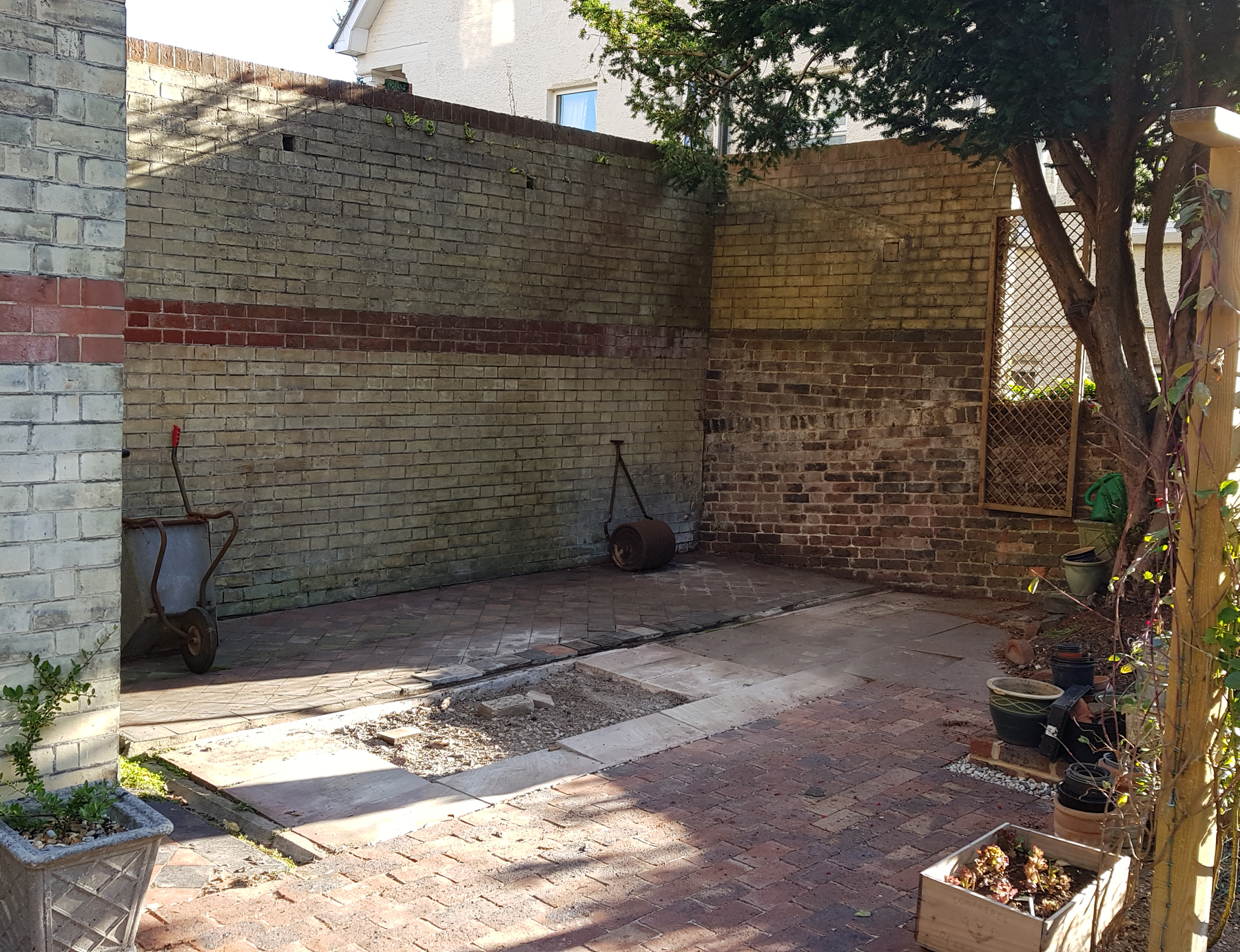 Nigel Philips, who had designed the garden, helped us draw up a plan, and after a bit of fiddling with it we asked Carl of CRH Carpentry to take on the build. A mostly brick base was already there. From the holes in the walls it looked as is if there used to be a structure here years ago, possibly a Victorian garden lean-to or conservatory. 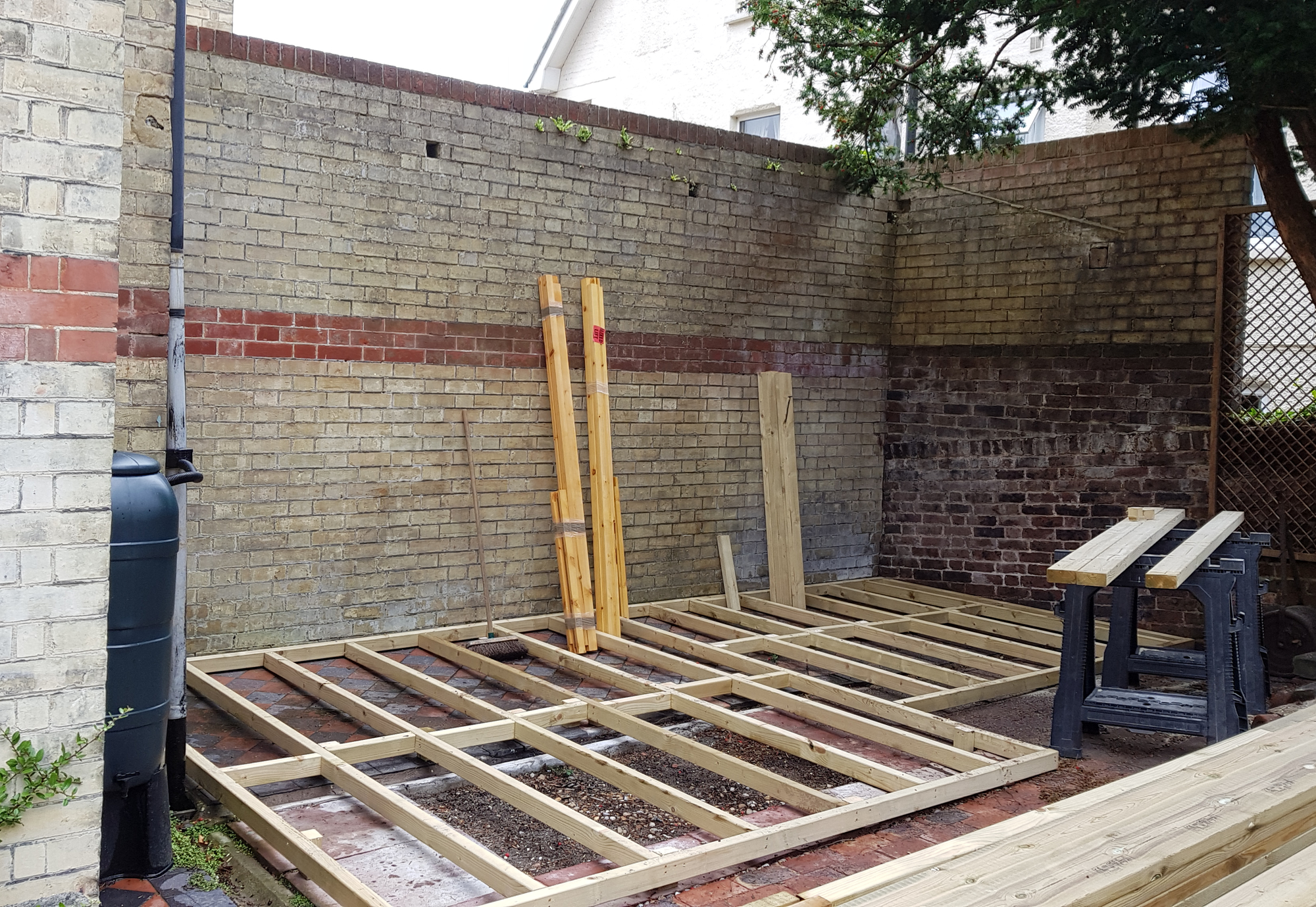 The brief was to use the two brick walls and to bring the structure up against the house wall on the left, although a downpipe made that slightly tricky and we didn’t want to start moving pipes and drains. A workaround meant that the drain is still accessible, but the roof covers the small gap and ‘attaches’ the structure to the house. 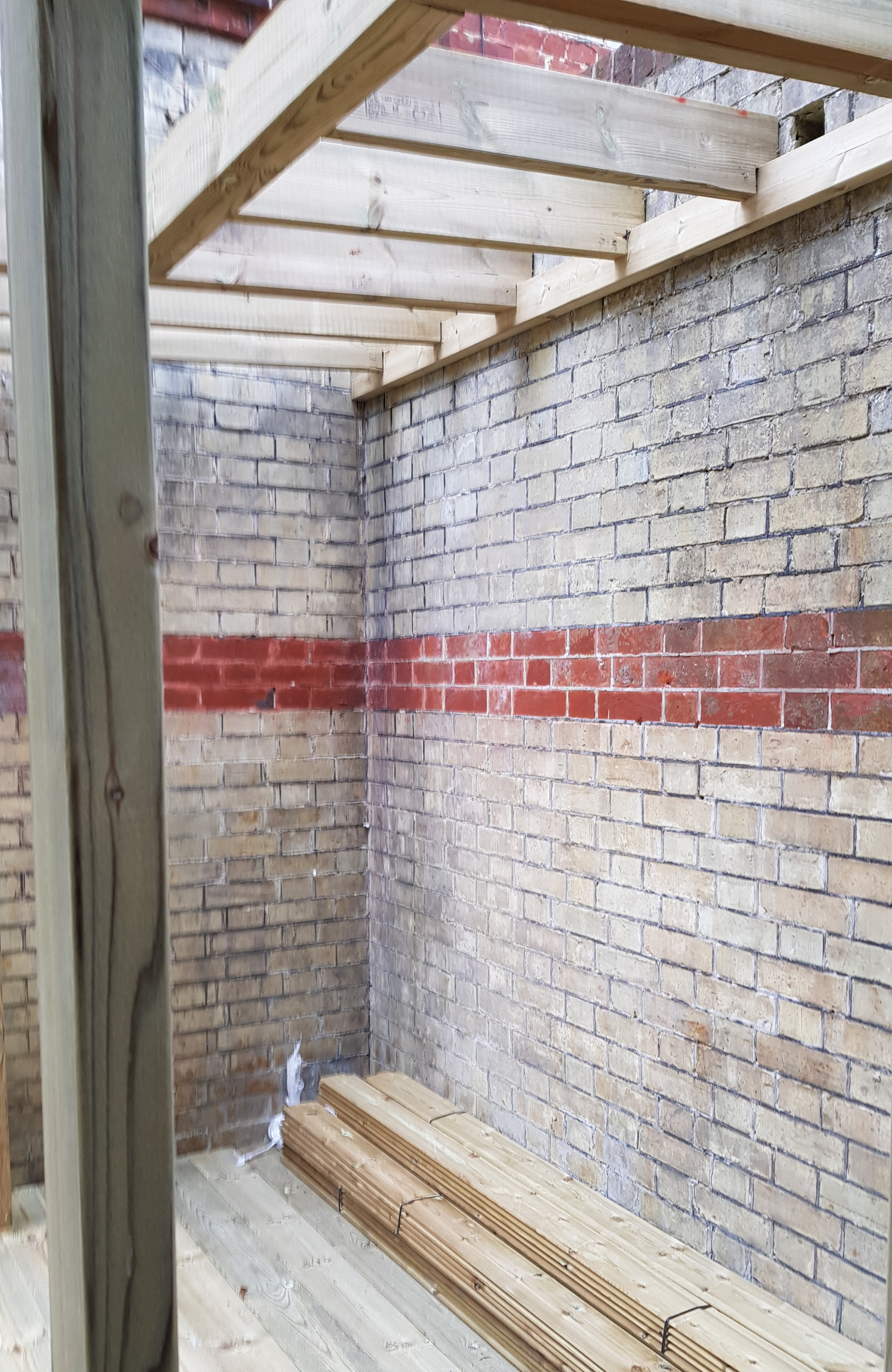 It didn’t take long for Carl and his team to get the frame up. 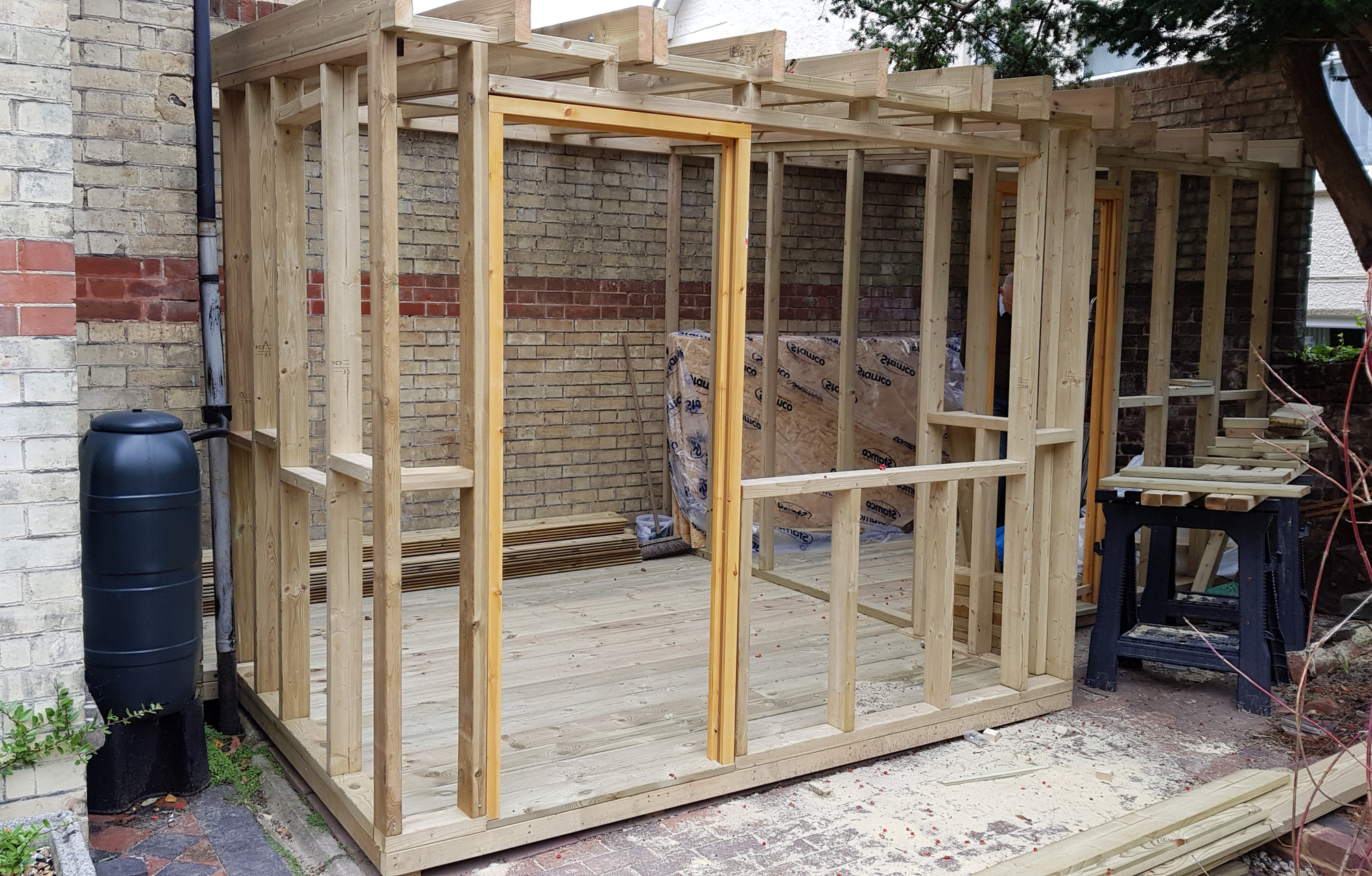 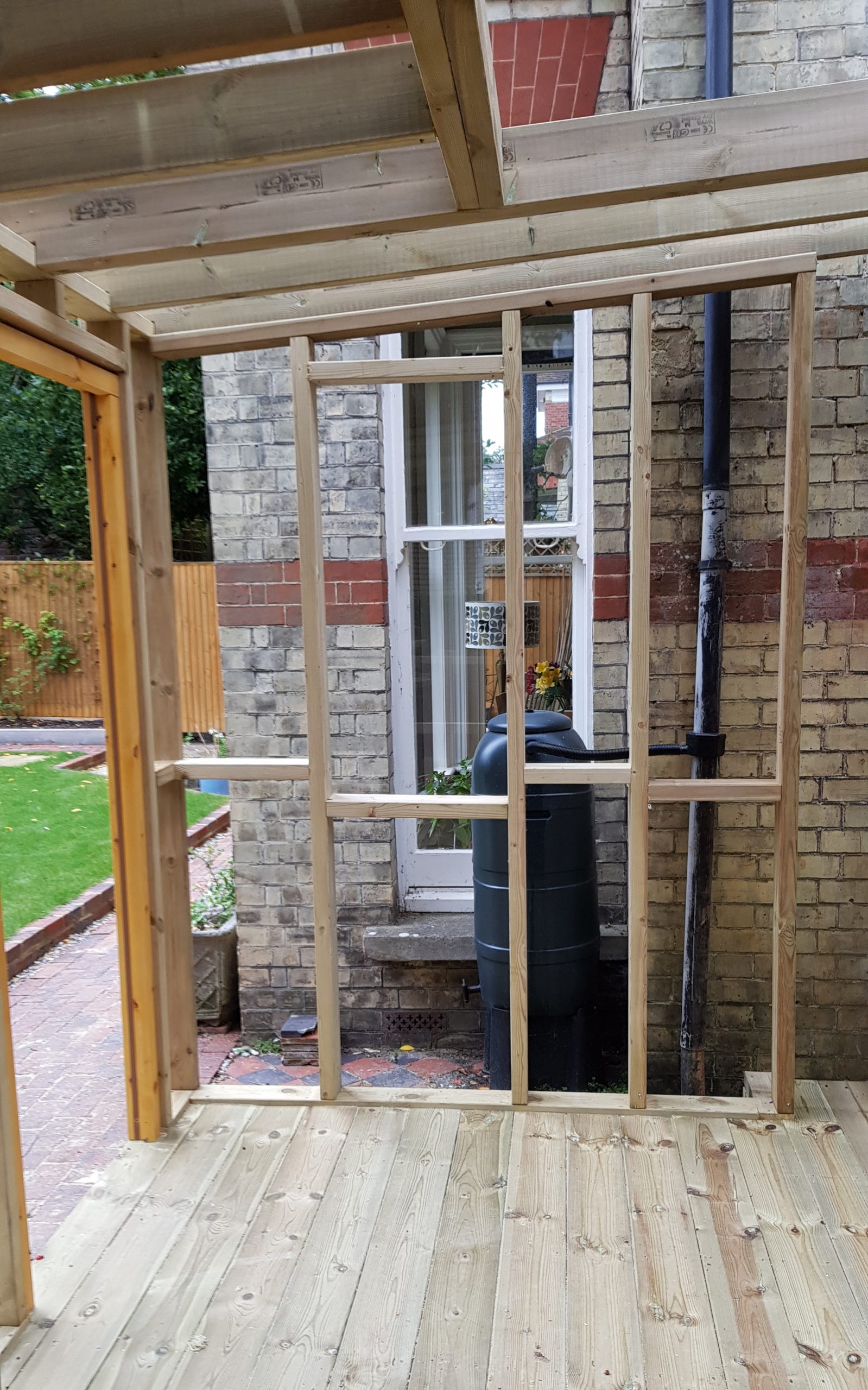 There’s a hole in the roof where a skylight was to go.

In an ideal world we’d have a potting shed AND a greenhouse, but this needs to be both. So a roof light was an important feature. 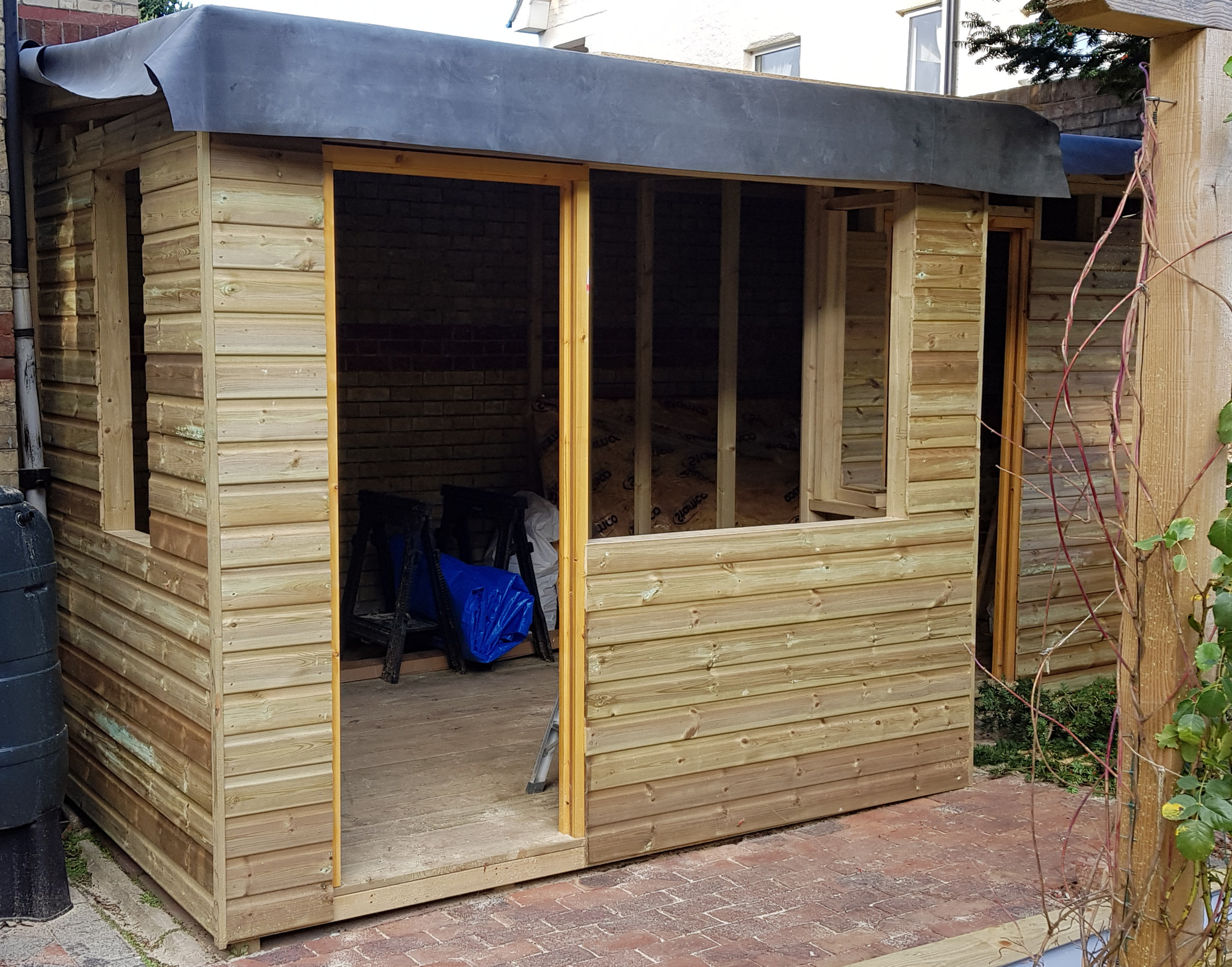 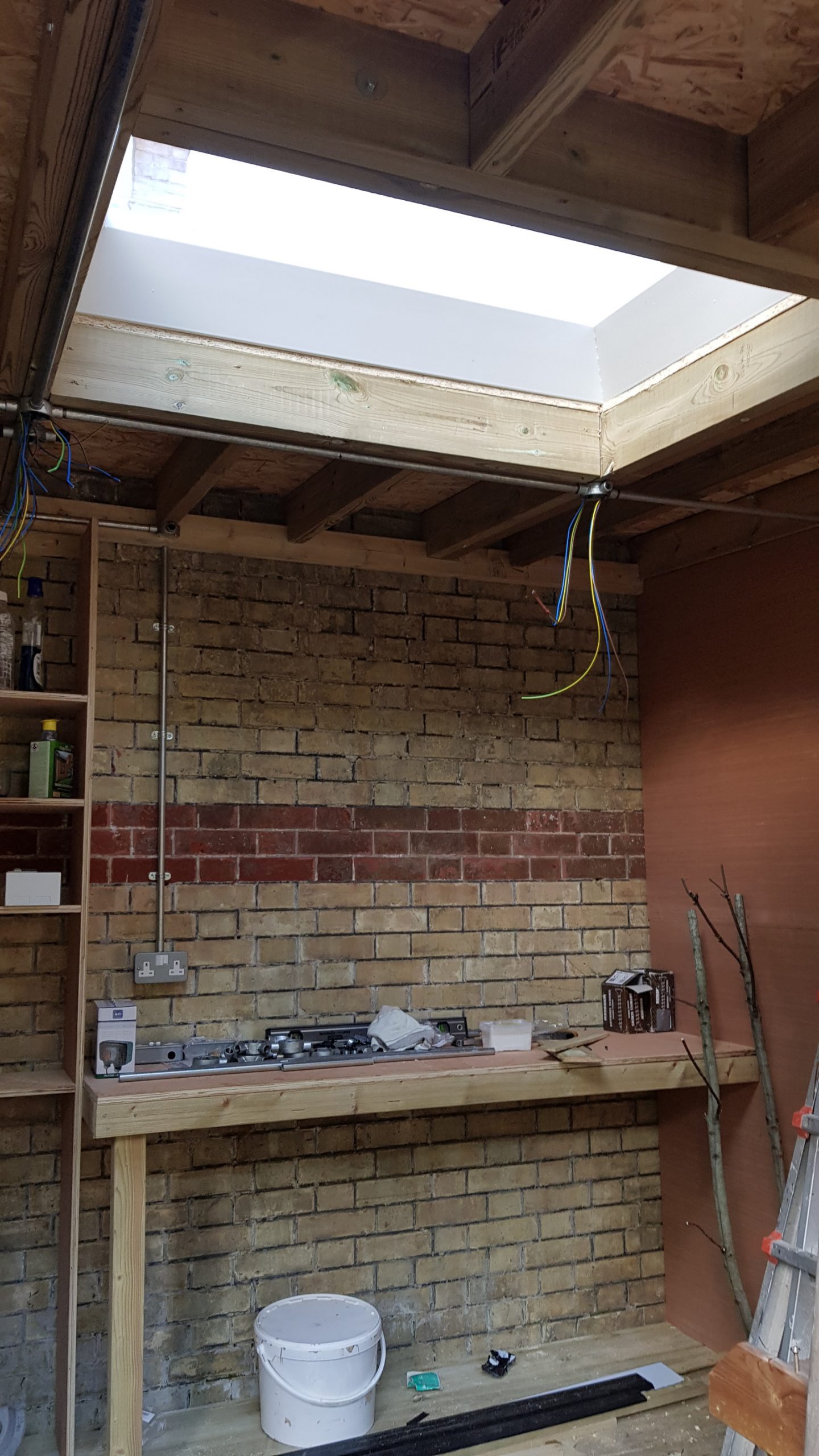 Here’s the rooflight in place, plus the bench and shelving. The wall on the right separates the potting shed from the tool shed. We wanted galvanised steel trunking for the electricity cables, although this caused the electrician some grief! It looks fantastic though. My plan was to have the bench covered in a zinc or steel top. After talking to Matt at PMF in Newhaven, he ordered us a sheet of zinc. 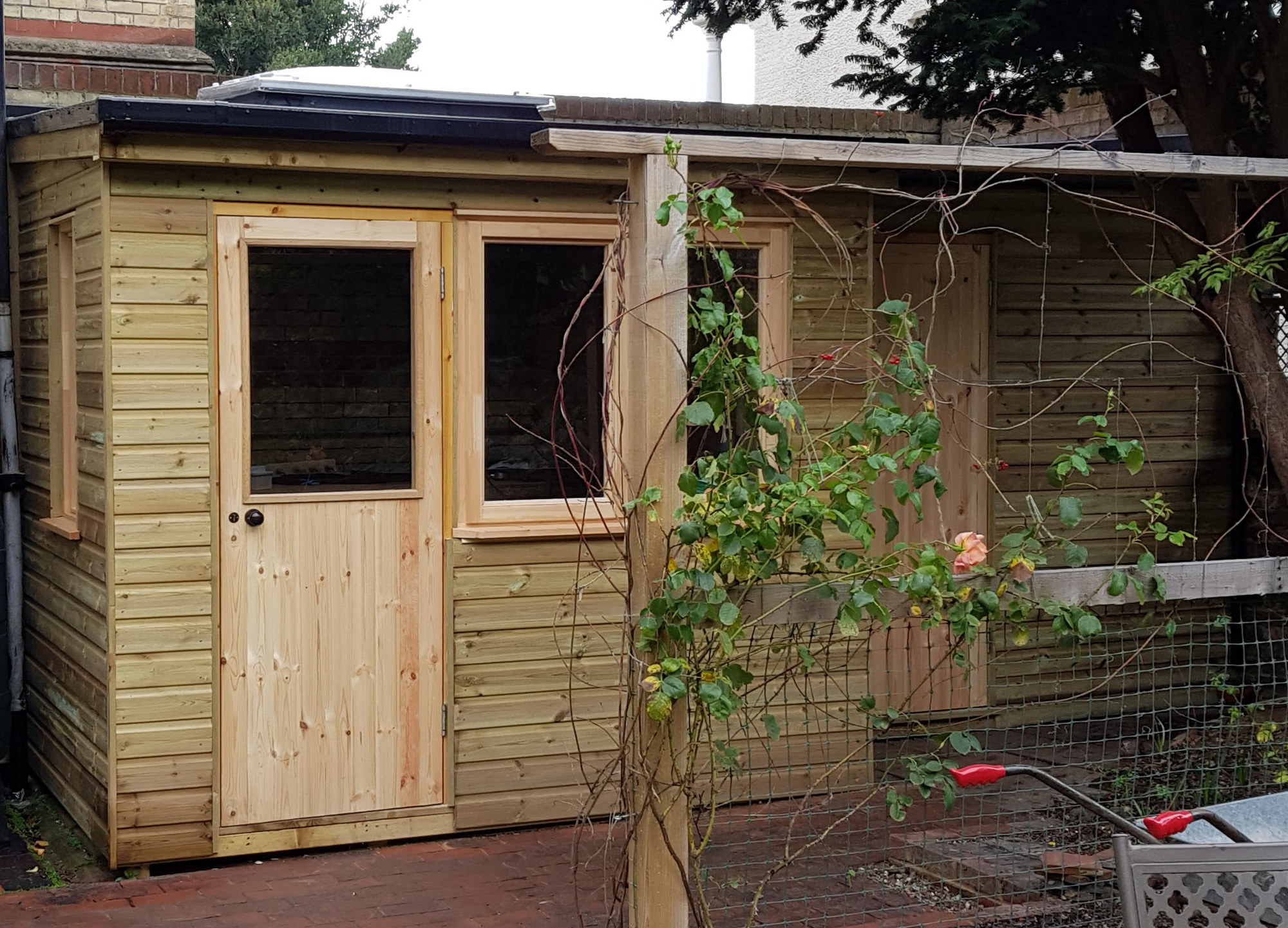 We were pretty pleased with the final structure – much more space than we had before, and room to store all the STUFF we used to cram into the summerhouse. November was a bit rainy, but we managed to get a coat of paint on to protect the wood before the winter got going. I was also determined to decorate the interior of what was destined to be ‘my’ space!! 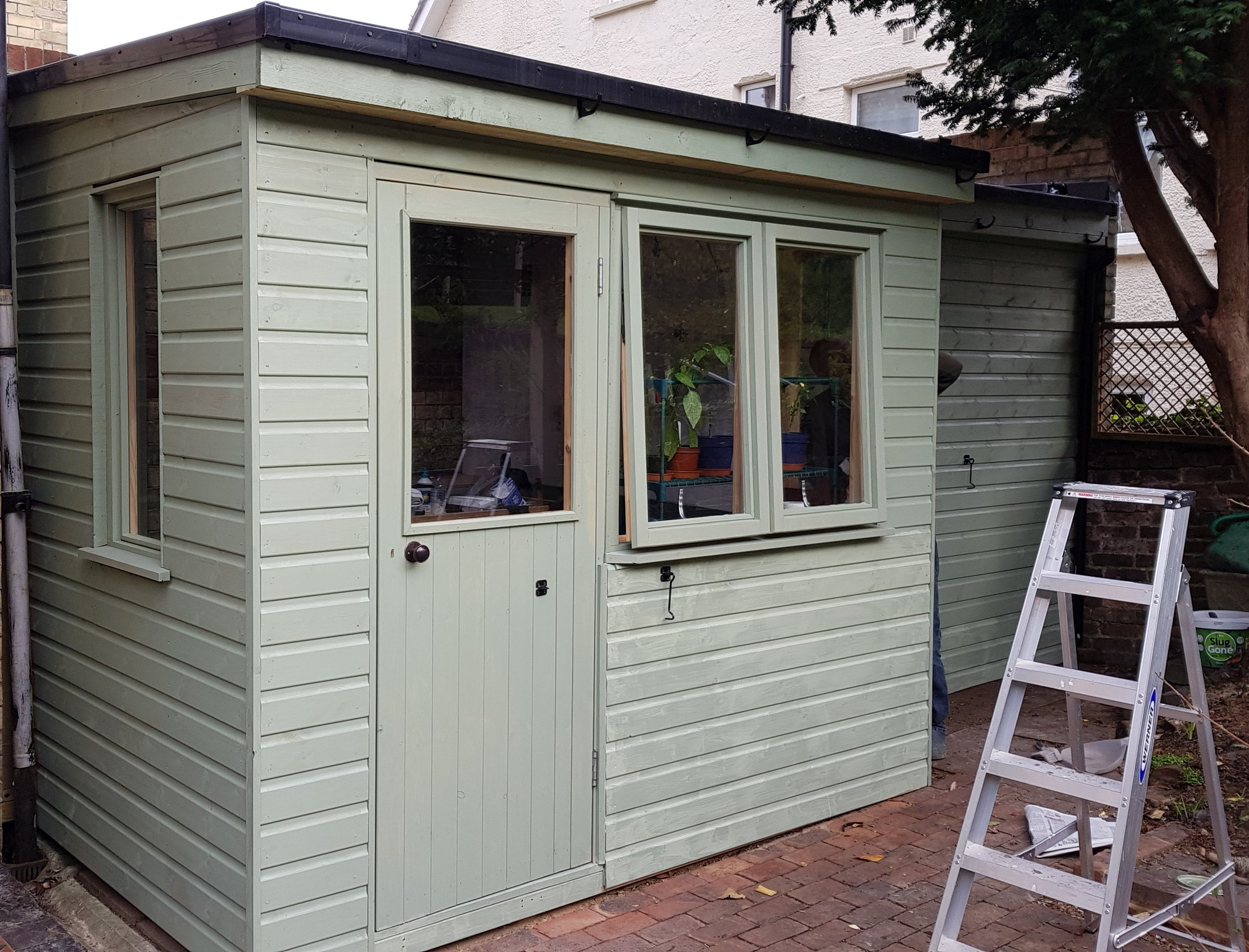 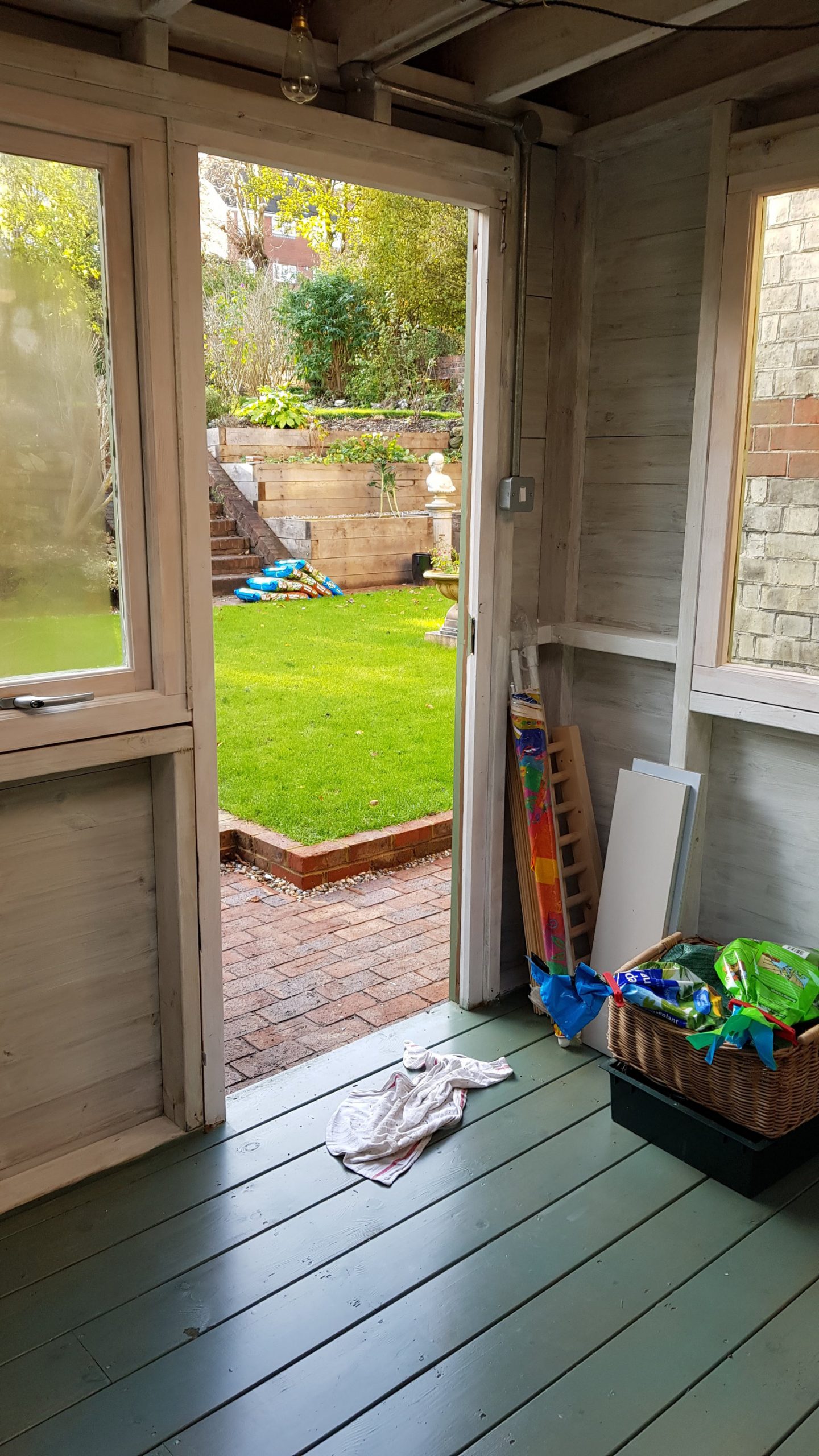 All the interior timber got a whitewash (makes it brighter!) and then I could resist painting and varnishing the floor.

My big indulgence was a ‘poetry wall’, papered in favourite and garden/nature themed poems ripped from poetry magazines, then varnished. I had no idea whether it would last, but wanted to give it a go! I was also pleased with an old machinist’s chair I bought on Etsy… 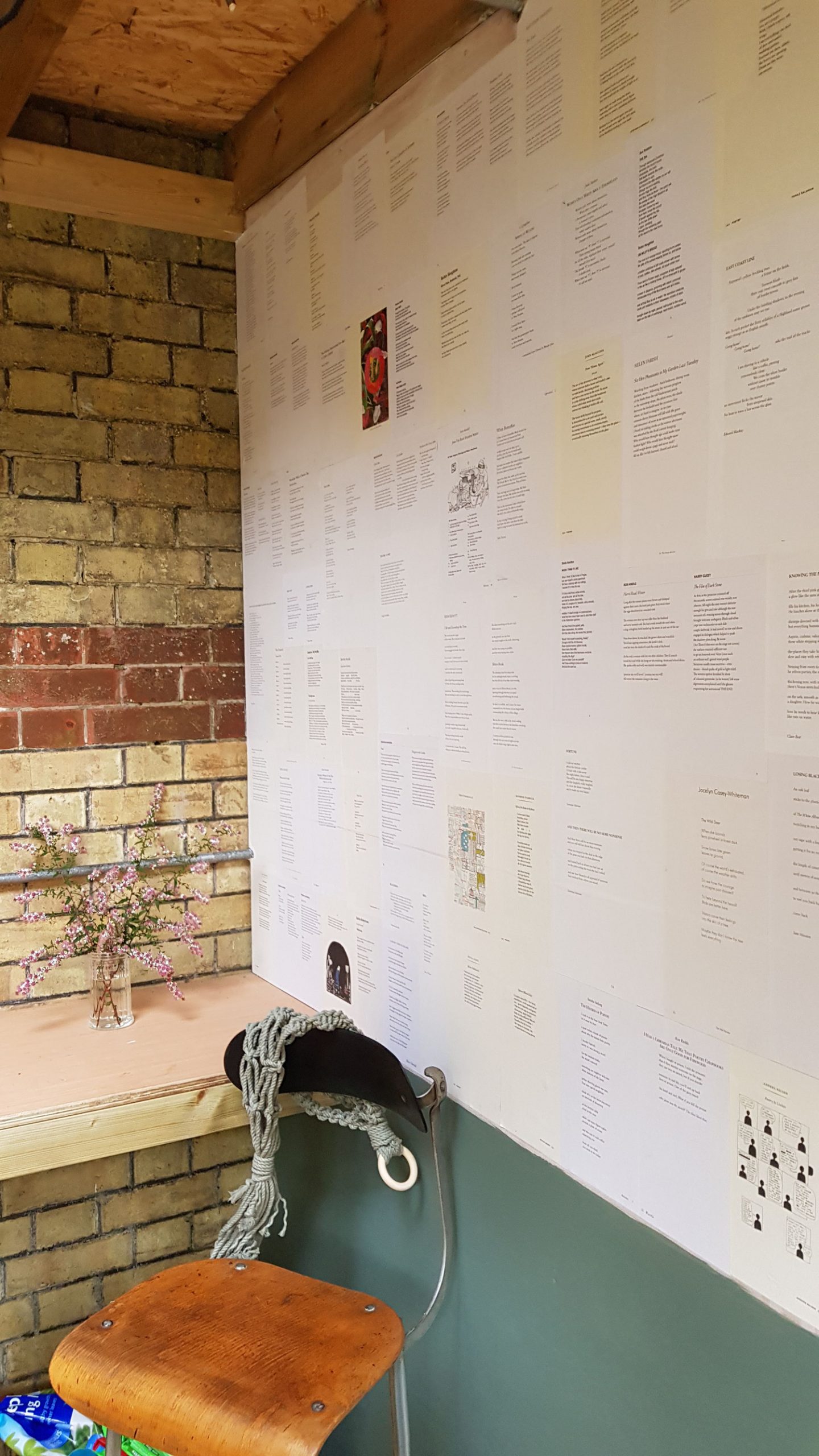 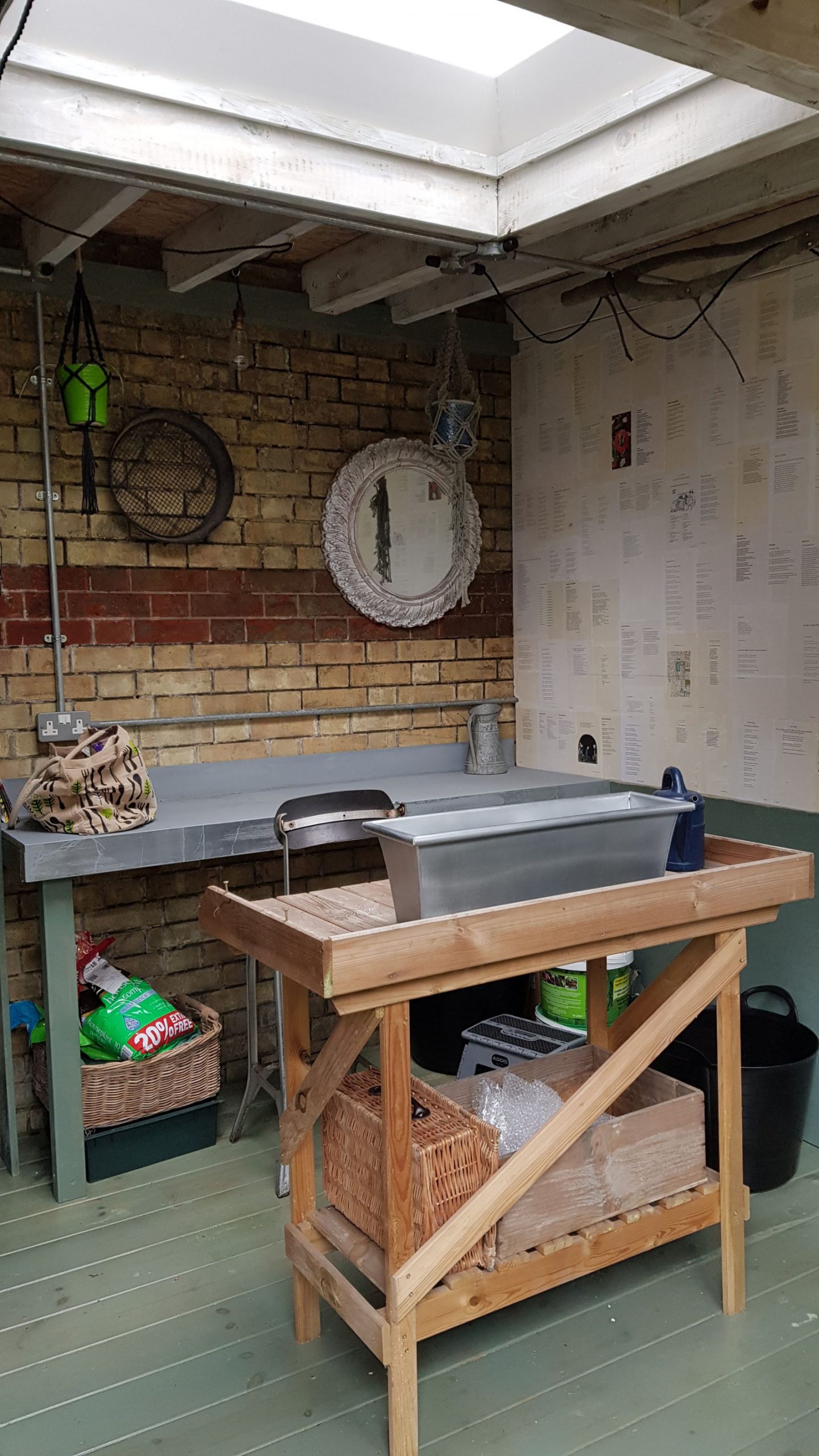 … And my pots and canes storage corner… 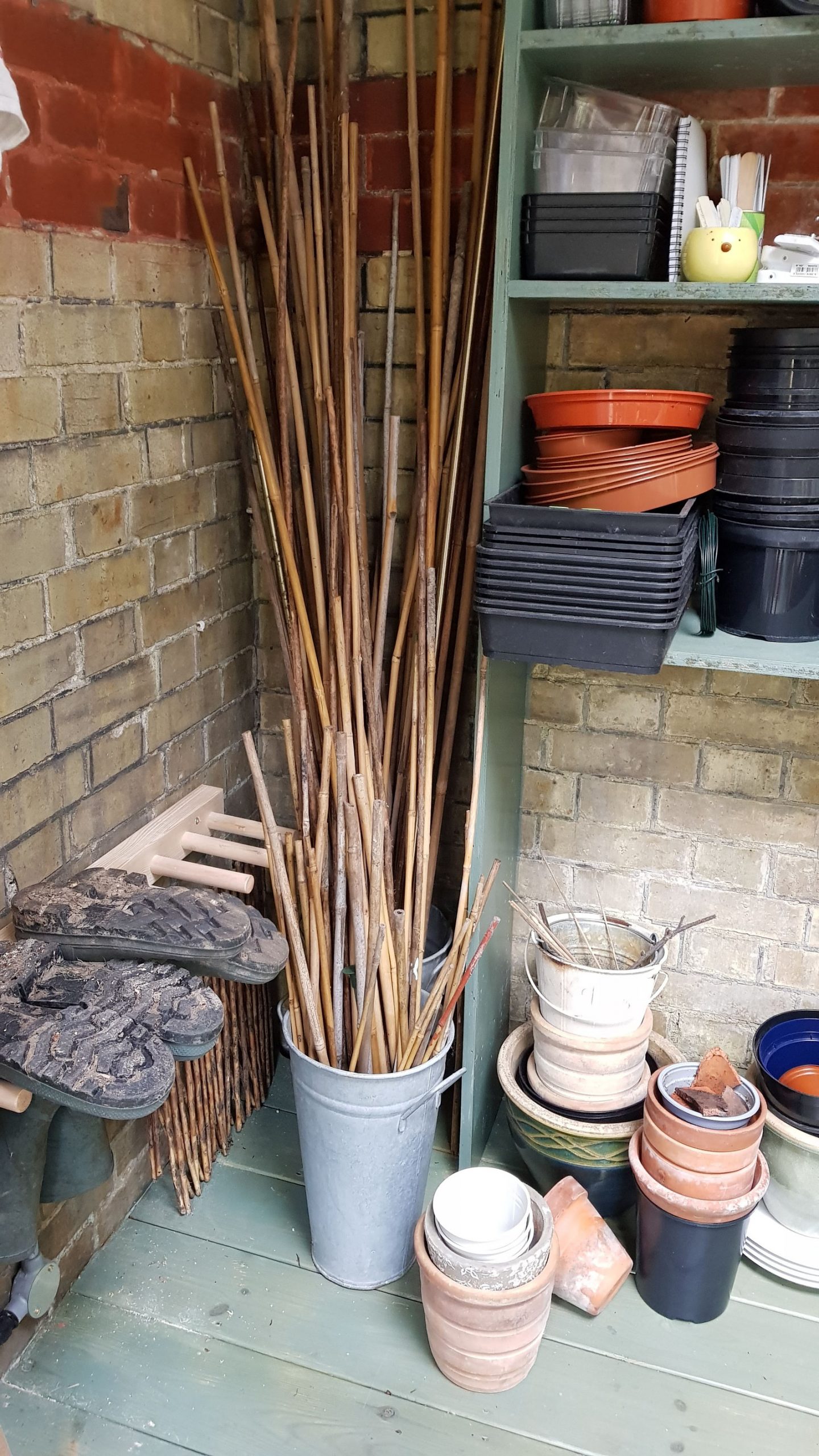 Over the winter there wasn’t much to be done in the ‘pottery’ (as we’ve named it!). It was cold in there – I put in a small electric oil-heater for when I needed to do stuff – and I put in a temperature and humidity gauge. Most of the time it was 100% humidity and the temperature stayed around 4 or 5 degrees!

Come the start of Spring, you can imagine was I desperate to get out there. We bought a heated mat for the pottery and two windowsill propagators to have in the house, and got started sowing seeds in February.

Here’s what was growing in March: 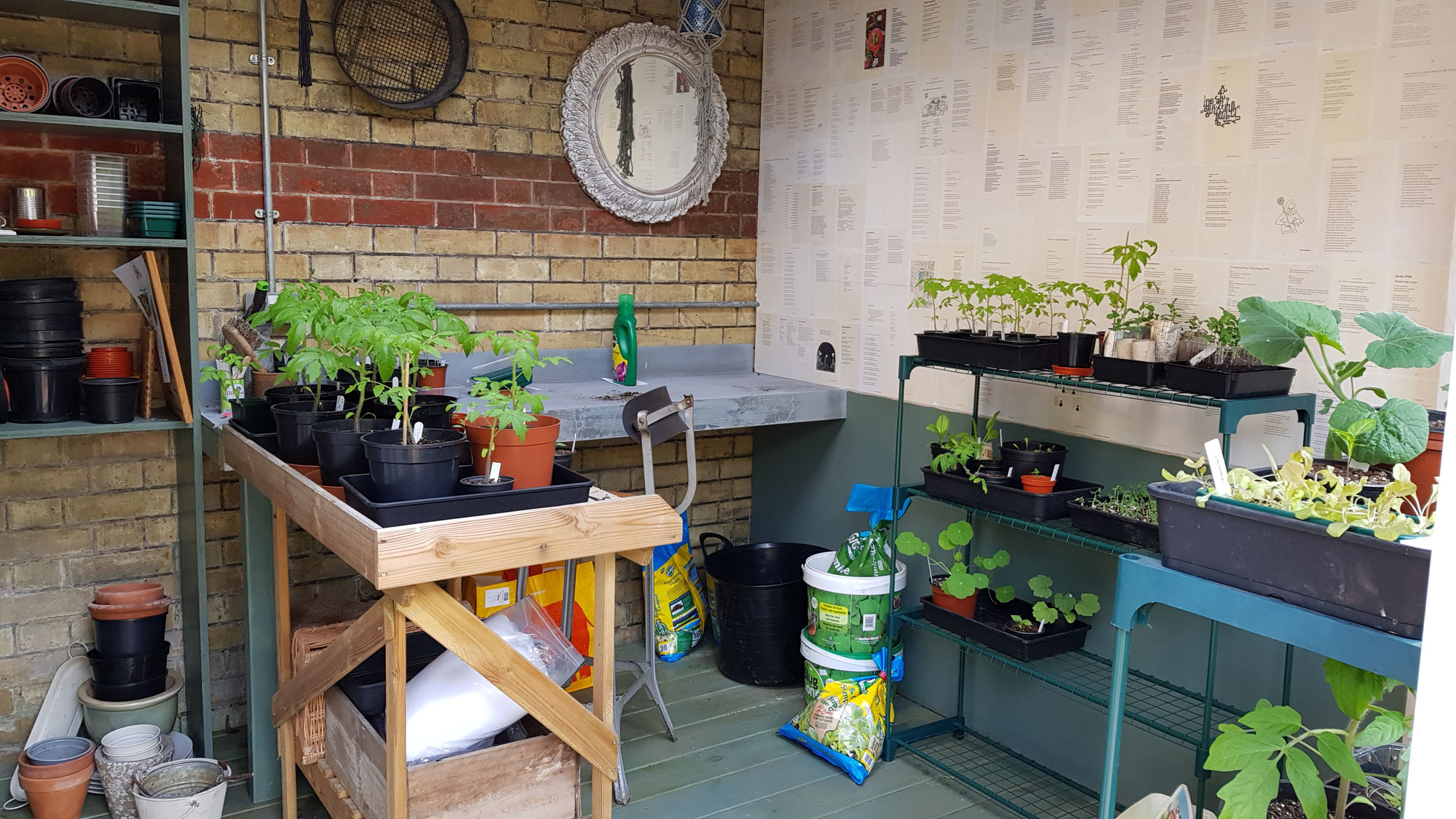 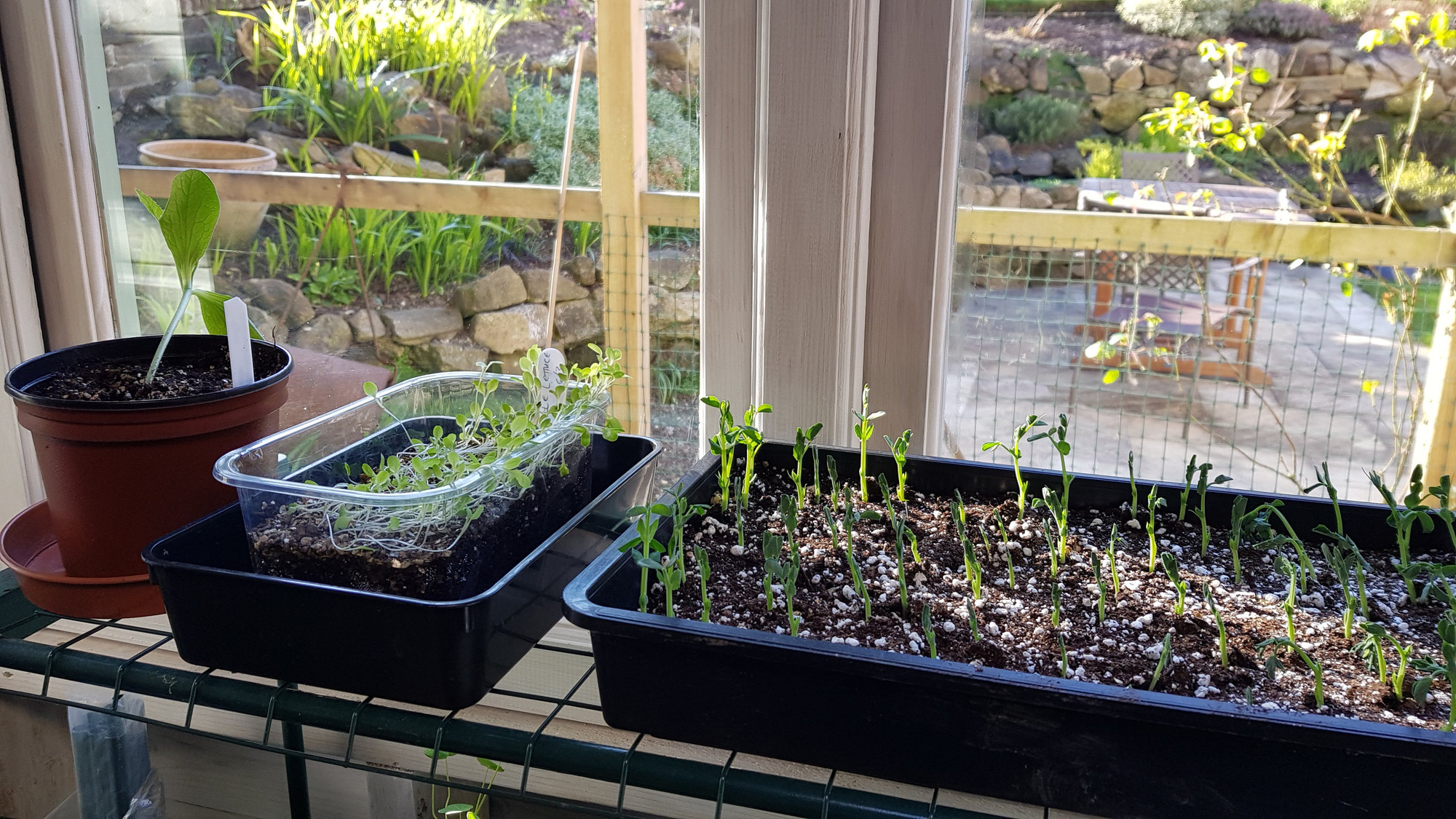 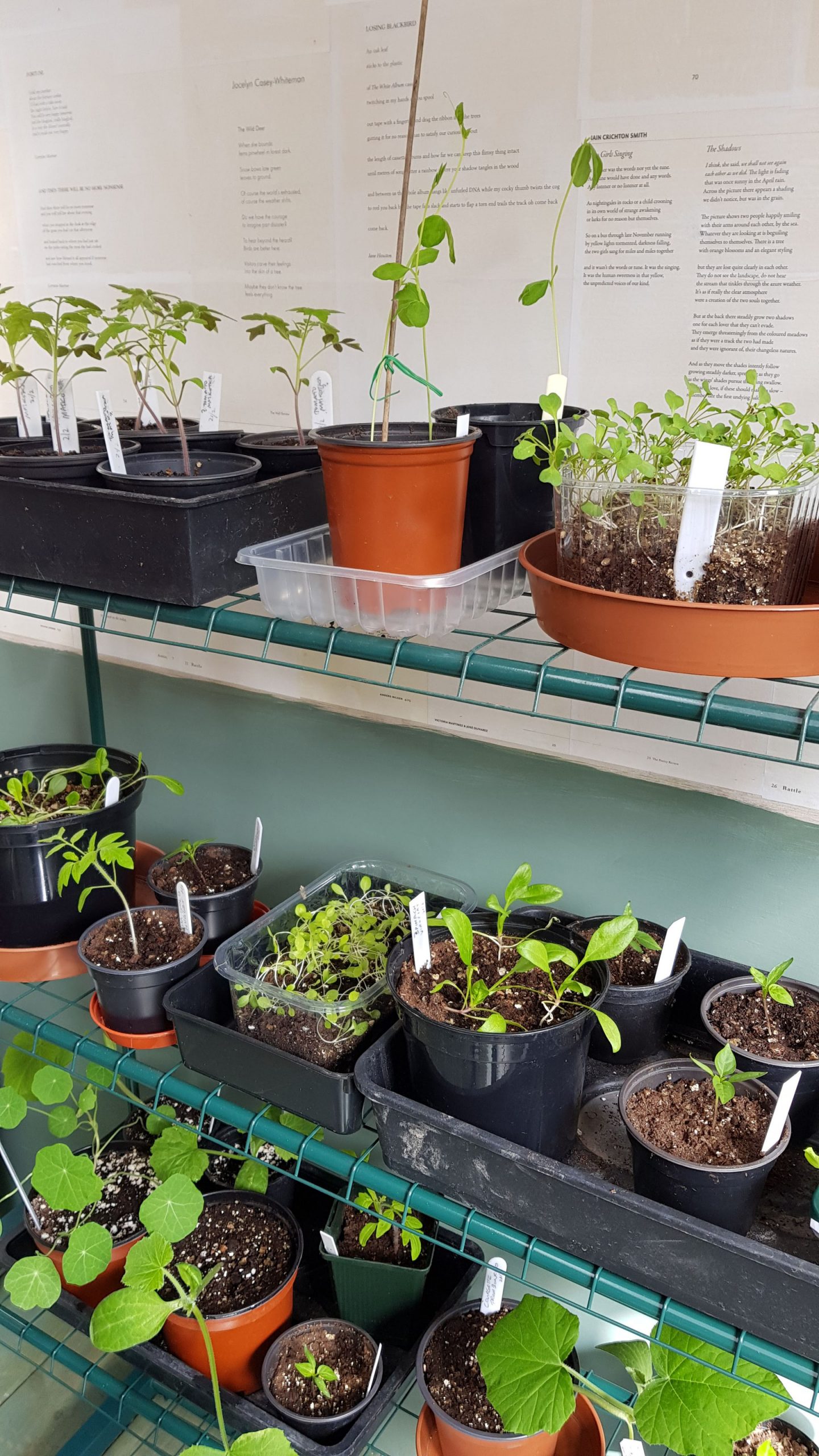 Now we’re into the fifth week of virus ‘lockdown’ there’s plenty of time to spend in growing/sowing/potting/planting and I feel so lucky to have this lovely space to work in. Not only that, but the sun has shone just about every day in April. I hope it will pay off with a bumper load of produce this summer. Fingers crossed.