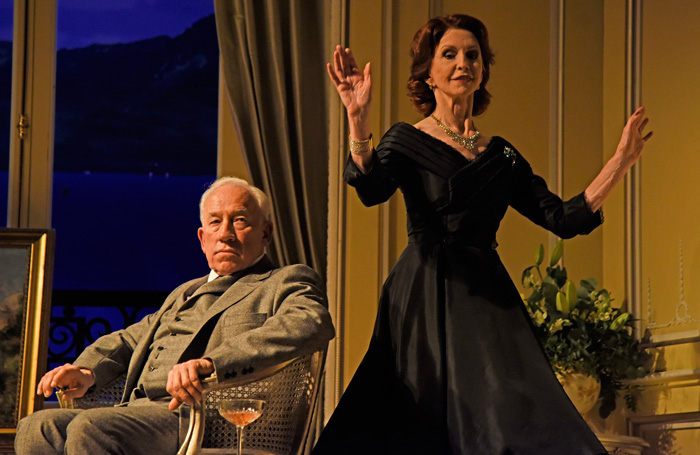 Review: A Song at Twilight

I wasn’t sure what to expect of ‘A Song at Twilight’ by Noël Coward, which I saw last night at the Devonshire Park Theatre, Eastbourne – something light and bittersweet? Waspish dialogue? Witty musical interludes? But this was written forty years after ‘Hay Fever’. Its themes of ageing, trust and forgiveness, coming to terms (or not) with the truths of repressed lives and past sorrows, are far from lightweight.

The play is the last of three that make up Coward’s ‘Suite in Three Keys’ (1965), all set in a luxury hotel room overlooking a Swiss lake. With just four actors, two of which carry the action for the majority of the two and a half hours, it’s has the potential to be intense, even claustrophobic.

Simon Callow in the central role of Sir Hugo Latymer has a great deal of fun with the dialogue, giving explosive emphasis at just the right moments and entertaining us with his world-weary looks to the audience. A writer seemingly at the height of fame and success, yet rude and irascible from the off, Sir Hugo is someone who has clearly mastered the art of the put-down, and uses it to assert his sense of control and grandiosity. When an old flame (Carlotta) comes to supper, she keeps him in suspense as to the reason, and this sends Sir Hugo into a spiral of anger, frustration, accusation and self-pity.

I found I had to remind myself of the era in which this play was written and first performed. I suspect much of the enjoyment of Coward’s acerbic dialogue depends on having an understanding of the period. The war had only ended twenty years previously and the country wasn’t long out of austerity. Britain was facing an invasion of American popular culture (where no-one knows how to cook a steak correctly and men have names like ‘Spike’!) There were times when the action felt overly repetitive and drawn out and this could partly be down to my viewing it from a twenty-first century standpoint.

This aside, the play takes on big questions about human nature and morality that still resonate. By denying one’s true nature, is one living a lie, and thereby deceiving (even betraying, as Carlotta would have it) those closest to you? What about if those closest to you are complicit, and rather than feeling used, are they in fact just accepting the harsh realities of societal norms and making the best of it?

Jane Asher in the role of Carlotta looks exactly right as the glamorous interloper, although I wasn’t convinced that Carlotta’s ‘devil may care’ act was hiding any real menace. Jessica Turner‘s stoic Hilde was by contrast believable and moving. The fourth character, Felix the butler (played by Ash Rizi) appears mostly as a foil, although apparently he is the only character to appear in all three parts of ‘Suite in Three Keys’, which in itself is rather intriguing.

Described by the playwright as a comedy, ‘A Song at Twilight’ is closer to a tragedy in the Shakespearean sense. There’s much to enjoy in it, and many layers to unpick. Were this not the Sixties I feel we would learn more about Sir Hugo, around whom the action takes place, but whose character and motivations are left unexplored.

A Song at Twilight is on at the Devonshire Park Theatre until Saturday 6th April.

Photo of Simon Callow and Jane Asher by Nobby Clark