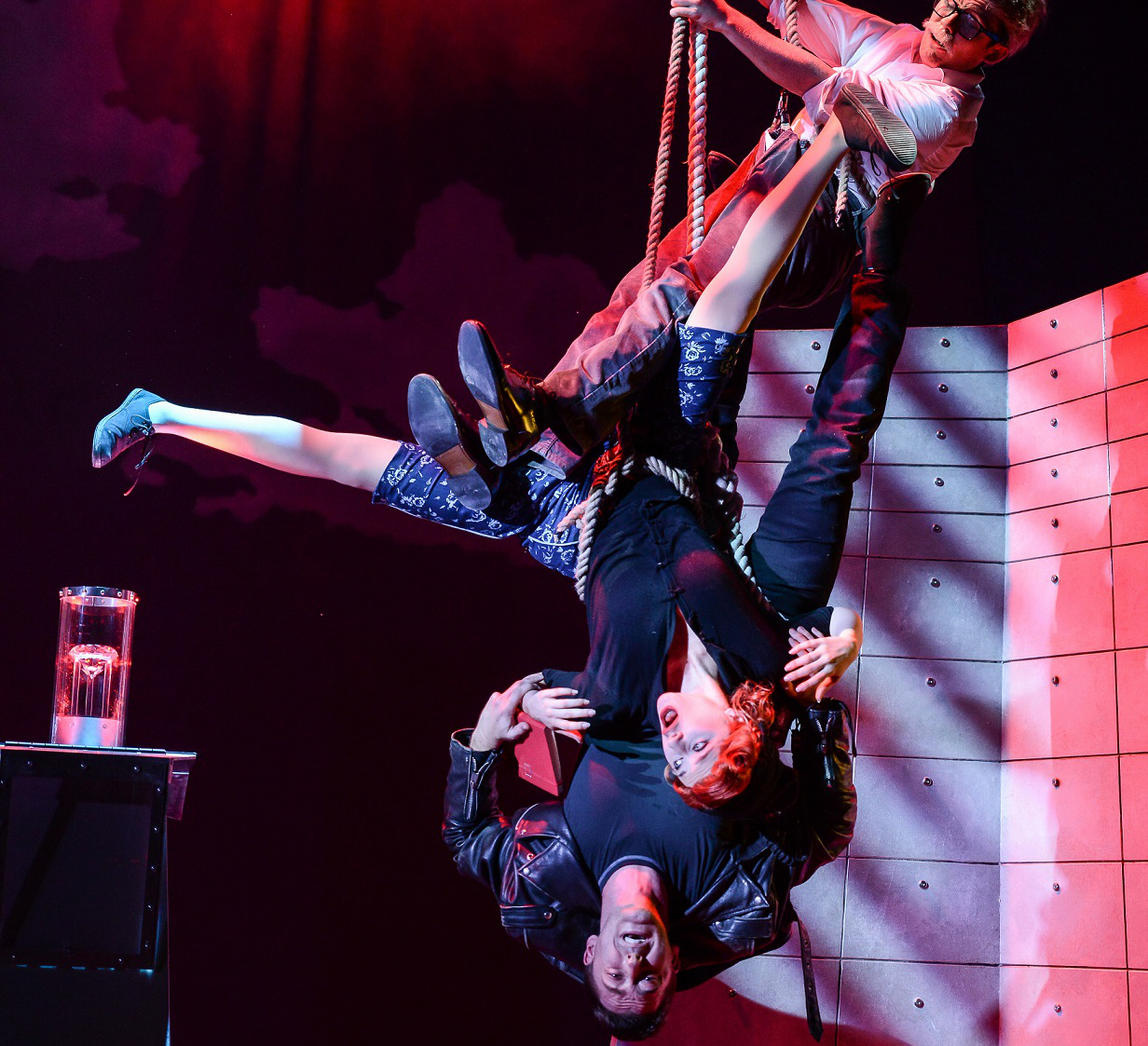 Review: The Comedy about a Bank Robbery

When the title of a play is ‘The comedy about…’ it sets rather high expectations. And one person’s ‘comedy’ can have another person checking their watch. So it was with slight trepidation that I went to see The Comedy About a Bank Robbery last night at Eastbourne’s newly refurbished Congress Theatre (more about that in a sec).

I needn’t have worried though. This was a high-octane farce in which the writers clearly had fun with all the classic elements of comedy including a silly plot, slapstick set-pieces, farcical misunderstandings, over-the-top characters, recurring jokes and ridiculous disguises, as well as Buster Keaton-style acrobatics. Production company Mischief Theatre lived up to its title, the play poking fun at everything from overblown ‘heist’ movies to amateur dramatics.

In amongst the mayhem we had songs and vignettes, some of which passed by so quickly the audience was danger of missing them. Sometimes it wasn’t clear what was going on, but it didn’t really matter! For me, some of the pantomine scenes between two characters were a bit too drawn-out, but there were many gems, such as a momentary recreation of the dying moments of ‘Casablanca’, and the random appearance of a hilariously inappropriate portrait of the bank manager.

The fifties setting with its costumes, props and close-harmony singing was fun, and I even didn’t mind the vast range of American-ish accents, since the question of ‘where people are from’ also became a running joke.

Particularly impressive were the inventive sets and the use of trapeze work. I loved the scene when we’re supposedly looking down on an office from above, and a hapless clerk is trying to pour his boss a cup of coffee. This was genuinely funny and very clever in the way the audience was ‘in on it’.

Great performances all round from the young cast, particularly Julia Frith as Caprice and Sean Carey as Sam. Damian Lynch as the bank manager Robin Freeboys was excellent, and just got funnier every time he walked on stage.

‘The Comedy About a Bank Robbery’ by Henry Lewis, Jonathan Sayer & Henry Shields is at the Congress Theatre until Saturday 20th April.

Just a word about the Congress Theatre, which has undergone years of refurbishment inside and out – I really liked the way the interior has been brought back to life, and the auditorium is lovely, still with the wood veneer and the sweeping curves. I do find the raking a bit inadequate in that I had a big chunk of the stage blocked off by the head of the man in front (but we were able to move for the second half). One big plus is the air conditioning which felt perfect to me – not too hot or too cold. I know, I know – but these ‘small’ things are important!

Things are perhaps not quite finished in the foyer and bar area, with some temporary signage and not quite enough seating or perching tables. But the vast views out of the windows, the pendant lights and the colour schemes are all wonderful and the building feels proud of its mid-century modern heritage. The new ‘Welcome Building’ is still a work in progress but I hear there will be a big cafe area looking onto Devonshire Park, and the landscaping outside on Carlisle Road is promising. A big shout out to the staff also – everyone unwaveringly helpful and polite.

Eastbourne is rightly proud of its Congress Theatre. There’s more info about the Devonshire Quarter development here. I wish the town were equally proud of its other mid-twentieth century gems such as South Cliff Tower, but that’s another blog post. 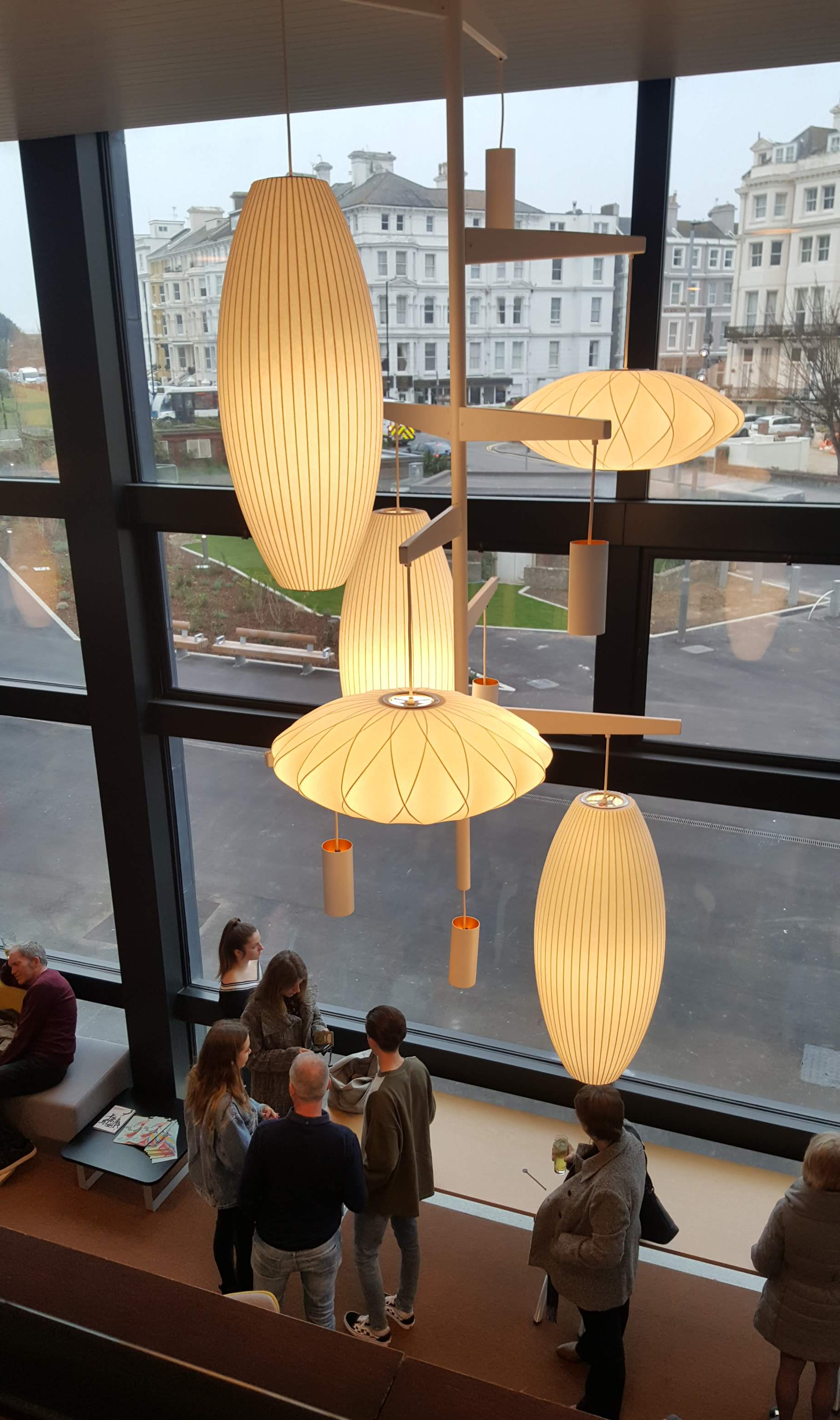