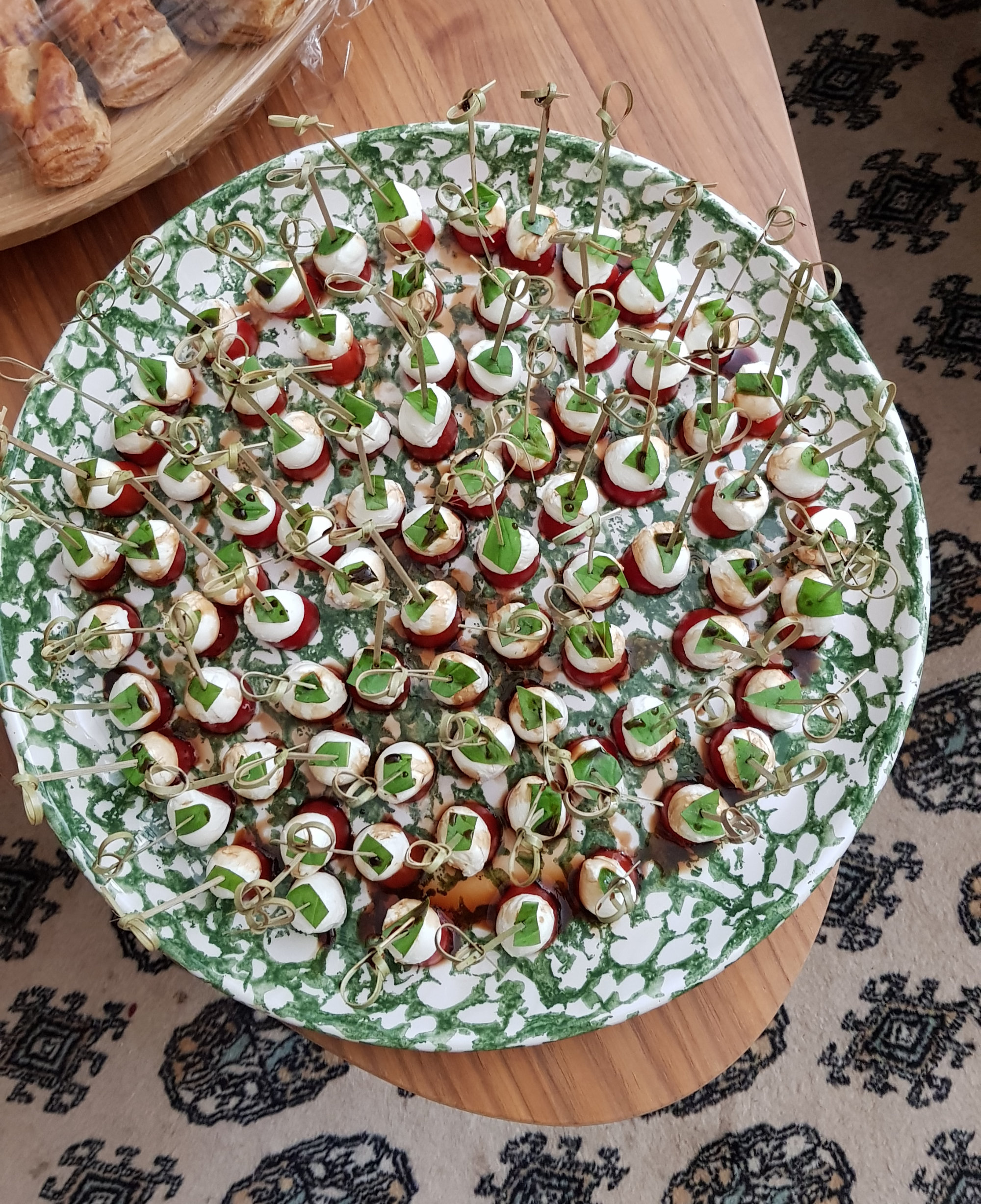 July: apricots, garden party… and the power of co-operation

What a month. Lots to tell you.

We got the sunshine we wanted for our annual garden party, and the whole of July in fact, if the weather carries on like this for another week. This morning we had a very short but heavy shower, leading me to call RAIN! to Nick in the next room. The plants are so dry, even the tomatoes look like they’re hanging on by a thread. Anyway, I’m not complaining, of course.

Earlier in the month I was so excited that an American friend and former work-colleague from my adidas days was over in London with her work, and I was going to meet her there for lunch. But turned out she had a whole free day before going home – so she took the train down to Eastbourne to see us. Anna lives at Hermosa Beach in California, so I was keen for Eastbourne to live up to its ‘sunshine coast’ tourist tag and not embarrass me! I’d like to thank all the relevant gods for producing a warm, sunny day for us to have lunch in the garden and walk along the beach. A brief but lovely visit, ending with cocktails at the Grand Hotel. Come back soon, Anna! 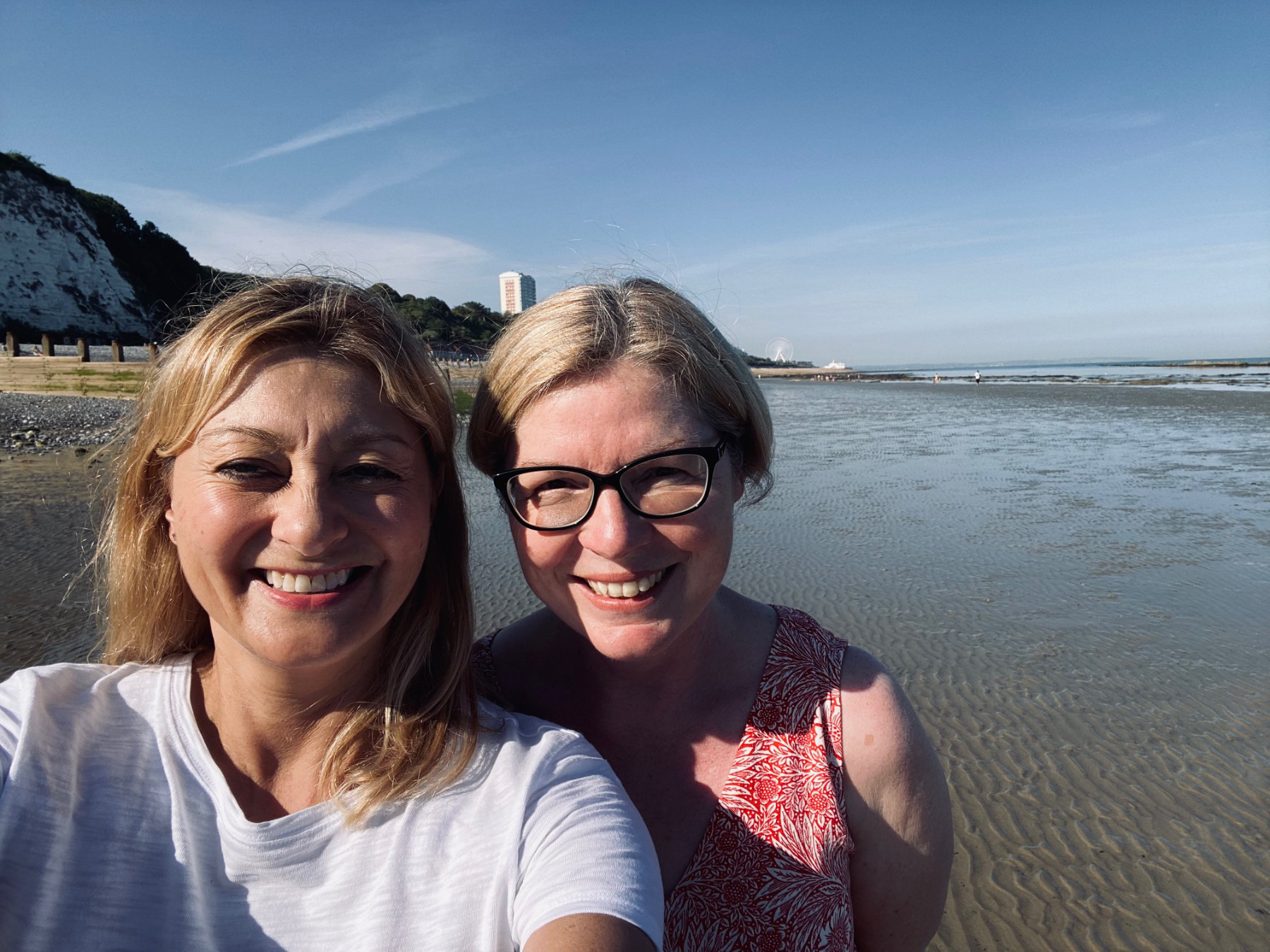 The garden party… and apricots

It all went wonderfully and although my good friend Lucy wasn’t well and couldn’t make it down for our usual pre-party morning of gossip and canape-making, I was very lucky that another friend, Alison, was able to help. She turned out to be super-organised and very talented at making things-on-sticks…

Now look at this: the apricot that we planted four years ago has borne fruit! Not just a couple of little green things like last year, but four actual, ripe apricots! One came off in my hand as I was admiring it, so I made sure the others stayed on for the garden party, so I could show them off. We’ve now eaten all four of them and I have to say they were perfect. Next year: apricot jam? 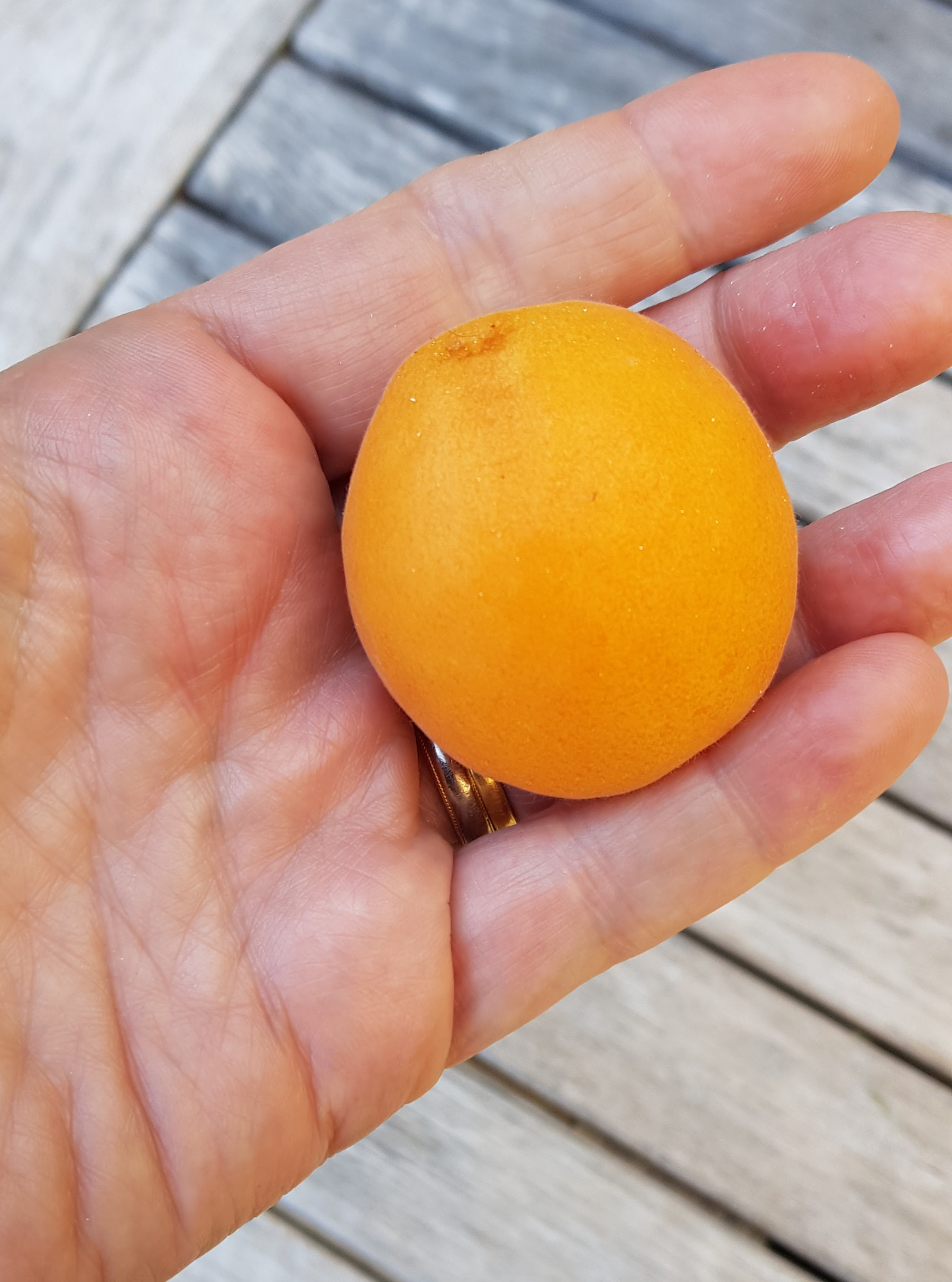 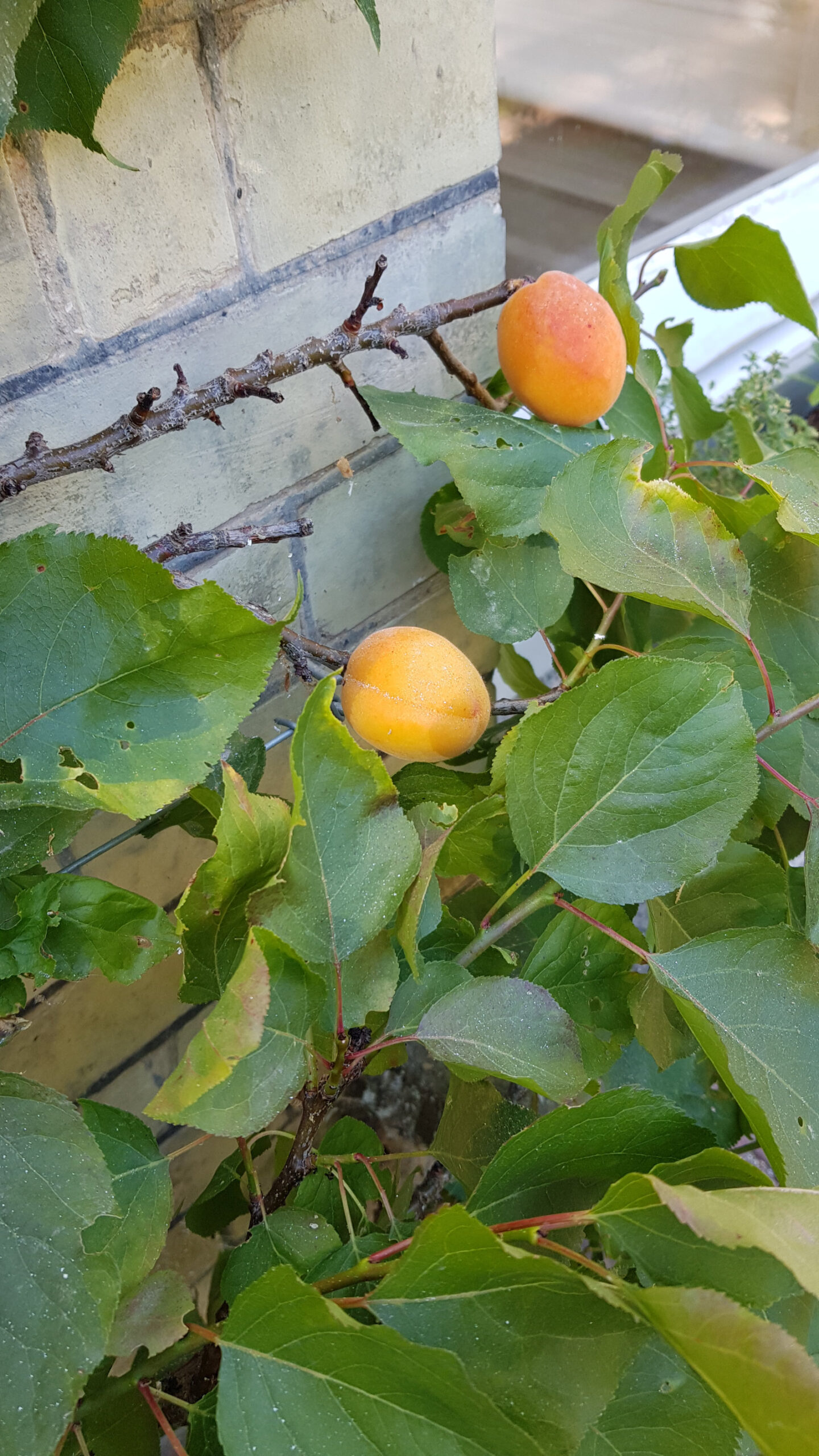 If you look closely you may wonder what the little white spots are all over the place. They are specks of 140-year old paint scraped and sanded from the house windows and soffits. We’re in the middle of having all the external paintwork renovated. After twelve weeks the scaffolding finally came down just a week or so before out party. Hurrah! We’d tried to protect the plants that were in the line of fire, but somehow those micro-specks manage to get through even horticultural fleece. Now the decorator has shifted to the ground floor level to do our living room windows and back door. So more clearing up to come. Still, lovely smart paintwork on its way.

At the end of this week we have a Lewes Singers concert, actually a pair of concerts – we’re singing in Iford village church on Friday evening, then repeating it on Saturday at St Thomas’s in Lewes. We’re a very small group for this one, just eleven (or possibly just ten) singers. We’re waiting to hear whether our second second-soprano is well enough to join us for Wednesday evening’s rehearsal. Yesterday afternoon was our first rehearsal, and although most of what we are singing is repertoire, there is absolutely nowhere to hide when you’re singing two or one to a part. The reputation of the Lewes Singers is at stake, and no-one wants to be the one who hasn’t learnt his or her part inside-out!

Yesterday I was driving to Lewes to meet Nick for our choir rehearsal, and it all seemed pretty straightforward, until I came to a stationary queue on the A27. After a few minutes of inching forward, I started wondering how much fuel I was burning with the air conditioning on. But it felt like 30 degrees with the window wound down. What to do? A quick check on Google Maps told me there’d been an accident up ahead and it was a 35 minute delay. BUT if I took a suggested detour through the village of Selmeston I could save 10 mins of queueing. Alas, dear reader, I did it.

After a leaving the road and nipping through Selmeston, feeling rather pleased with myself, I duly turned left onto what turned out to be a single-track road with no passing places. And about half a mile along it, guess what? Another stationary queue. Except this time it really wasn’t moving at all. Far up ahead I could see a camper van and who-knew- how-many-other cars facing off my steadily-growing line of west-bound vehicles. Here’s what happened: 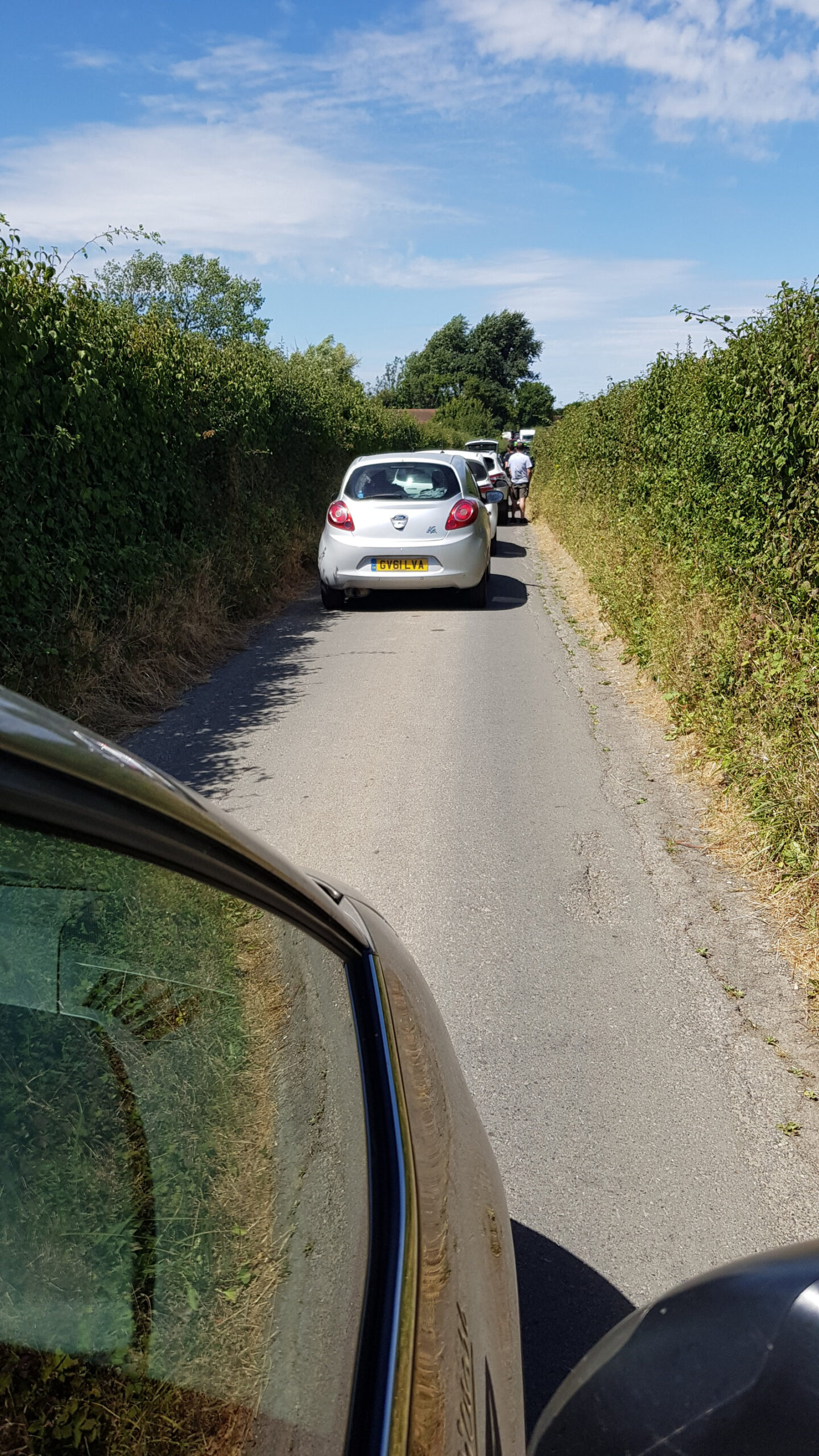 After a few minutes, drivers started to get out of their cars and crane their necks to see what was going on. Some left their cars and walked up ahead towards the stand-off. Some of us turned off our engines and waited, hoping something would happen. But what? More cars were building up from both ends of the mile-long lane, so backing up was seemingly impossible. the driver of the car behind me stormed back to his car, complaining loudly, but without any apparent idea of what to do.

Eventually, a group of three or four men seemed to have formulated a plan. One of them walked up ahead as far as he could, firstly to persuade cars to turn back or back up if they could. I guess another did the same in the other direction. A third guy near us opened up the gate to a field, bone-dry after the harvest, and ushered a dozen or so cars from the queue (including me) into the field. He said the plan was to try to clear the backlog of cars coming towards us, then we could get back onto the road and continue our journeys. Driving into a field on the orders of a stranger, waiting there in the middle of nowhere with others, hoping the plan would work, the sun beating down, running out of drinking water… it was all increasingly bizarre. I suppose other fields were being utilised further down the queue in a similar way, I don’t know. 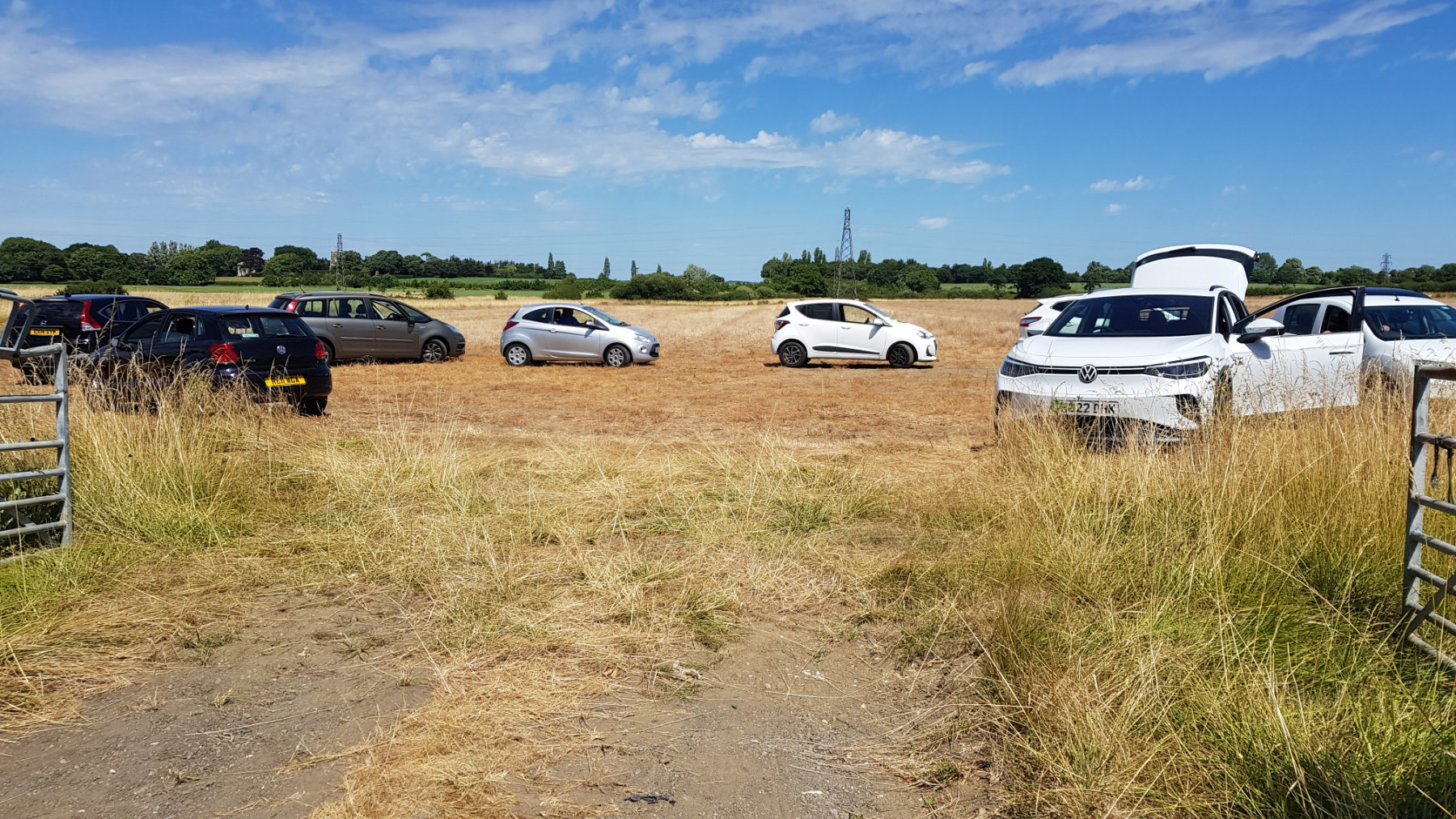 I left my car and joined the men who were monitoring the situation. A woman said her husband was one of the those who’d gone up ahead and he’d call her to give a signal when it was clear for us to go. After a while, we were told to stand by. I returned to the car, and watched as the camper van went through, with a number of cars behind it. And would you believe it, we started to creep out back onto the road. It worked! We were free! I was sad that I didn’t get to thank the men who had solved it, and although my 35-minute journey ended up taking nearly two hours I was left with a warm fuzzy feeling: the co-operation between complete strangers is a powerful thing!

PS: I will think twice about taking a Google shortcut again 🙂