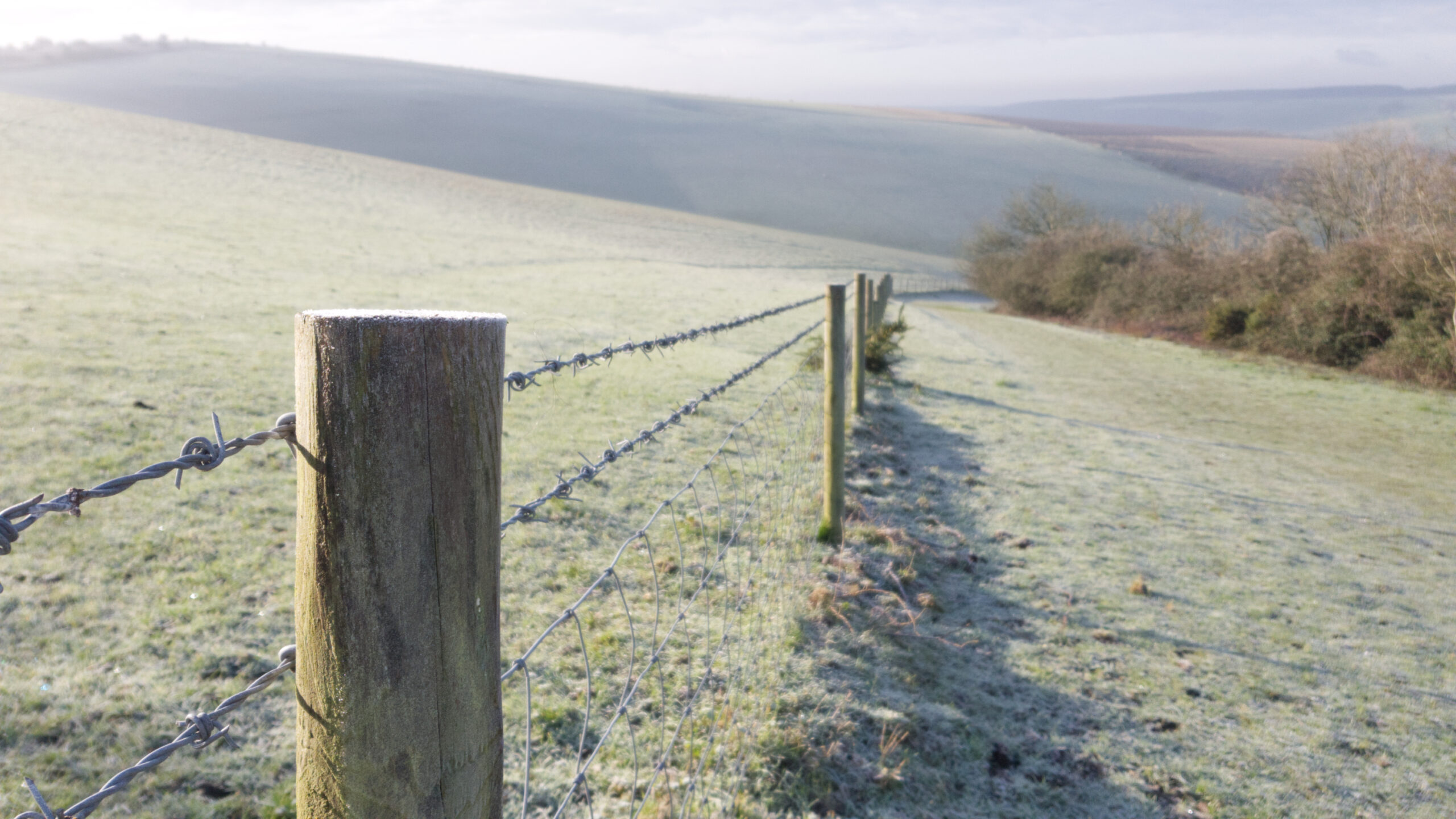 The other week we took advantage of a sunny day and went for a walk up on the Downs above Willingdon on the outskirts of Eastbourne. It was cold though! The colours of the landscape took on a look of those Ravilious prints…

We headed towards the village of Jevington, keeping this fence on our left, downhill all the way and very beautiful. Jevington is a pretty village and we entered the Main Street right by what used to the restaurant The Hungry Monk, now converted (back?) into cottages. It claims to be the ‘birthplace of the Bannofie Pie’, although there is some dispute over it. Nevertheless the building has a commemorative plaque! I remember having Christmas Day lunch there sometime in the 1980s with my first husband, and it cost £50 each, which at the time felt like a huge amount of money, especially as we had to get taxis there and back from Brighton, which wouldn’t have been cheap. It was a lovely experience though! 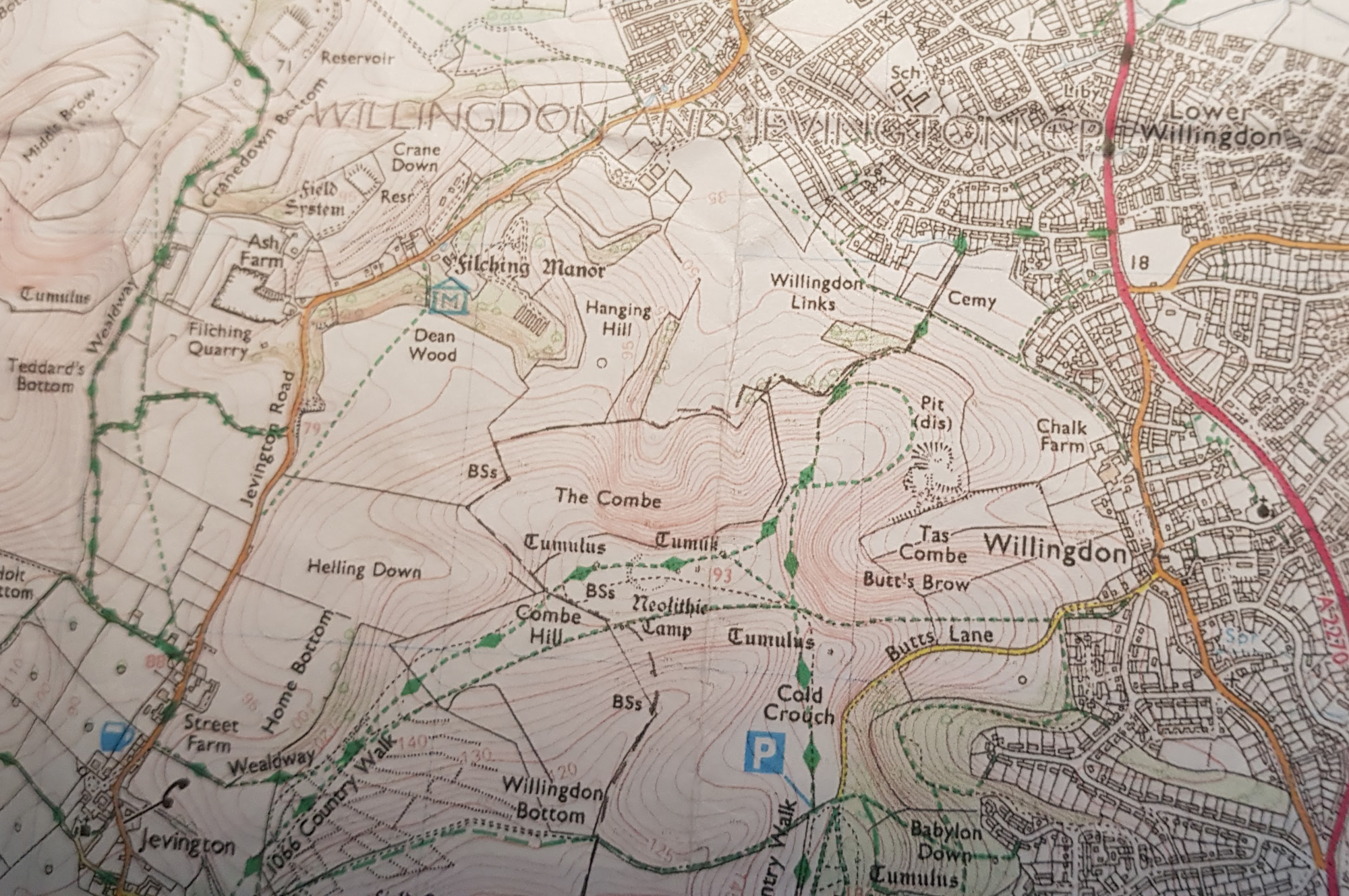 From Jevington we took a footpath across a field towards Filching Manor. We didn’t actually see the house as the path went steeply down through a wood, and it was extremely muddy and slippery. The only trees to grab hold of were saplings which bent and swayed, so they were no help. I managed to only fall over once, and got away with nothing more than a muddy backside. Filching Manor used to house a motor museum and a go-kart track, but it seems to now be closed.

Emerging onto the main road at Filching we met a couple coming our way, who warned us that the stream at Wannock Glen was very high and the path was impassable. Not really understanding whether that would affect us or not, we carried on the path we intended to take, through Wannock Glen. Although on the map this appears as a footpath close to and alongside the road, in reality the path traverses a steep slope between trees and down to a stream. You can’t even hear the road on the other side. Did I mention how wet and muddy it was on this walk?! I was fearful of sliding down into the water, and kept thinking of how when you ski along the side of a mountain you learn to lean your upper body ‘away from the mountain’ to avoid falling, which feels counter-intuitive at first!

Part way along the path we could see some concrete slabs in the river. I’ve since learned that these were part of the foundations of a ‘tea chalet’ that used to stand here, bridging the stream, popular in the 1920s and 30s.

At the end of the path we finally understood what the couple before had been trying to tell us – the stream was in full flow and instead of a path across there were just a couple of logs next to a little concrete weir from where the water cascaded several feet down. Nick decided he could get across, with the help of a thick stick he had found. I could hardly watch! Then it was my turn – I was on the point of turning back, but my boots are pretty waterproof so I decided plunge into the water and ‘crab’ my way across, feet on the concrete and hands on the logs – success! It was easier than I had been imagining. That was the main bit of excitement for the day! After that, the walk across the ‘Paragon Fields’ of Wannock (community land) was easy, although the steep climb up the hill after that was less so. Great views across Eastbourne at the top though. We saw a few people out for the fresh air but for most of the walk we were on our own. These days the seafront is so crowded and we’re very lucky to have such beautiful countryside on our doorstep, to get away from everyone.