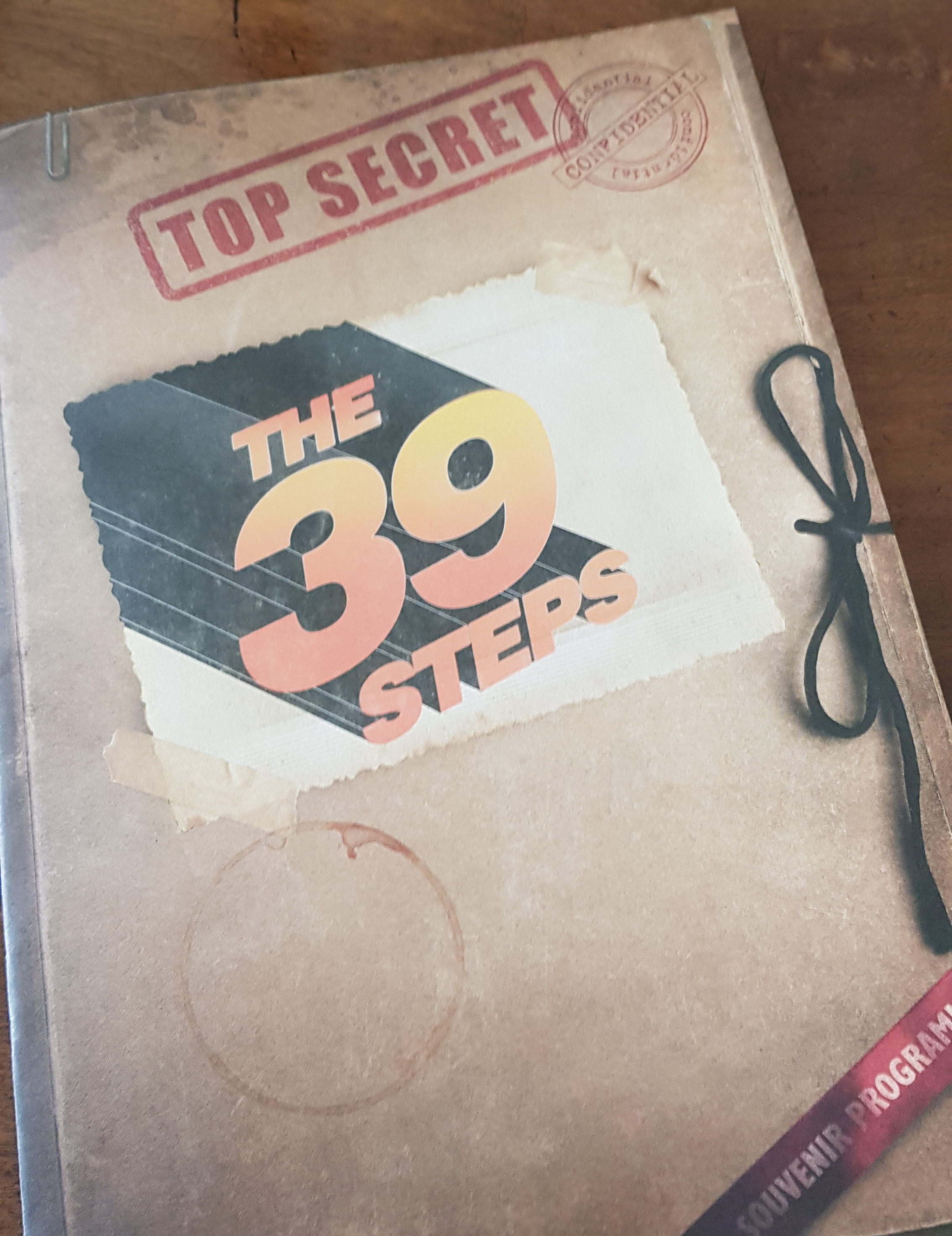 One of the fine things about living in Eastbourne is that we can walk to the theatre. Last week we were in the front row of an outdoor, in-the-round performance of Romeo and Juliet by the Eastbourne Operatic & Dramatic Society (EODS), with the sea as balmy backdrop. Yesterday, a slight change of mood and pace at the Devonshire Park for The 39 Steps, Eastbourne Theatre’s home-grown summer production which is just over halfway through its run.

Billed as ‘a comedy thriller, based on John Buchan’s classic novel and Alfred Hitchcock’s film’, I was curious to see how this would play out. How do you present The 39 Steps as a comedy? Well, you recreate the story as pastiche – a sometimes-gentle, sometimes-acerbic take on the genre (spy thriller), the period (roughly the 1930s), and inevitably the lack of tech sophistication in films of that era. Throw in some ‘ironic’ (at least, I hope they were) sterotypes (the rich, handsome, heartless hero, the goose-stepping German villain, the tam-o-shanter wearing Scots), some bad accents and you’re guaranteed some laughs. But the evening offers much more than that.

With a cast of just four, you lose track of how many parts they’re playing, and the audience is bowled along by the energy. The duo of characters listed simply as ‘Man 1 and Man 2’, played by Philip Stewart and Jon Monie, provide the comic heartbeat of the piece and every time they appeared in yet another set of costumes you just knew it was going to be funny. The policeman/newspaper seller/platform guard character switching routine was breathtaking, and the cat-stroking Scottish laird with his mouth-pursing wife (Monie in drag) was just one of many scenes when poor Hannay (Oliver Mellor) looked as bewildered as Margaret Dumont in a Marx Brothers film. The plasticity of Jon Monie’s face and rolling eyes is extraordinary.

There are running jokes about Hitchcock (see how many references to him and his films you can spot) and am-dram style scenery ‘malfunctions’. Ironically, the scenery, music and lighting, combined with cast’s physical acting skills, were far from unsophisticated. It’s hugely clever and inventive to pull this sort of thing off. It was a very good evening’s entertainment and you could tell from the audience’s cheers at the end how much they enjoyed it. Worth seeing – it’s on until August 17th. ( I would have posted a photo… but it’s Top Secret, of course…)