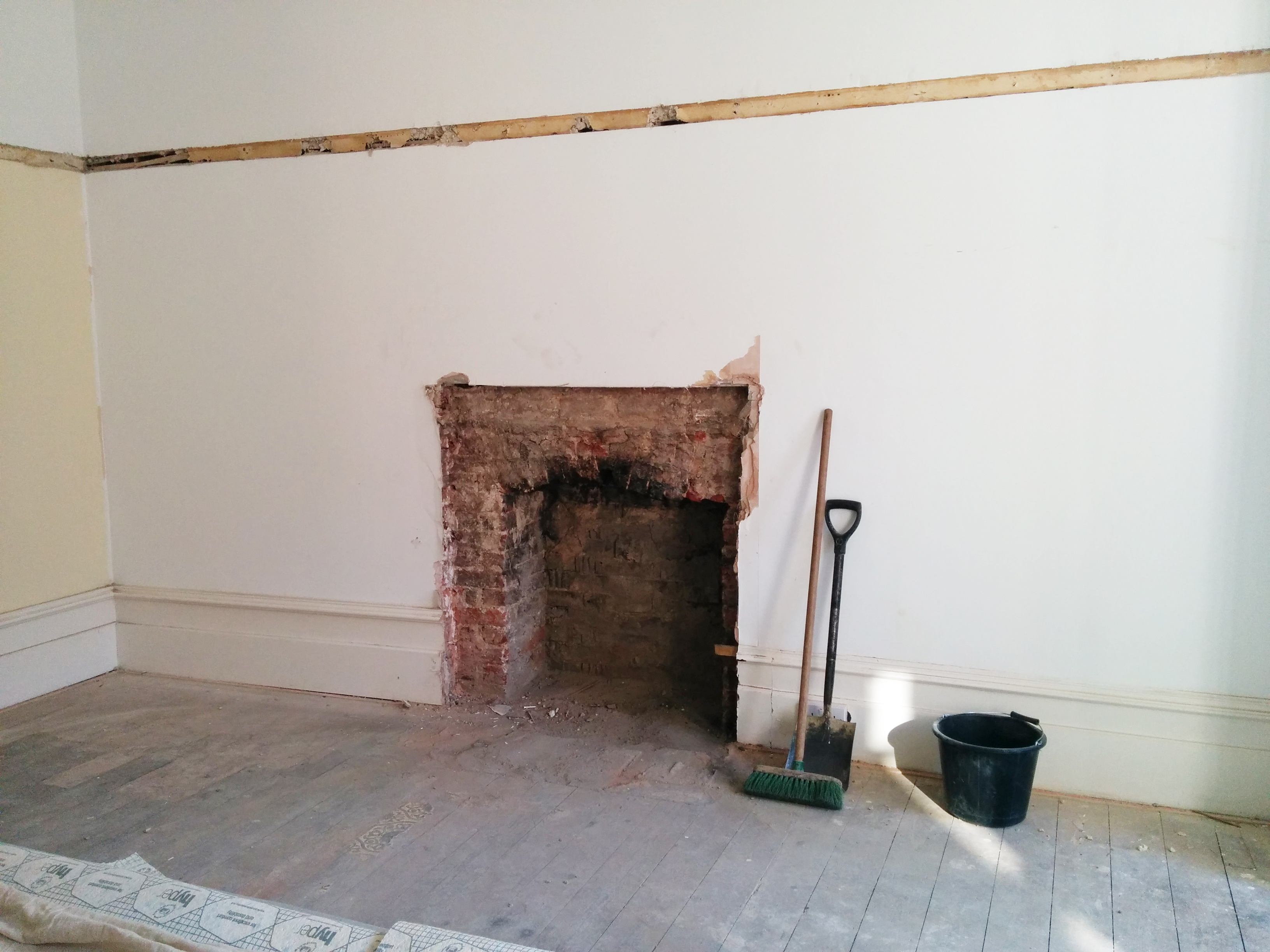 We inherited a rather ugly and non-original fireplace in the living room, which we had removed even before we’d moved in. We then dragged our feet a bit, mainly for reasons of finance. We couldn’t have a real fire as there’s no chimney any more, so we decided on a flame-effect gas stove. By September, we were in a position to have it done, but we were away most of the month so it wasn’t until October that we tried to get things moving.

First of all we tried to find a gas engineer locally who installed fireplaces. It seems you need to pass an extra exam to get on the Gas Safe Register for fireplaces, and no-one would touch it. We wanted to ‘buy local’ so we went to a small shop in town, but when they eventually sent round their estimator it turned out he was from Essex. Not exactly local! We then had to chase and chase to get a quote out of them, by which time we gave up. That left just ONE firm in the area (Sussex Fireplaces) who sold and fitted gas fires. There were some negative comments about them online, with someone suggesting going to a firm in Arundel (50 miles away). In the interests of quote comparison, we asked both firms to quote. The local one charged £45 to come out (deducted off order if we go with them) and the Arundel one wanted £30. The quotes themselves were pretty much the same.

In the end we have gone with Sussex Fireplaces, and they’re going to install a similar (slightly larger) fire in the music room too. They weren’t prepared to do the preparatory pipework, however (both fires are quite a way from the gas supply). But, as luck would have it, the builder who’s recently done some work on the porch to our building was able to recommend a plumber/gas engineer, and he has been brilliant. So, so far so good.

Meanwhile, the builders who came and made good the living room fireplace revealed some pretty rubbish floorboards and a half burnt-out joist – presumably from before the days of building regs for fireplaces. Looking at the pics of the hearth from before I’m wondering why we asked the builders to remove the concrete, but I do remember why – because we were planning to sand the floor and the old concrete slab was bigger than the new hearth and would have protruded into the room. However, we’re now thinking of installing an engineered wood floor throughout the living room and the rear hall, possibly also the kitchen. Ho hum!

Even so, Nick has done a grand job of sourcing and fitting new floorboarding to make the hearth area level and ready for the the granite. We hope!