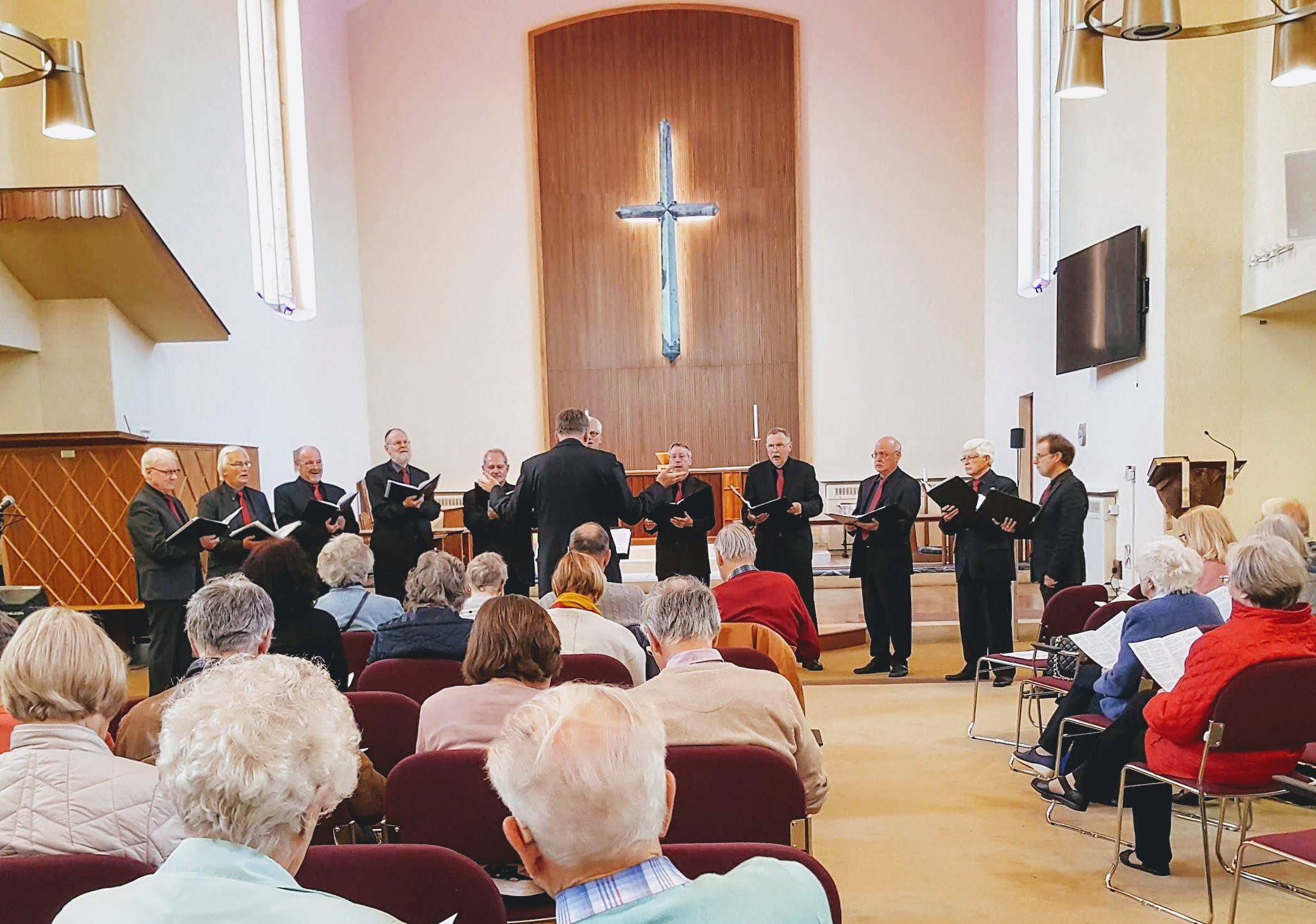 My friend Susan read about a concert at St John’s and asked if I’d like to go with her. It was a male voice choir visiting from Germany, ‘Die Alten Knaben’ (the old boys!) from Gross Flottbeck near Hamburg.

I think it’s always good to support these visiting choirs if possible, after all I’ve been abroad with enough choirs and know how gratifying it is to get an audience – who frankly have no idea what they’re letting themselves in for.

There were probably about 60 or 70 of us in the audience, which is pretty good – turns out the Old Boys had been to St John’s before, three years ago. In an extended introduction, one of the choir members came forward and told us how they always liked coming to England, and how at their last visit a lady had come up to them after their performance with tears in her eyes, begging them to return. Nothing like raising one’s expectations! I do hope that lady was there again this time. The spokesperson also rather touchingly said how he’d only discovered later that St John’s had been flattened by German bombs in the war, and he feared they wouldn’t get an audience! Eastbournians do have a long memory, but I think even the most patriotic types wouldn’t hold it against this amiable group of chaps.

This is where I would tell you more about what was sung, except the programme has already gone into the recycling – duh! The first half was sacred music with a secular second half. There were certainly some ambitious numbers which challenged the ensemble’s tuning and I felt the choir was more at home with familiar repertoire such as some of the German folk songs. Overall the sound made by just eleven singers was blended and very pleasing. The opening piece of the second half was a lovely song performed with great confidence and warmth.

I managed to snatch a recording of the last piece of the concert (apologies for sound quality, but it gives you an idea):

This was my first visit to St John’s since the refurbishing of the interior. Modern church interiors these days rarely seem to incorporate contemporary art, favouring function over all else, so I was worried the fine but unappreciated mid-20th century craftsmanship of St John’s would be lost in a sea of mediocrity. As I feared, the pews have all been ripped out and replaced with boring chairs and carpet. The ubiquitous huge TV screens now hang around the walls and a pile of technical clutter fills a space at the front. However, the lovely wood/glass screen between the nave and the side chapel is still there, as are the lectern and the lights. The curtained backdrop to the altar has been replaced with what looks like a wood panel and an interesting backlit cross, which actually I quite like. So not a complete disaster!