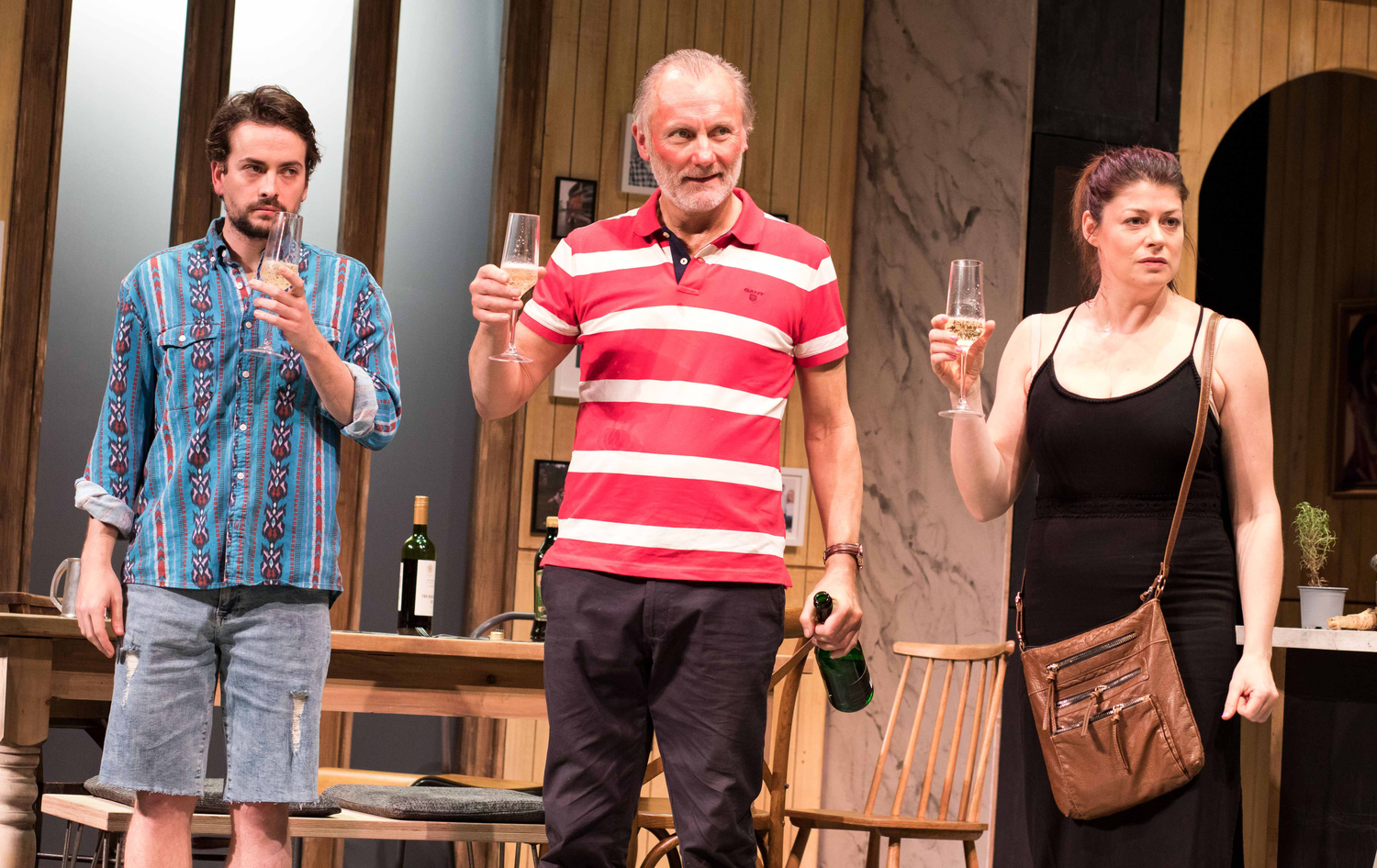 A decent turn-out last night for the opening of ‘Caroline’s Kitchen’ at the Devonshire Park Theatre. The basic premise: a TV chef is about to record her final show, while at the same time her seemingly perfect life is actually disintegrating around her.

All the tropes of a ‘seemingly perfect life’ are here: the successful, affluent middle-aged couple (she a TV star, he a retired banker addicted to golf), a personable, articulate son who’s just graduated from Cambridge with a first, the ‘help’ in the form of a hyper PR/personal assistant and an almost-resident carpenter, a beautiful kitchen. Even the weather plays a part – we’re told it’s a sweltering midsummer’s day, although by the end of the first half we hear the first claps of thunder and a warning of the storm to come.

After a slowish start the play came alive at the first appearance of Caroline’s larger-than-life husband Mike, played by Aden Gillett. His bullish account of the golfer who had upped and died on the 18th green (‘face down in the grass, arse in the air!’) went from euphoria to melancholy and back again. His rants on the misery of ageing punctured the rest of the play and were very funny (and struck a nerve with the Eastbourne audience I suspect!) Mike’s appearance was also interesting in that it changed the dynamic; we learnt more about his and Caroline’s relationship and if anything this sidelined the other characters’ stories.

Exploring complex themes in a light comedy is a dangerous game. At times I thought I was comfortably watching a sitcom, only to be wrong-footed by a clunky ‘tell not show’ moment, such as Amanda’s sudden speech about her tragic upbringing. For me, some of the humour was a little laboured and a tad dated (running jokes about vegans and casual racism for example). But there were many unexpectedly funny moments, such as a border-suicidal character suddenly announcing ‘I love your fridge-freezer!’ The ending is also suitably farcical. Caroline Langrishe as Caroline looks and sounds the part. I’d have liked her high-octane character to have started out calmer and in control, so that we saw more of a descent into chaos – nonetheless she convincingly conveys her increasing desperation as events progress.

For a comedy, this was a sad tale of troubled people, each character with their own secrets heading (mostly unwillingly) towards some sort of catharthis. Interviewed in the programme, playwright Torben Betts says he liked the idea of ‘gathering people together in one place, making it hard for them to leave and turning up the heat.’ Tensions were certainly ramped up and continued to build till the end, with the set virtually destroyed, and the audience clearly enjoying it.

Caroline’s Kitchen is on at the Devonshire Park Theatre until Saturday 16th March.