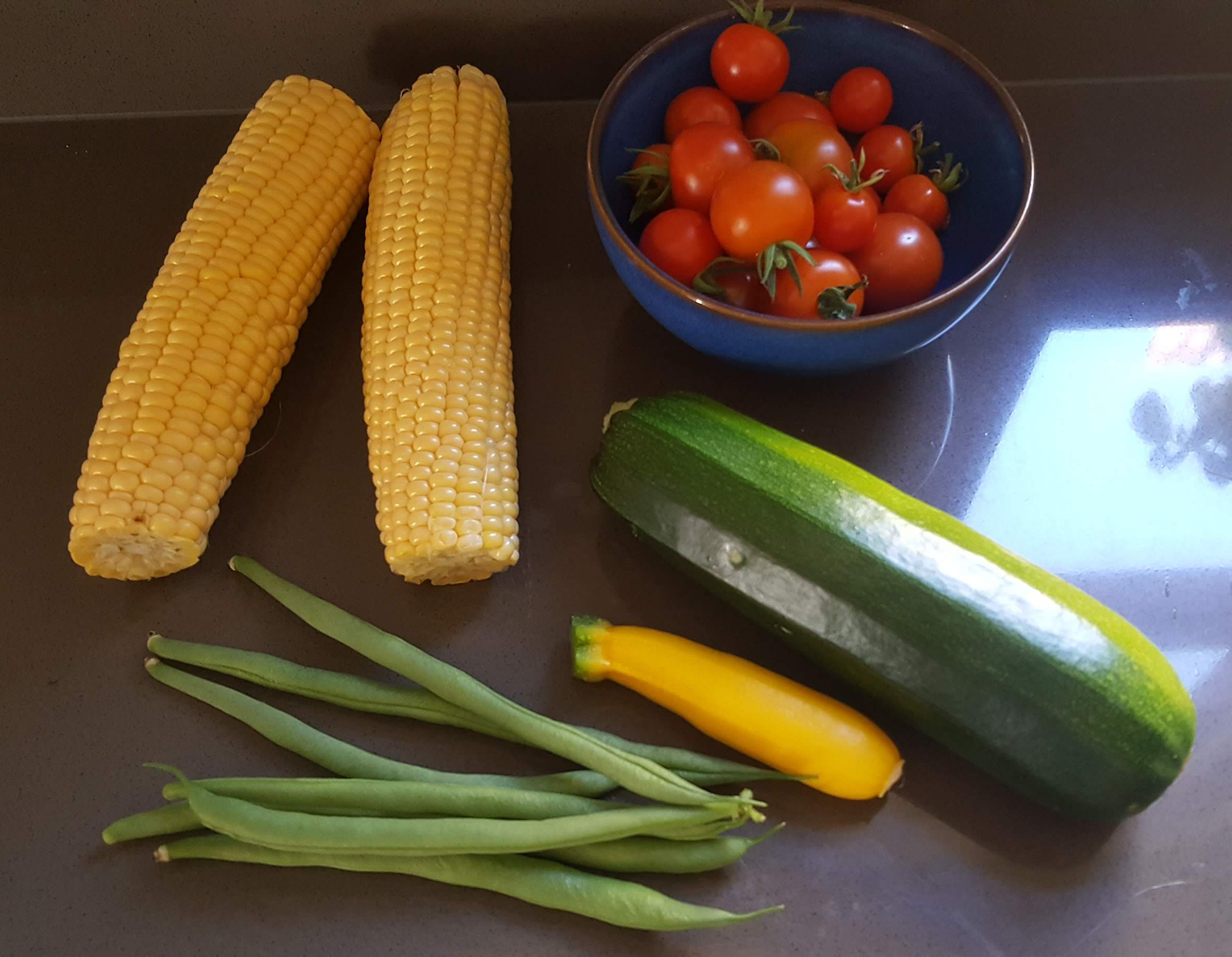 We’ve only just come out of a long period of drought which seemed to last the whole of June and July. As a result, many things in the garden suffered, although we tried to keep the veg watered. After all the efforts to bring plants on from seed it would have been so sad to lose them.

It’s been really interesting, the difference between this year and last. Whereas last year we had plentiful courgettes, beans, mangetout and spinach, the stars this year so far have been tomatoes and sweetcorn. I also found this year that seeds took ages to germinate, some not coming up at all. Last year it was easy to grow coriander in pots in the summer house, this year it’s been straggly, slow and a bit bitter. Last year I planted spinach and mangetout in the raised beds very successfully, this year I tried mangetout in several different locations and was rewarded with maybe 4 or 5 pods before the plants all went mildewy and shrivelled. Having had a dozen or more sugar snap seedlings come up strongly in the summer house, once planted out they were all eaten by slugs. Tried planting a LOT of lettuce and salad seeds but no matter how long I kept them indoors, when I planted them out 90% got eaten.

In the end I did manage to grow half a dozen lettuces which I harvested as ‘cut and come again’ and they provided salad for us for many weeks. The variety is called ‘Merveille de Quatre Saisons’. I protected them with wool pellets which did keep the slugs off for a while, but they started coming again. So I then put down a copper-treated mat, and this (so far) has been quite effective. Next year I will do that from the start! 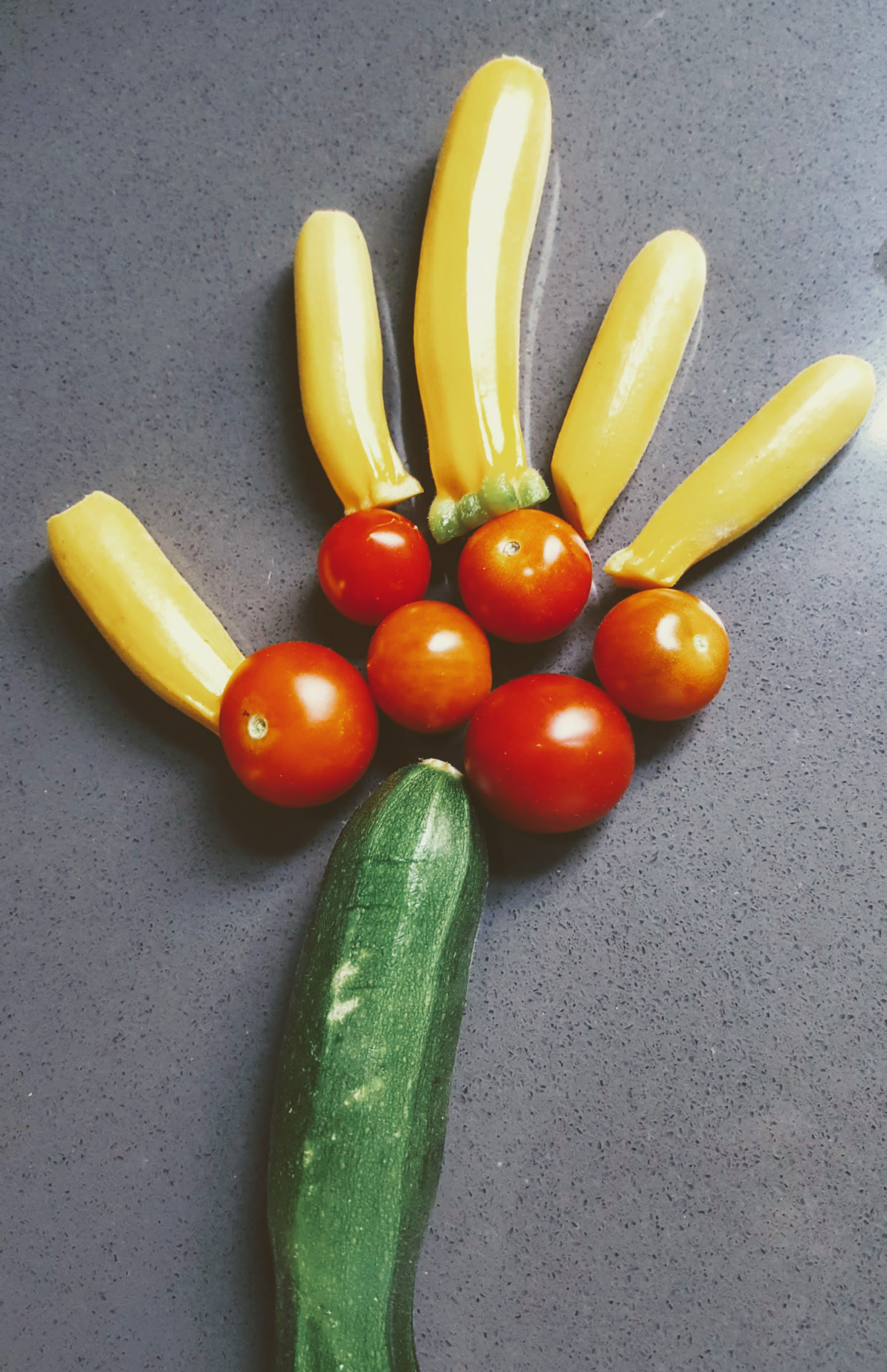 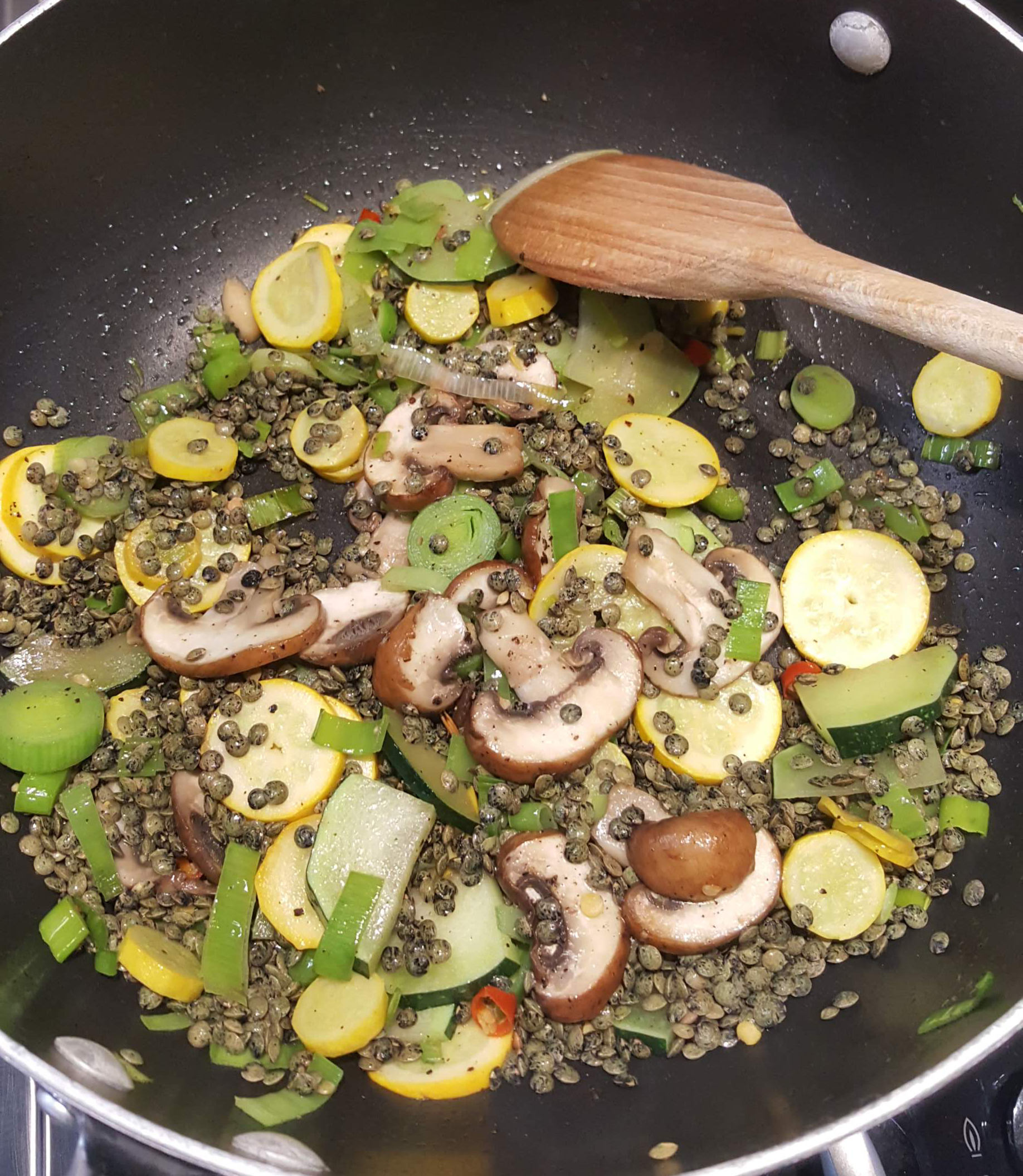 Now to the tomatoes. We have one plant (‘Tumbling Tom’) which we bought from the garden centre, and this was the first to flower and produce fruit. There are six others (‘Gardeners Delight’) that I’ve raised from seed, and they’re all now producing plenty of fruit, which is really exciting. The hot summer seems to have really worked for them. I have tried very hard to keep them fed and watered. 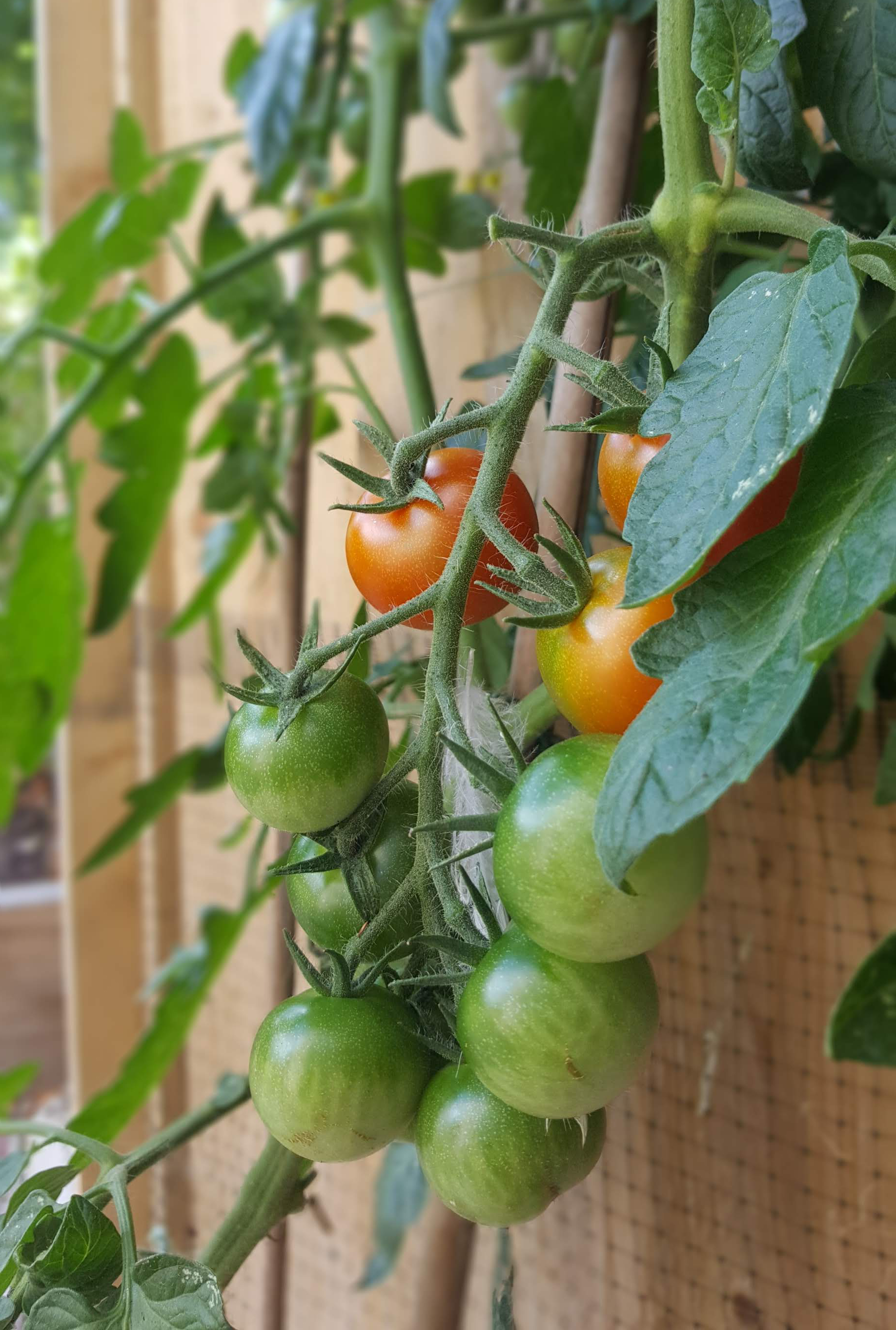 The other real excitement has been the sweetcorn. Each grown from a single kernel, our four plants have grown to about five feet tall, and although I was worried they would dominate they are rather marvellous to look at, very architectural. The leaves look like a Yucca plant, and the tassels on top are great fun. the cobs develop from the main stem, bulging out like a pregnancy, each cob topped with fine hairs called silks. Our four plants will potentially produce nine cobs – we’ve already eaten three and they were fantastic – really sweet and soft, almost melt in the mouth. 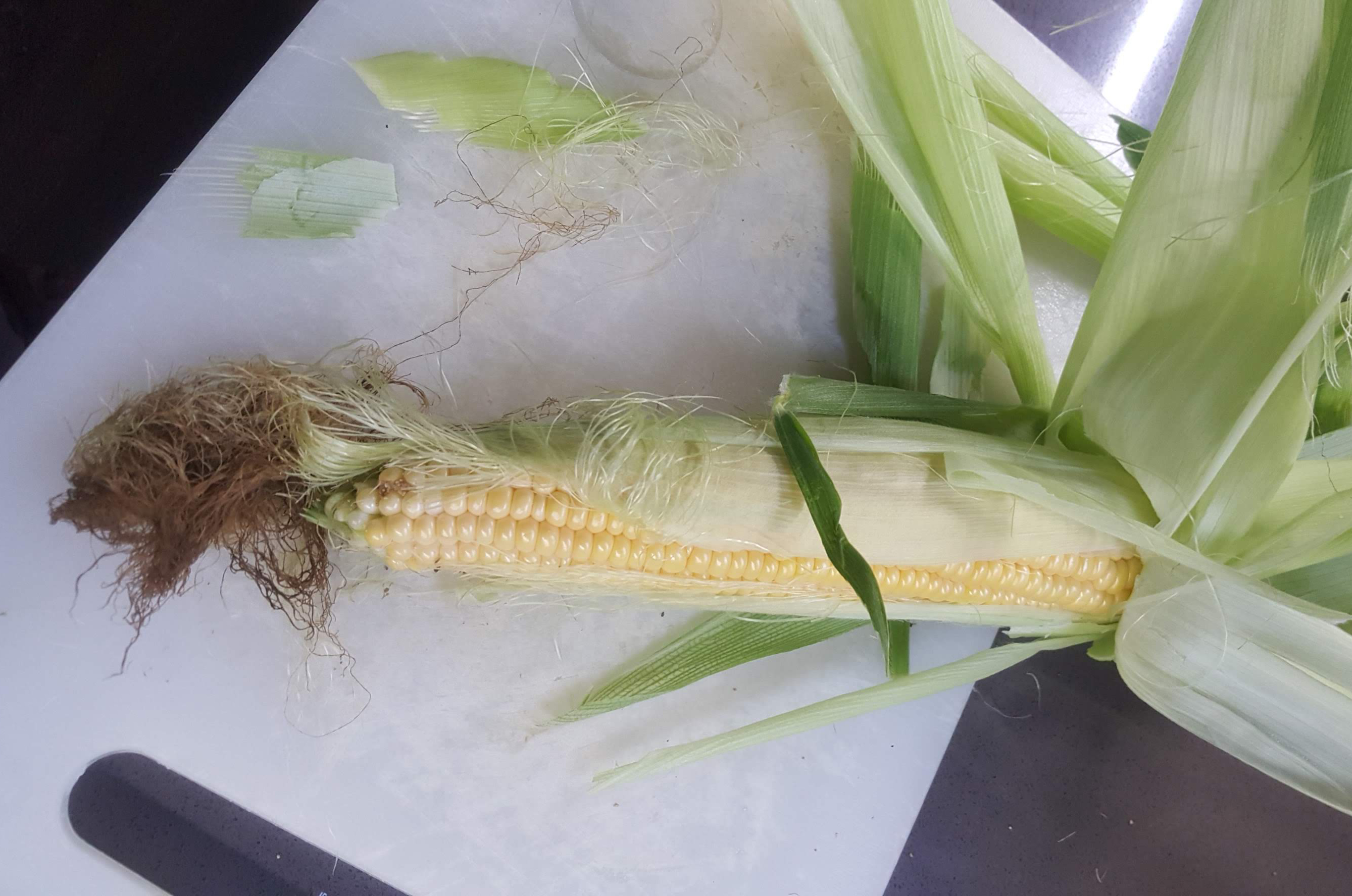 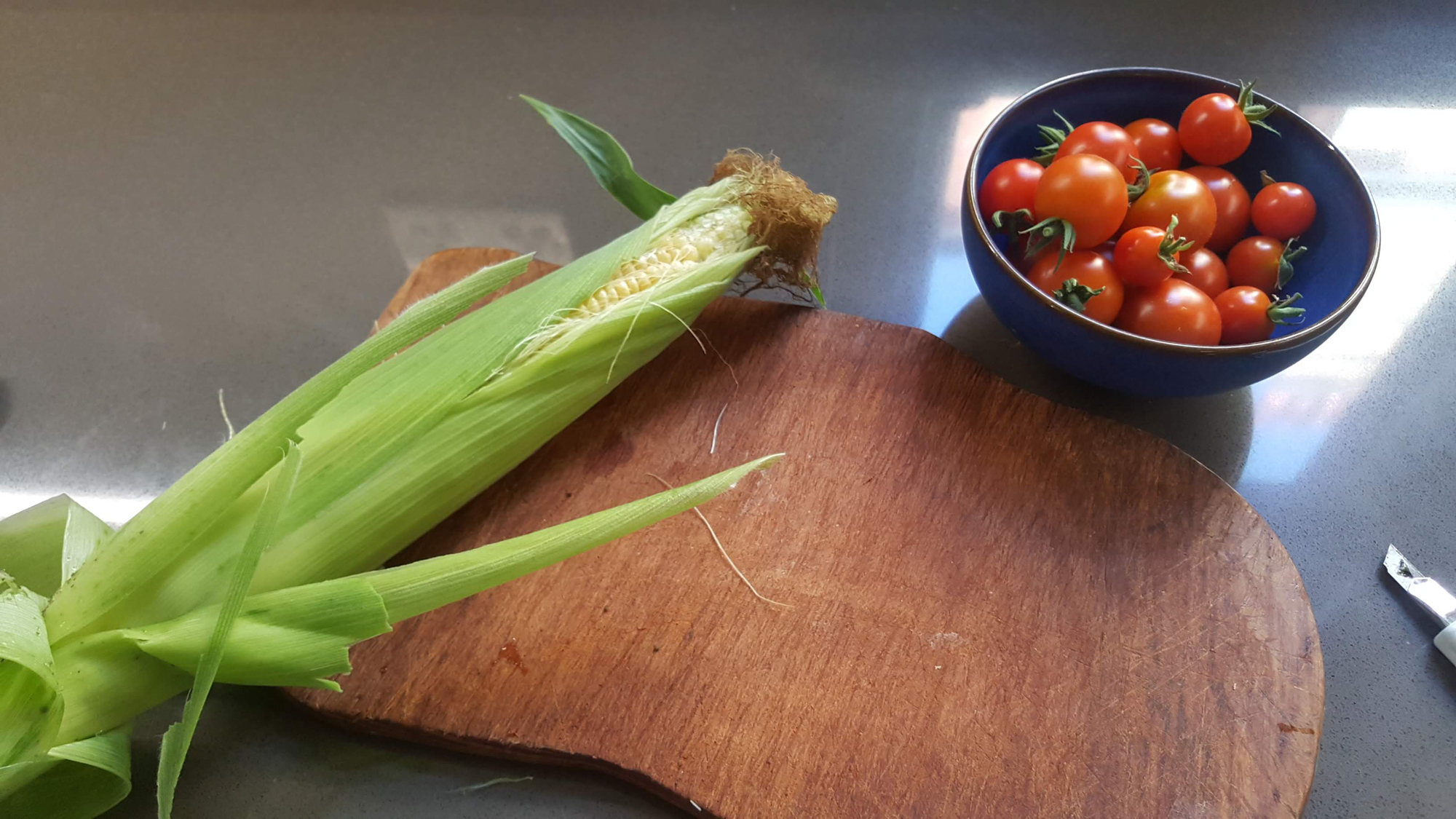 The rhubarb has also been good. The fruit is Nick’s department – he makes a fine crumble! 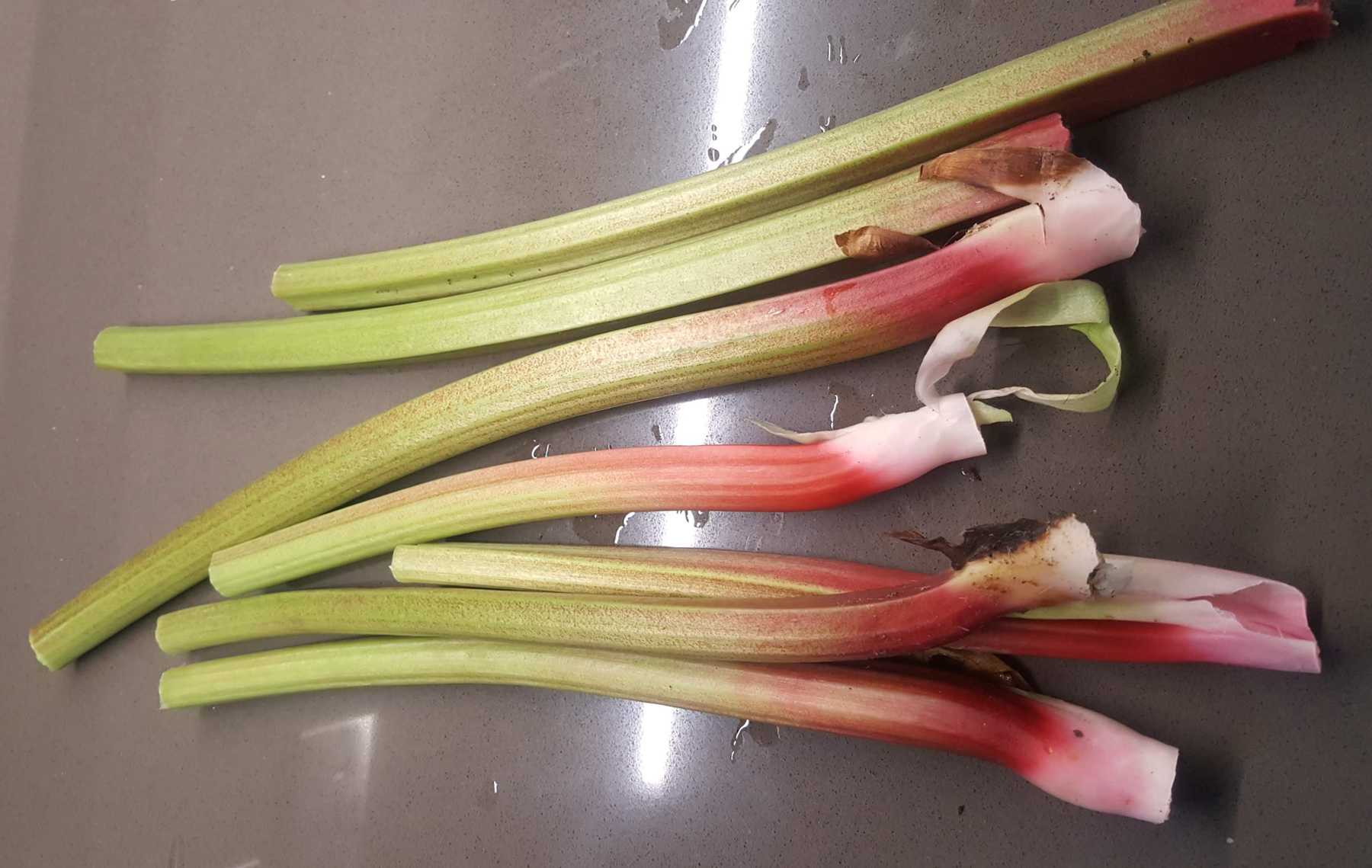 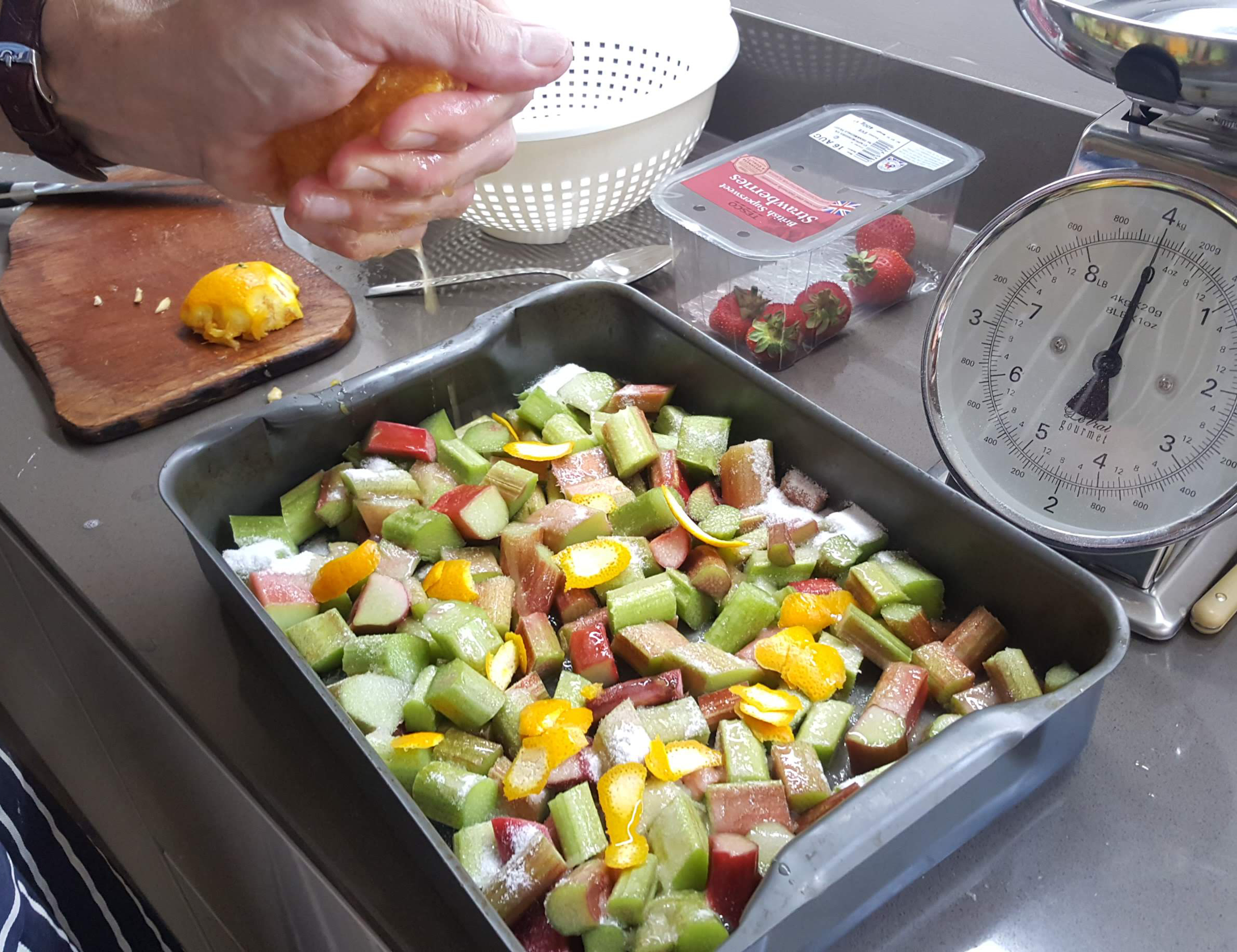 Although our strawberries have been a bit disappointing, there were 2kg of strawberries going cheap in the shop the other day, so we took advantage and made some jam! 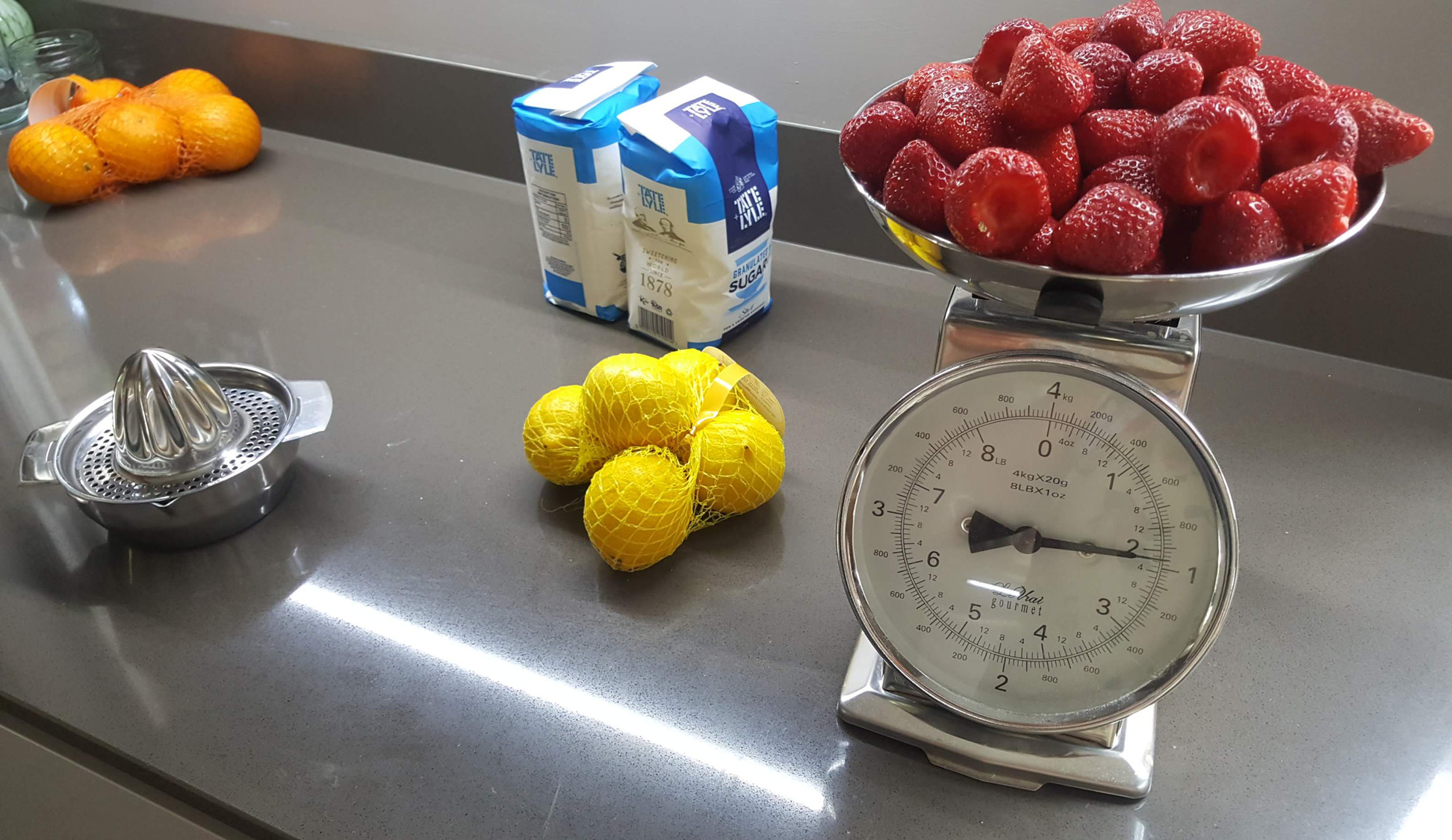 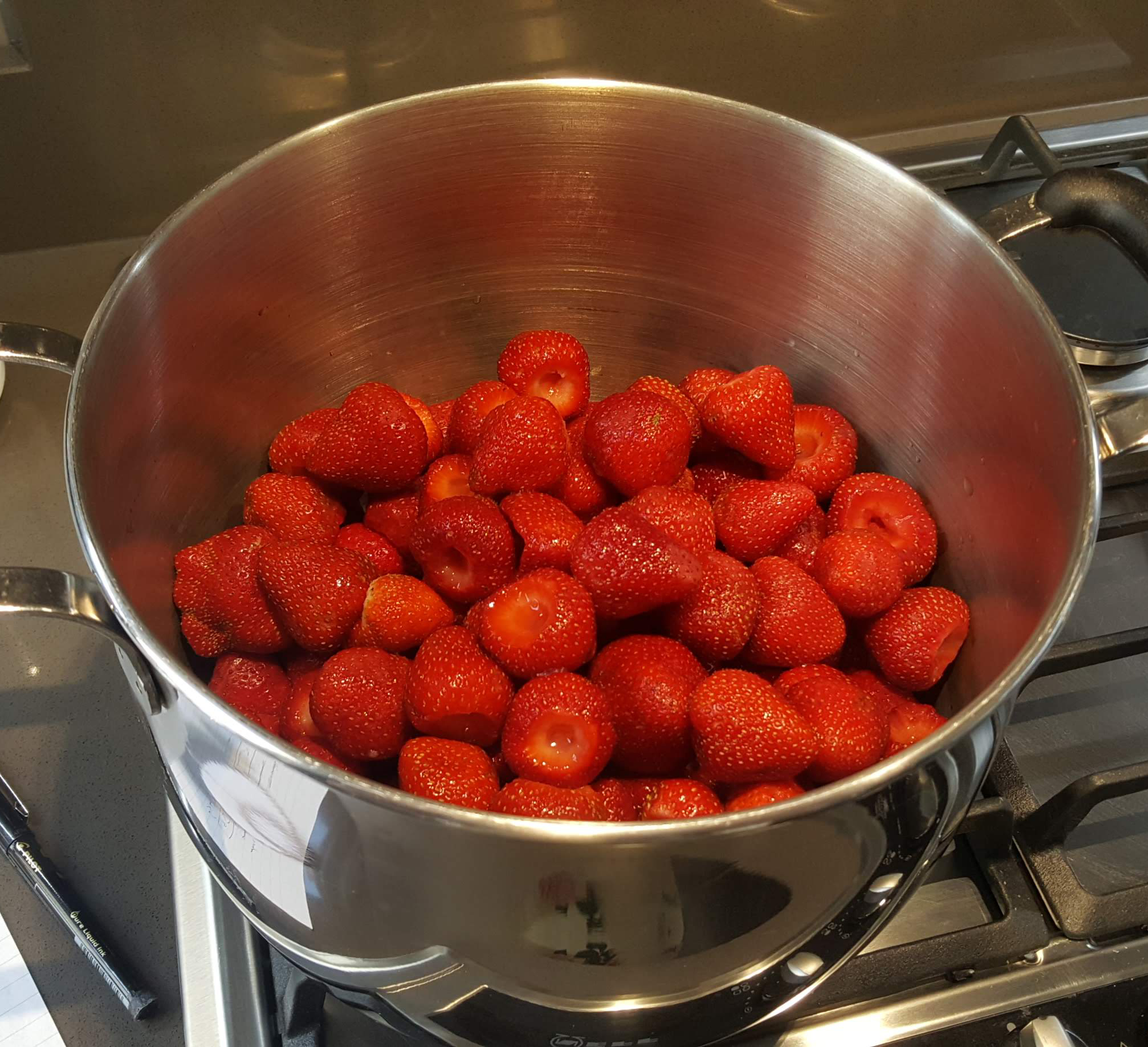 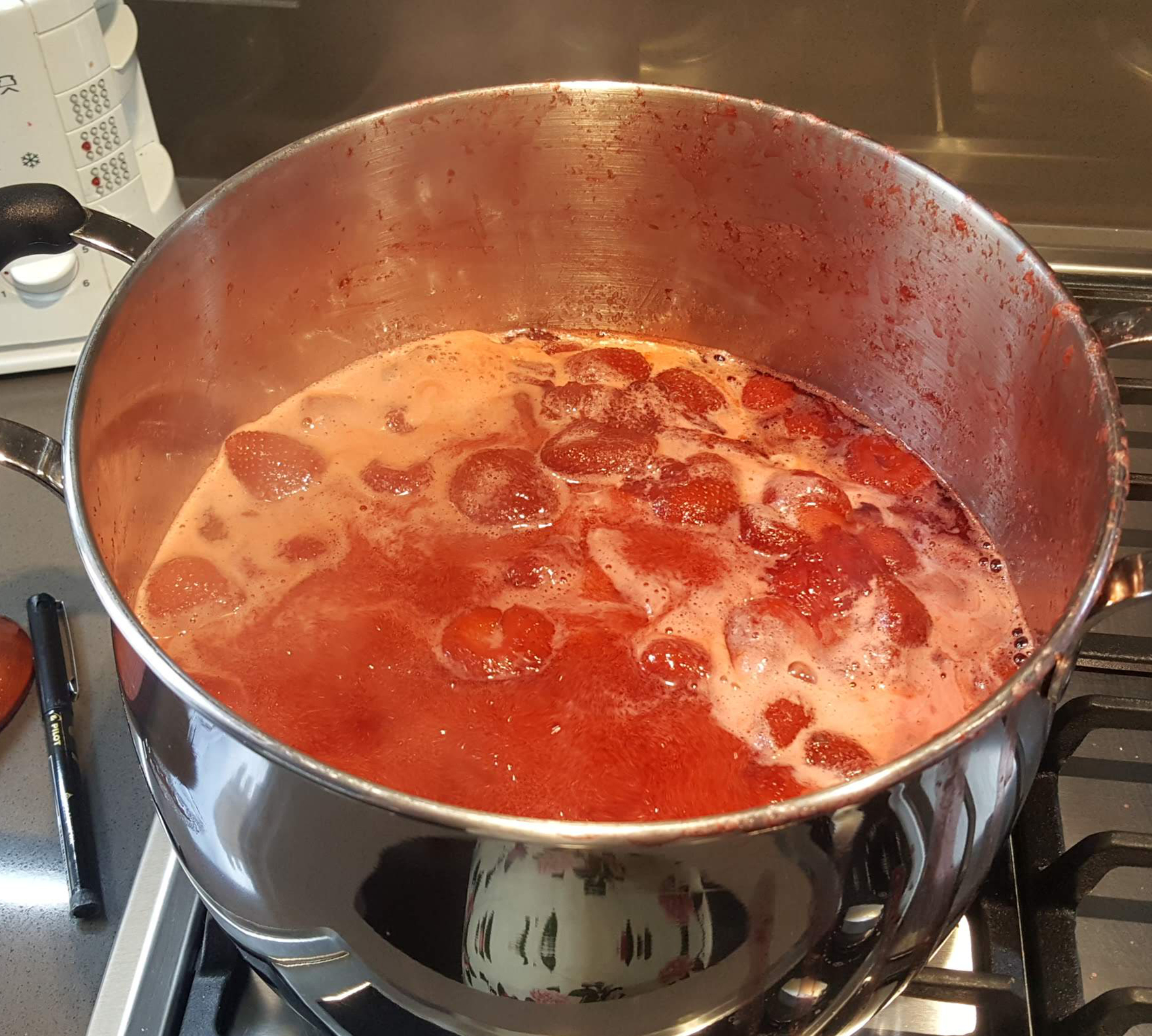 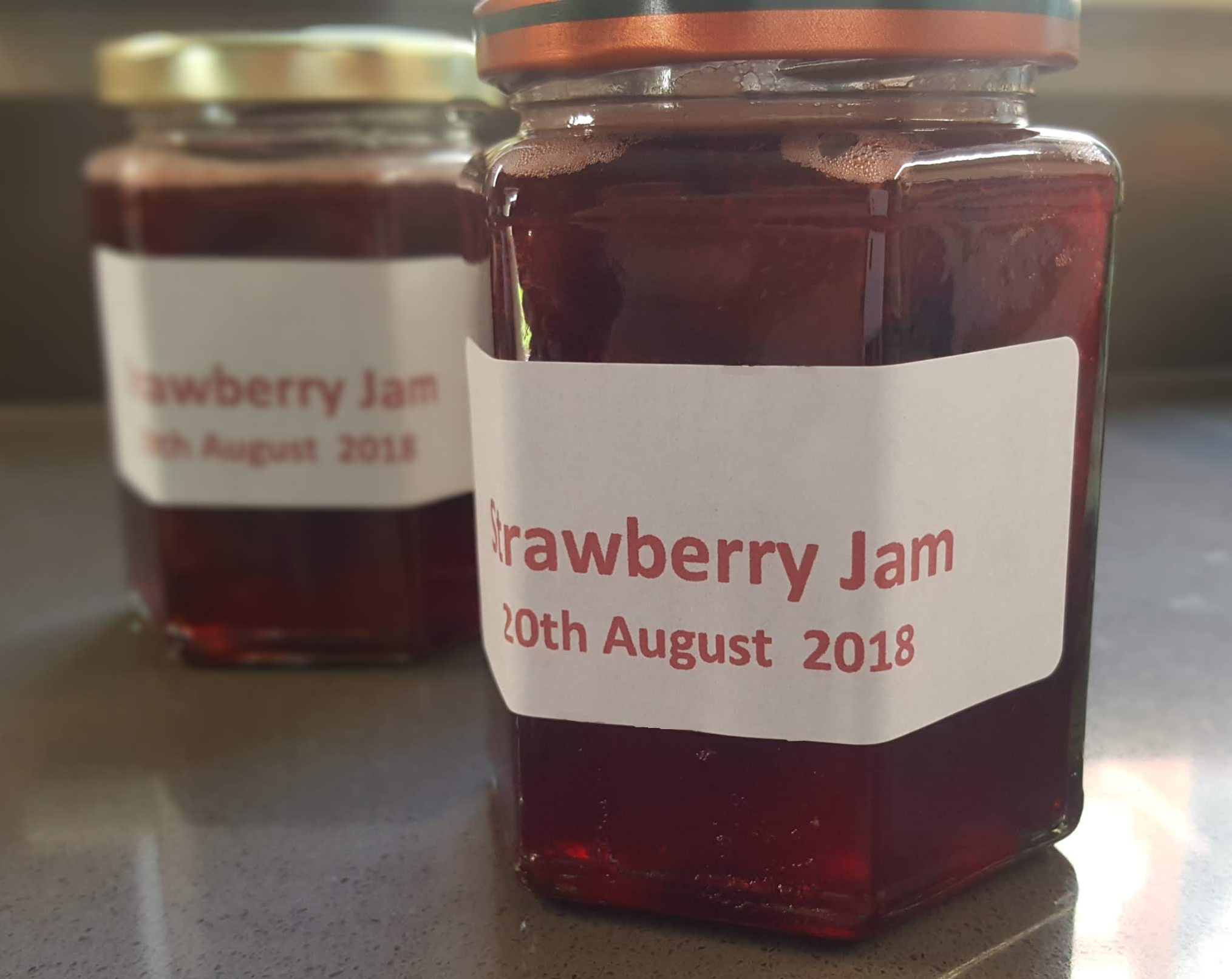