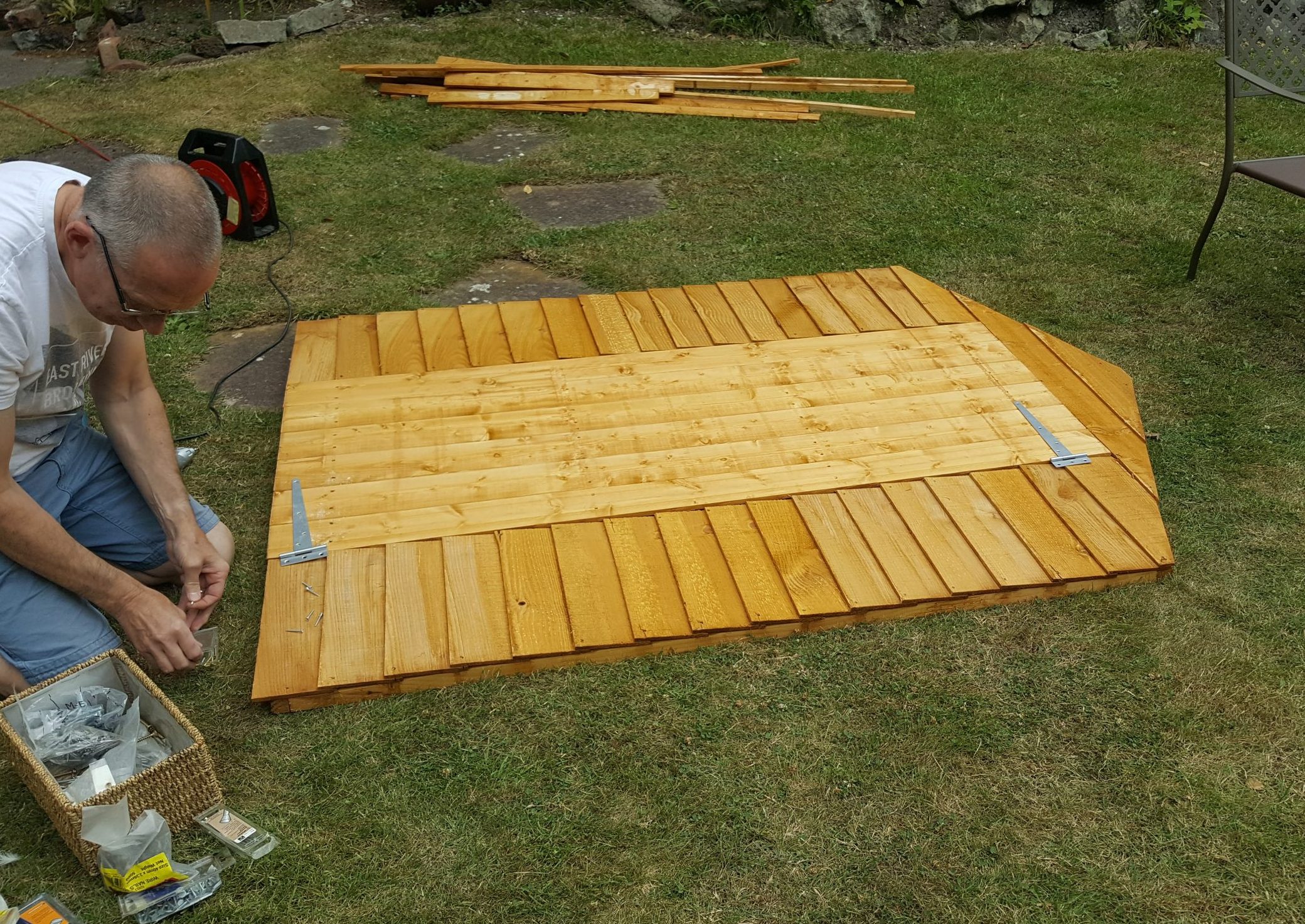 I wish I’d taken photos of the old shed, but basically it was falling apart (leaking roof, rotten floor, various layers of roofing felt peeling off, door wouldn’t stay shut, etc). So I persuaded Nick we should replace it, as our tentative plans for a new combined shed-summerhouse structure are on hold at the moment. After much research I suggested we buy a ‘value’ shed from Waltons, the same size of the one we were replacing. It seemed like a good price and it was delivered promptly, although I was immediately a bit worried that it was, well, flimsy!

It took us two days to dismantle the old shed and build the new one. Nick did most of the hefty work but I found it hard work too! But we had fun as well – such as the moment when I was struggling to take the old door off its hinges and Nick just said ‘step back’ and then kicked it down, as if he were Jack Regan in The Sweeney! 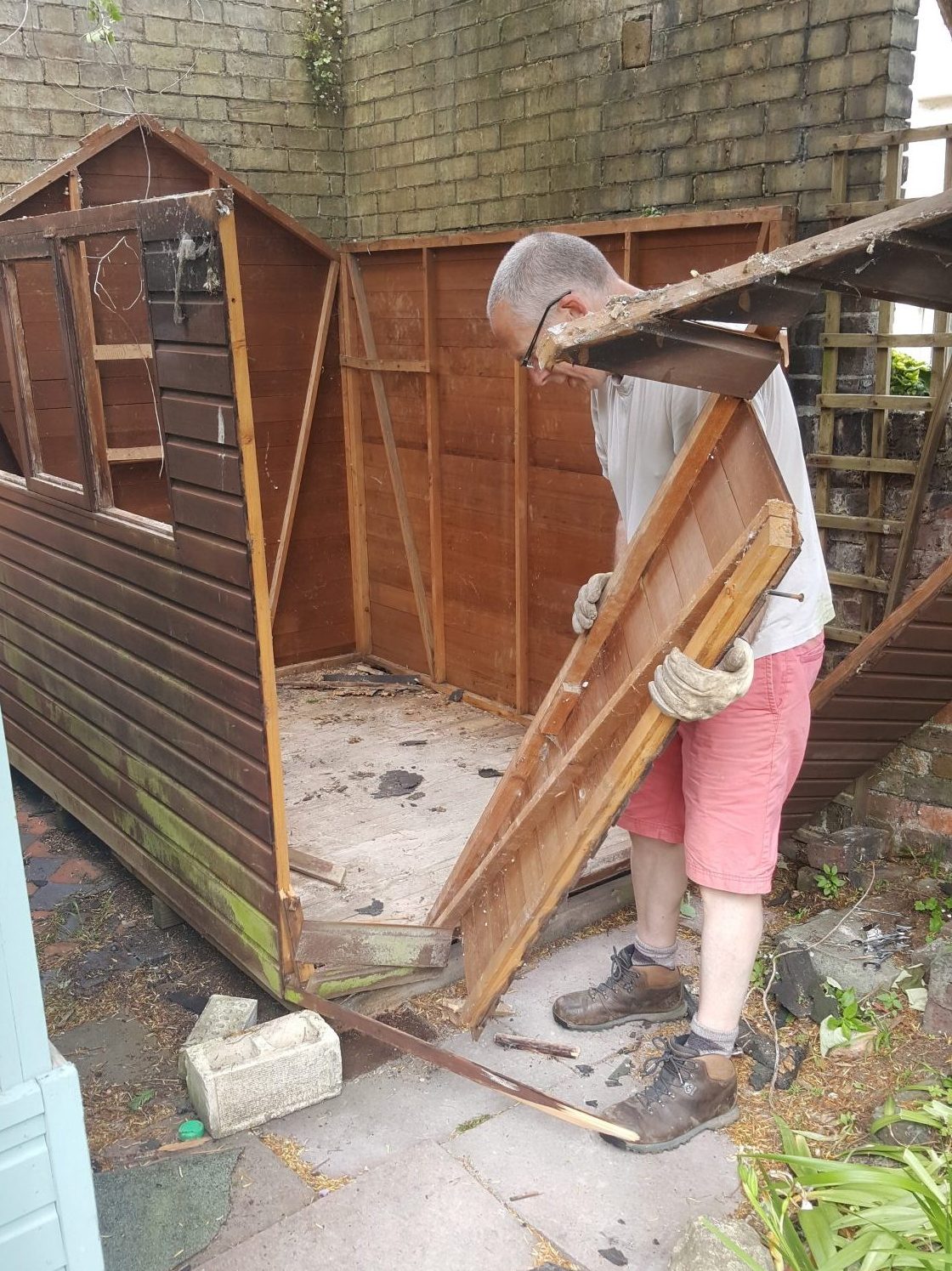 Everything from the shed had to be stored somewhere temporarily, so we found space in the summerhouse. But that was also full, so the lawn became a temporary storage space…

Once we’d torn down the old shed and stashed it temporarily, pending the nasty job of breaking it down, getting it all in the car and to the tip, we found we had a nice space, albeit covered in earth, riddled with ivy roots and with numerous broken and loose tiles. It scrubbed up though. We’re going to live with the crooked paving slabs for now. They are probably all lifting due to the yew tree roots below.

Before starting on the new shed we realised we needed some timber supports for the base so off we went to the timber yard. The first steps of the build seemed easy enough – getting the four walls up. The lawn was now the workshop space. 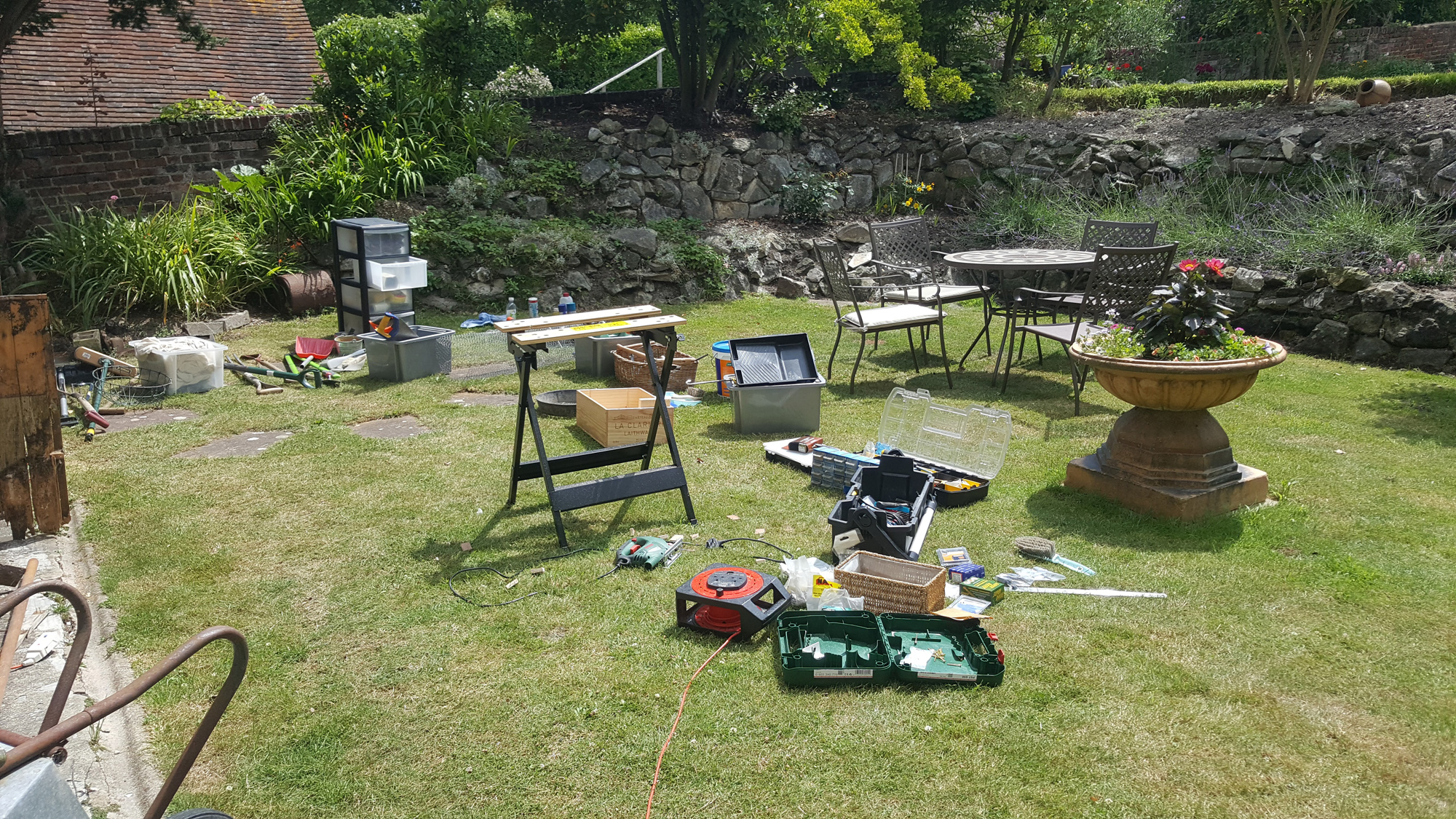 Getting the main structure finished was a fantastic feeling, but we then started to think about the interior storage. Luckily we had some bits of plywood the right sizes to make shelves, which Nick is pretty good at. 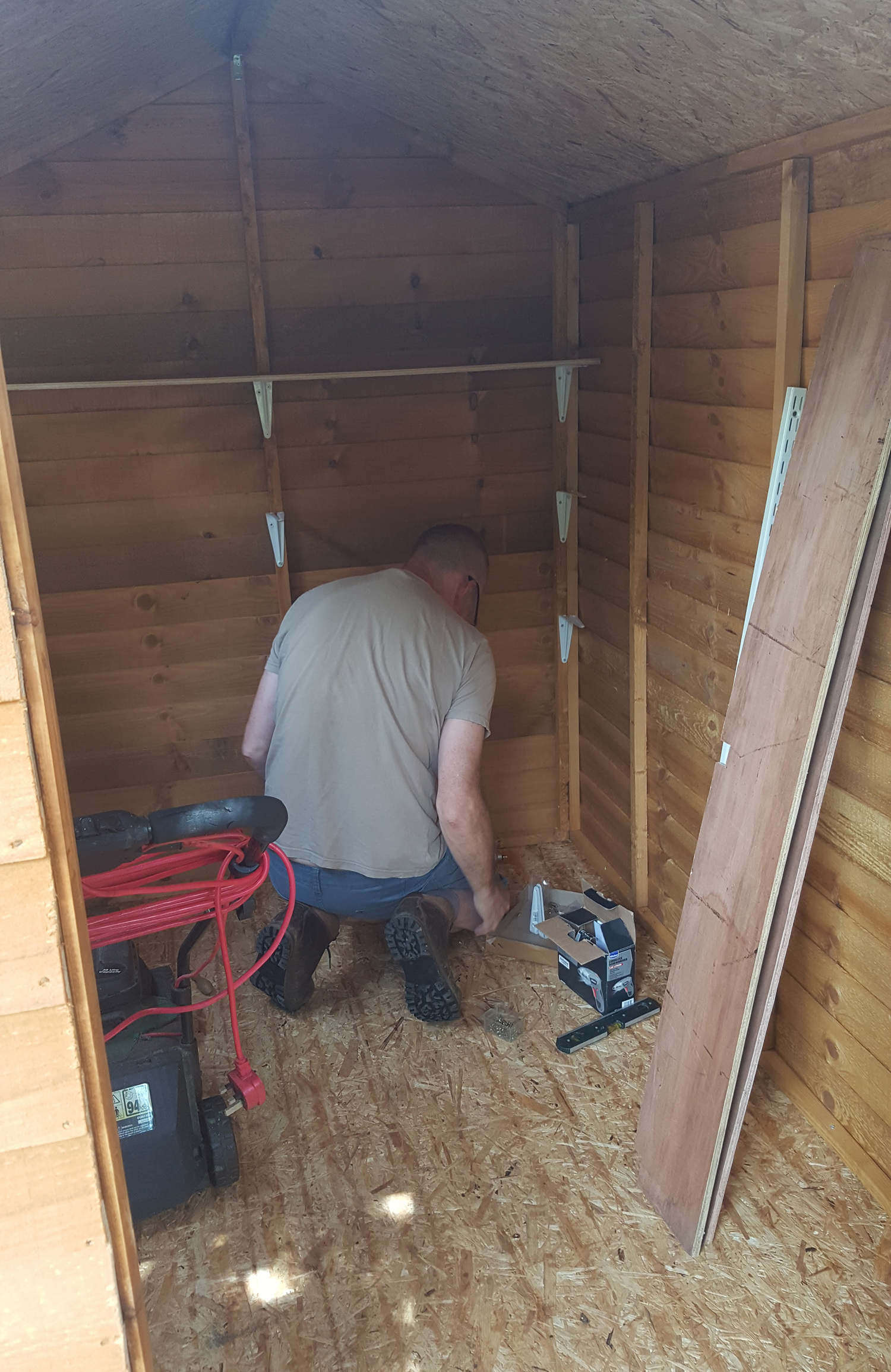 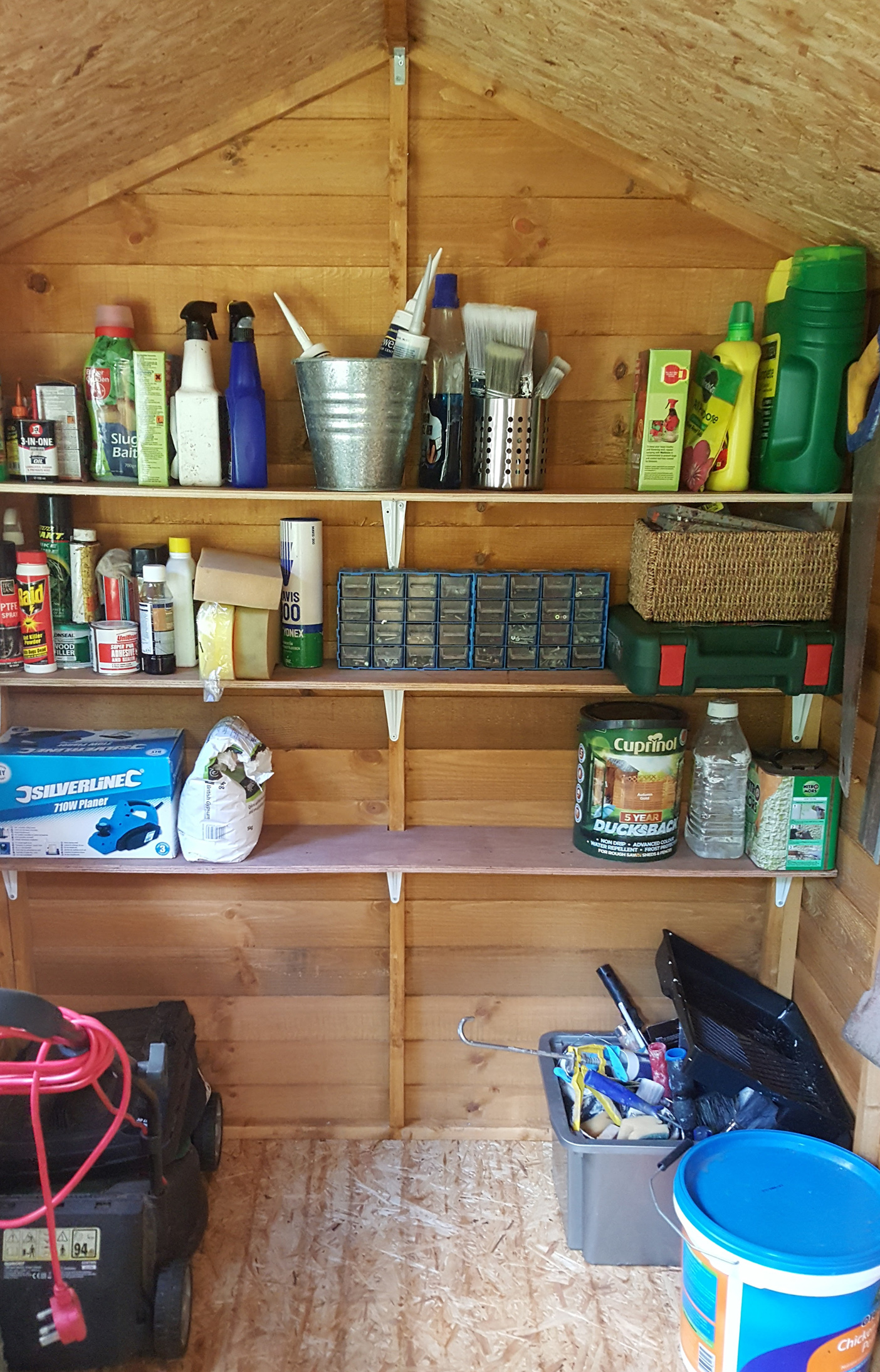 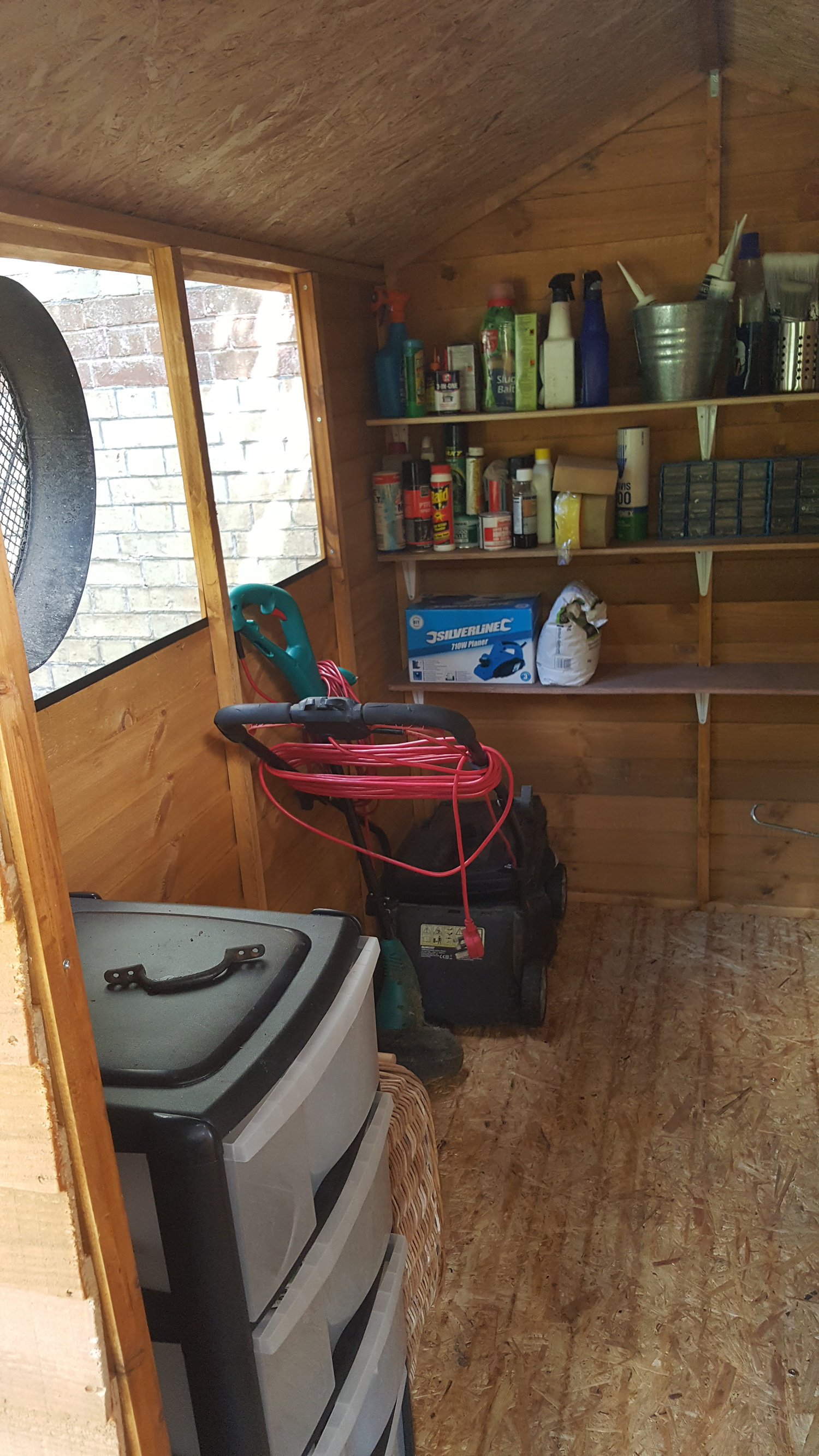 An orderly shed at last! Now we have to keep it tidy…