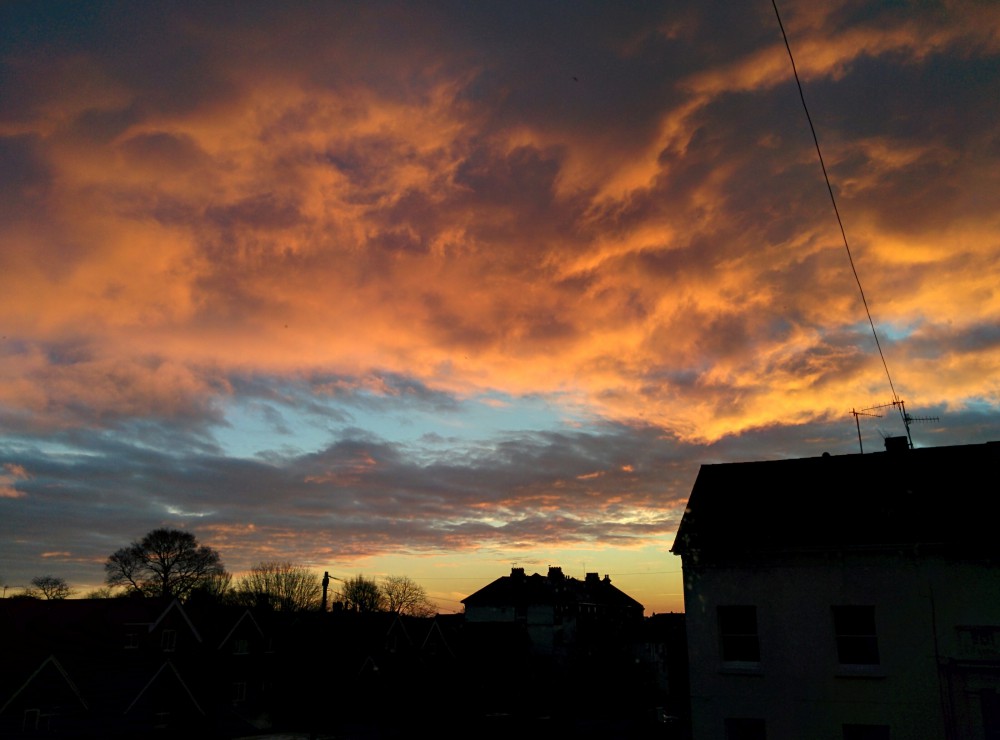 We finally moved to Eastbourne, last September, but to a rented flat. For reasons too boring and complicated to go into, we’re now on our third attempted purchase. Close to exchange of contracts? Who knows! It seems that management companies for freeholders (and their lawyers) are in no hurry to respond to our solicitor’s questions. Eight weeks to acknowledge a question has been received, another 8 to actually answer – seems to be the standard.

So in the meantime we’re sitting tight, getting to know the town, trying not to make too many plans (that’s hard!) and stay patient. We sold our Lewes house in September, sadly (for our neighbours)  to an absentee owner. The poster for our September concert is still up in the window! We miss our neighbour’s cats, a lot. In fact our second attempted purchase fell through partly because we found out we wouldn’t be allowed to have a cat.

Eastbourne has a LOT of sky and we get wonderful views of it from the big windows in this flat. Check out the January sunrise I snapped from bed! And we’ve already enjoyed some lovely walks along the seafront to Sovereign Harbour and in the other direction up to Beachy Head. We’ve been to concerts and are getting to know the marvellous Towner Gallery. I’ve joined a local choir and am getting to know people. It feels like a proper town, with all its different sides, including the slightly seedy, but I like that. ‘Unpretentious’ as someone remarked to me. With lots of potential!

The flat we’re renting is very nice (compared to most we viewed),  and although we have a spare room full of boxes there’s a lot of space (we’ve actually fulfilled my dream of having a sofa in the bedroom!). The only downside is that there’s sometimes a bit of noise (late night music etc) from a neighbour.

Nevertheless, it’s noticeably quiet here. I very quickly found I was able to sleep through the night, whereas at our Lewes home we were disturbed most nights by drunks in the street, and during the day by traffic. N loves his commute to work and we’re both appreciating being near the station. I’ve discovered the number 12 bus that takes the scenic coastal road to Brighton – a bit longer than by train, but the views are great (and it’s cheaper!)

I’m looking forward to reviving this blog properly once we’re IN to the new flat, and am getting a lot of inspiration from other blogs… let’s see what happens.