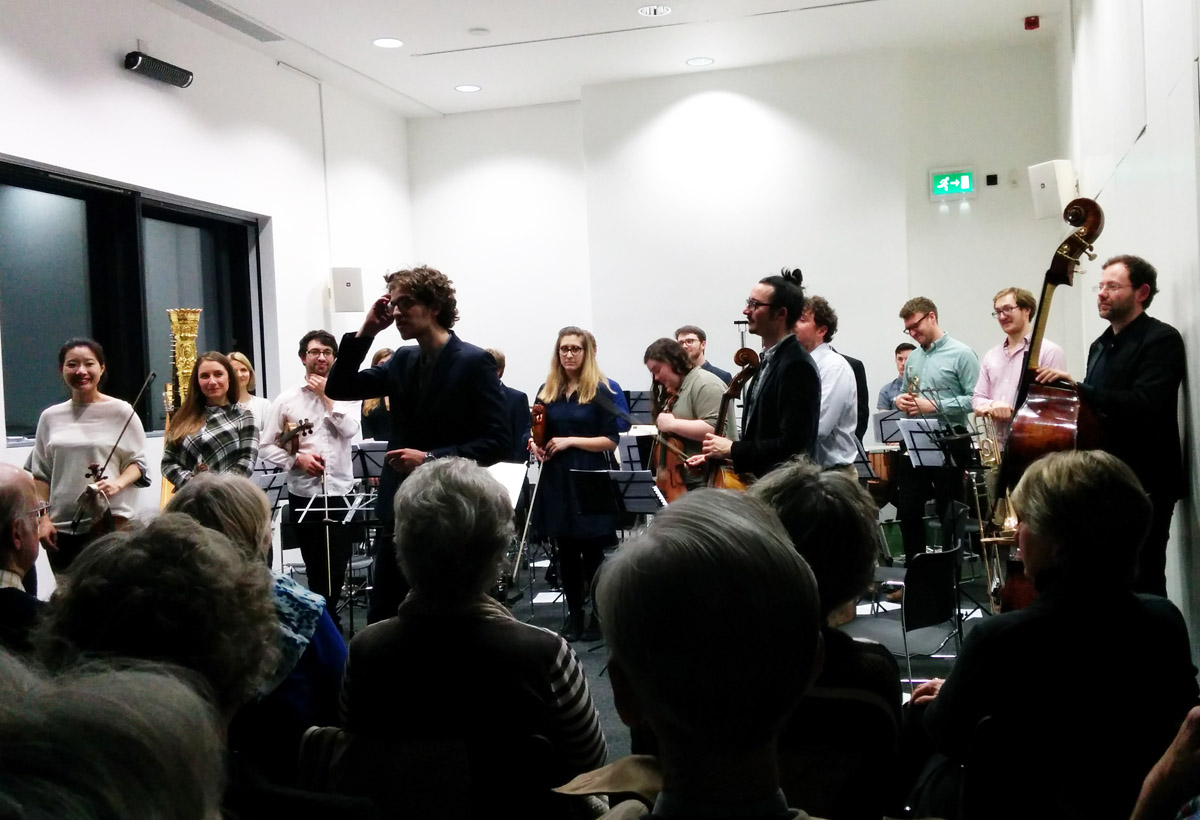 Do you go to classical music concerts? If not, why not? Just hold on to that thought for the moment…

On Saturday we went to the Towner Gallery (or ‘Towner’ as I think the brand strategists would prefer) for the first concert there by the Arensky Chamber Orchestra, young outfit from London who are hoping to set up a South Coast residency and are putting on a trial tour which also takes in the Jerwood in Hastings and the De la Warr Pavilion in Bexhill.

‘Sea Fever’ was billed as something extraordinary and very different from traditional classical concerts. On the bill: Debussy’s La Mer and Britten’s Sea Interludes from Peter Grimes. So far, so good. Fantastic music, in fact, and a lovely fit with Eastbourne, having the sea and also being the place where La Mer was written.

Now we like a good concert, so it seems we’re not the audience they are hoping to engage, if the website is anything to go by (“THIS IS CLASSICAL MUSIC. BUT NOT AS YOU KNOW IT.”) Apparently the reason people don’t go to classical concerts is because they are put off by things like performers wearing bow ties. So, er, nothing to do with the people just not being into the music? Again, from the website home page: EXPECTING CRAMPED AUDITORIUMS AND A SILENT TROUPE OF MUSICIANS IN BOW TIES? FORMAL PROGRAMMES AND A DRY (IN EVERY SENSE…) EVENING SITTING IN SILENCE? (Not my caps by the way, sorry for shouting!) A good number of the concerts I go to are in churches, and I know the seating there is often a tad cold and hard, although rarely cramped (chance would be a fine thing!). And I’m not sure how you can in silence when there’s music playing. But hey!

The music we heard on Saturday was wonderful: professional players presenting Britten and Debussy, what’s not to like? I can see that a small orchestra in a small space can create a similar effect to a full symphony orchestra in a large auditorium. There’s a particular intimacy about being reasonably close to the players. (Although it’s not unheard of  – for example when you have a ticket to sit in the choir at the Festival or the Royal Albert Halls.) But the word ‘auditorium’ is a clue. You have to be able to hear (and focus on) the music, and if you’re in a cafe as we were at the Towner, you also hear all the associated noises – fridges humming, food packaging rustling, staff talking (albeit trying to do it sotto voce). I did wonder if the nearby Burley Centre would have been more suitable. It’s a small venue, but a dedicated performance space with good seating, lighting, noise insulation and almost ‘in the round’.

The point about players not wearing bow ties or all in black is an interesting one. What is it about it that makes it a barrier to enjoyment? Funny how a football team all wearing the same colours doesn’t get criticised in the same way. Everyone wearing the same thing does emphasise the team aspect of an orchestra. It’s not a bunch of soloists. For me, having everyone dressed more or less the same creates a blank visual canvas and no distractions to the music taking you over. Experimentation is good. But there are many other things to try before getting players to perform in the clothes they go shopping in. At many concerts these days the players and choir may well be in black, but not a bow-tie to be seen, and certainly not tails.

We were led to expect something groundbreaking or unusual in terms of presentation – the website mentions cabaret-style seating and members of the orchestra coming forward to talk informally about sections of the music, neither of which happened. The charismatic music director Will Kunhardt spoke very well, and with true passion, when he introduced the music. I also liked the way that different movements from each piece were woven in between each other, and several bespoke compositions by the lead cellist were interspersed. This was very effective. But not innovative. Offering a themed cocktail was certainly unusual for a classical concert.

There must have been good funding because at £10 a head, with an audience of around 50, there’s no way this concert could have happened without it. And this raises issues for the arts generally. Competing for people’s interest and attendance at events is extremely hard. Classical music is expensive to stage – even if you only pay a violinist a rock-bottom £50 for a day’s work the labour costs add up, never mind venue hire, publicity and rehearsal costs. If you don’t have a sustainable model then how does that work in today’s economic climate?

There was a real energy about the evening and Nick and I enjoyed the experience – we’d certainly go again. And we’re always excited to hear of new cultural initiatives in our new home town – we want to support such things and see new grassroots ideas flourish. It also gave us plenty of food for thought – are there more interesting ways of presenting our Lewes Singers programmes? Are we missing any tricks for engaging new audiences?

Unfortunately, out-of-control hype always gets my hackles up – the Arensky website, the promotional material, the language – it’s entirely lacking in any charm or humility and as such doesn’t do them justice. My marketing brain can’t help but but critique this approach. If you go down the route of claiming you are THE GREATEST and that other approaches are RUBBISH then you’d better OVER-deliver or face the consequences. The first thing I learnt at Nike was to never slag off the competition – there’s no need, it’s not classy and it looks like you’re worried. I’ve also learnt that when you’ve got something brilliant, That Brilliant Thing does the talking for you. And finally: manage expectations if you want happy customers.

If you get the chance, do go to one of the Arensky’s events. I suspect this one wasn’t typical in terms of the organisation – it was a first night, in a new venue, and there are always teething issues. The fact that they are trying to break with tradition and reach out to new audiences is entirely laudable and worth supporting. You may even love the marketing and think I’m being ungenerous. But then again, if I didn’t care about it I wouldn’t spend an hour writing a blog post like this!

PS I love the Towner and it’s FREE to visit, which is even more amazing.