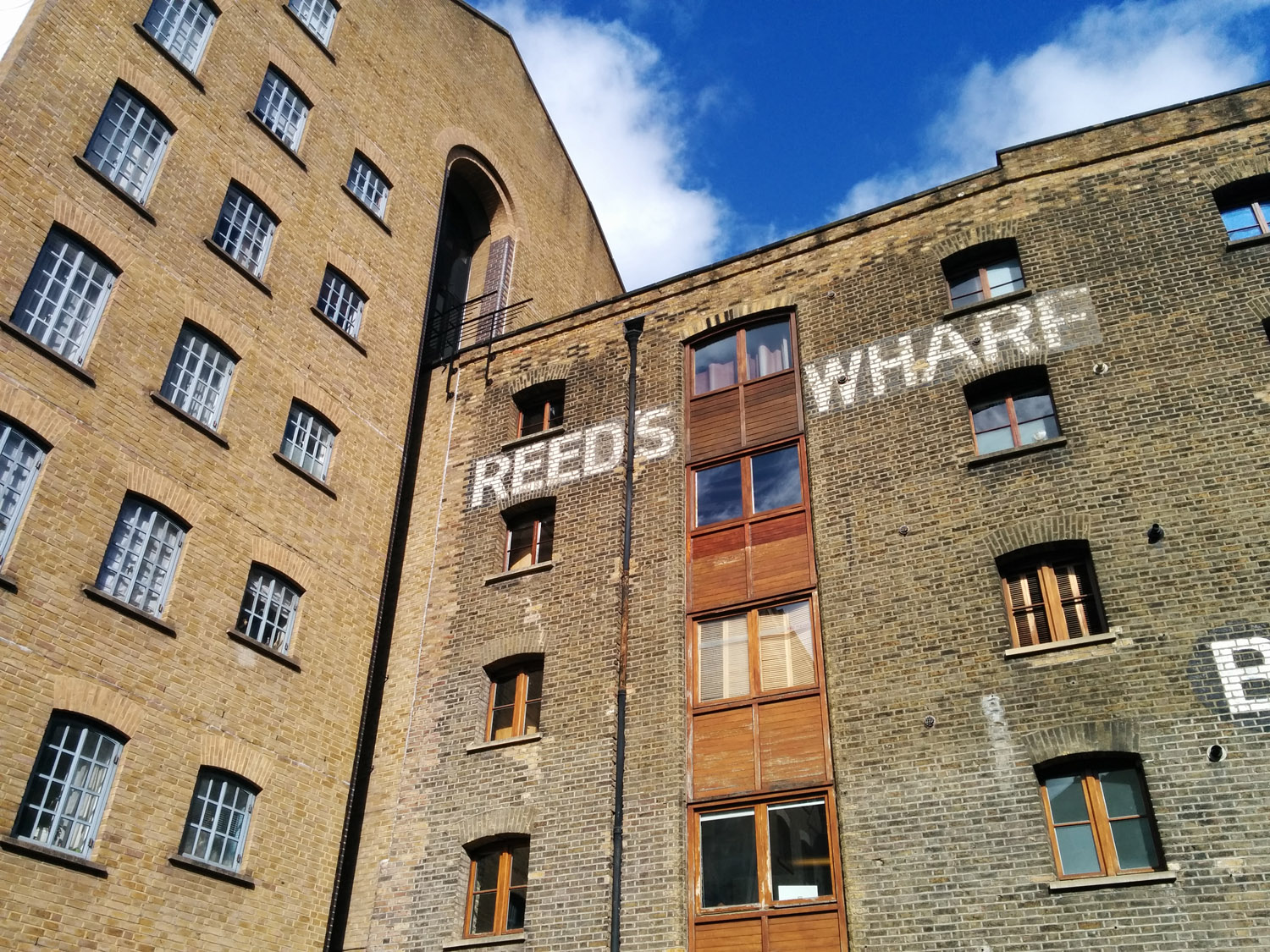 Nothing to do with Eastbourne, I know, but I thought I’d share one of our recent days out. London is only an hour and half away (when the trains are running!) and I’m a Londoner by birth, but there’s so much of it it’s impossible to every know it all. Last year we took one of Paul Talling’s London Lost Rivers walks along the route of the Fleet and enjoyed it so much that last week we were back for more.

These are guided walks unlike any others. The groups are small – around ten max, and many people are regulars. You have to book online months in advance, and when new walks are announced most of them are full within a day of the email going out! Paul is an absolute mine of information, not just about the history of the places on the walk, but everything else too – from where it was exactly that Turner painted ‘The Fighting Temeraire’ to which of the local pubs had to shut in the eighties because of a ‘bit of trouble’. It’s a real mix of Paul’s own lived experience and his meticulous research. The tours feel really informal and personal – unscripted and relaxed, and always ending at a ‘real boozer’.

We were so lucky on Thursday that the weather was so good – bright and chilly, but no rain. We started along the side of the Thames, where The Angel pub now stands alone amidst lovely a lovely park, but it used to be part of a maze of streets. 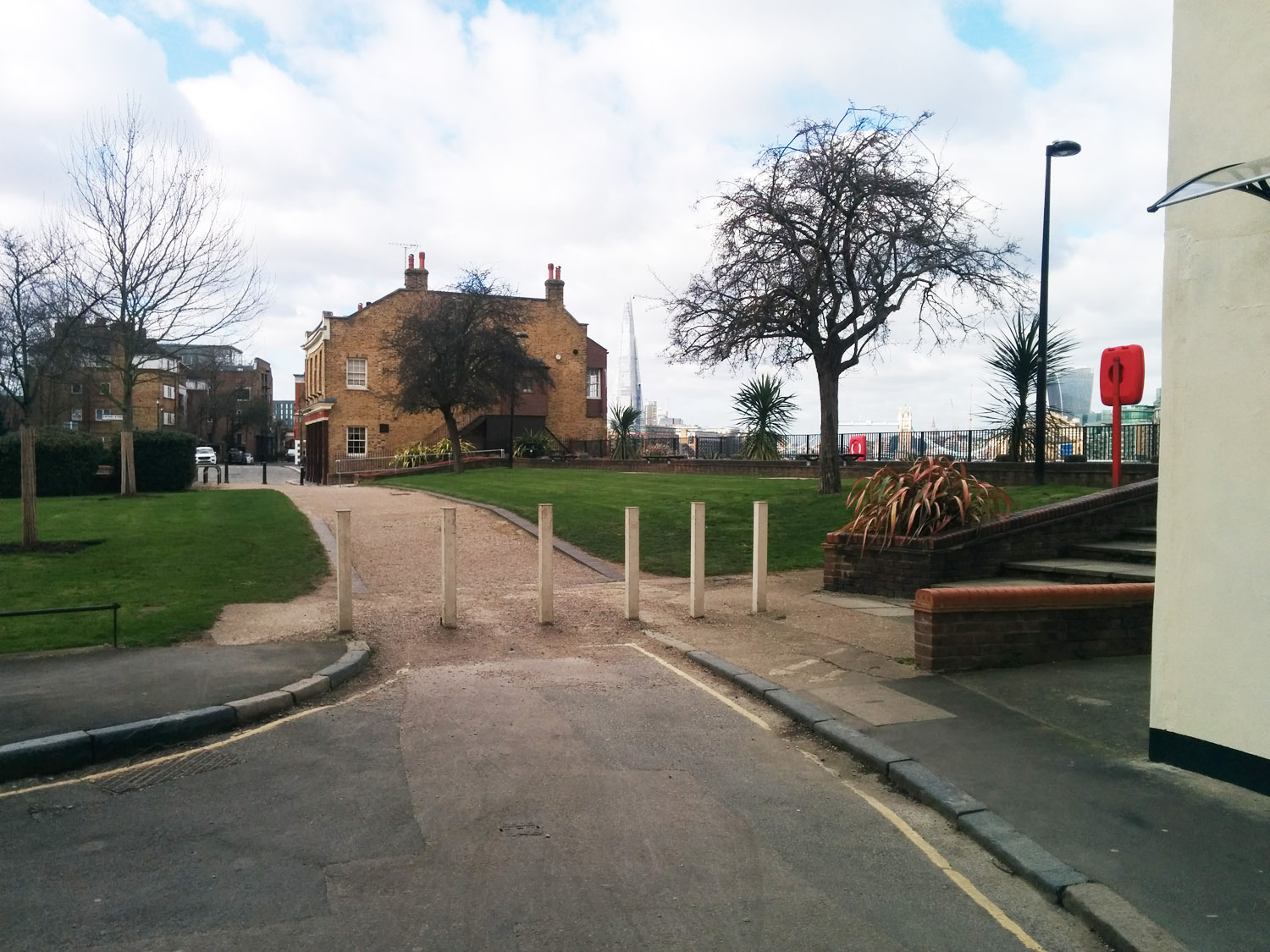 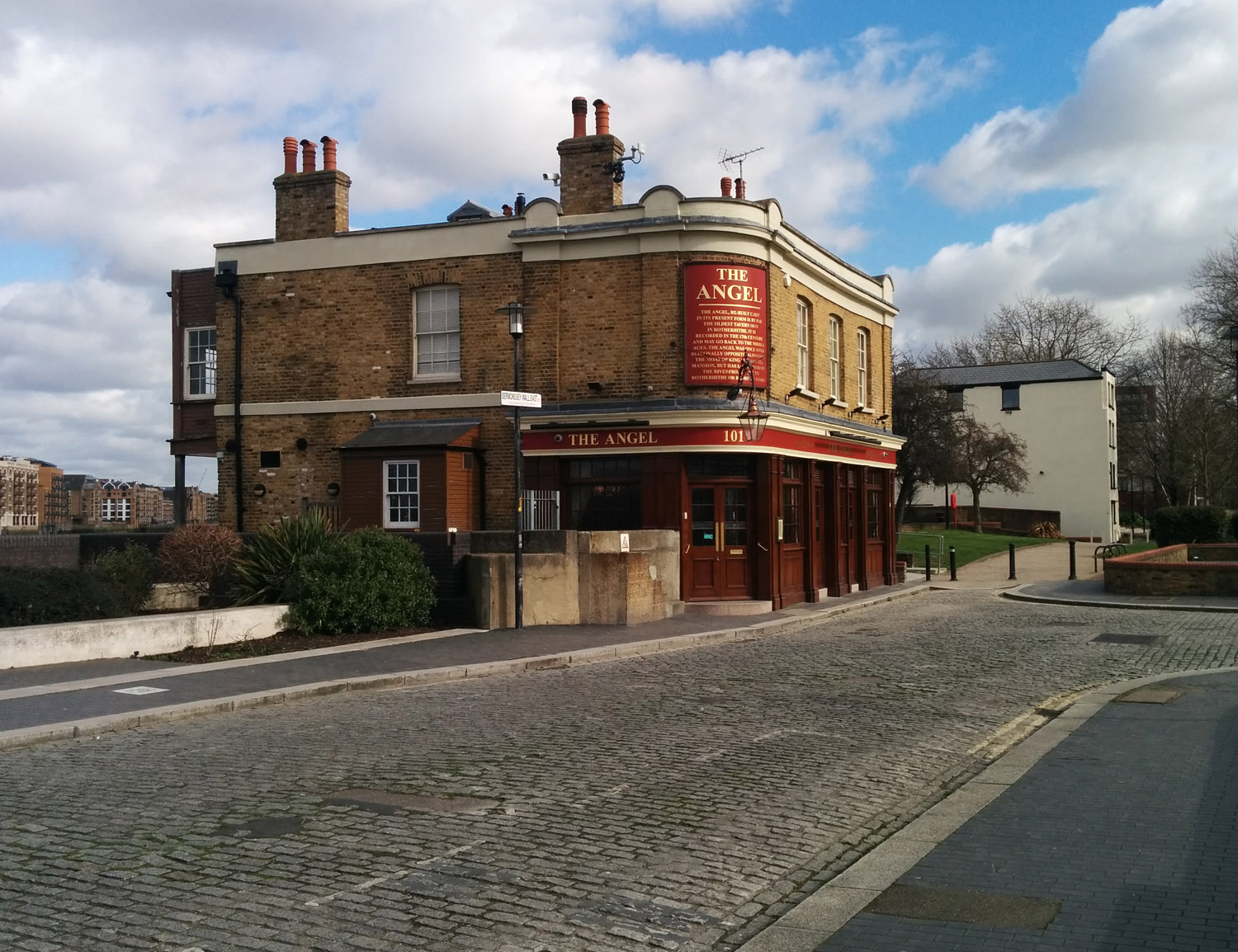 Here’s how it looked in the 1930s  (photo courtesy of A Rotherhithe Blog, which also gives a lot more background to this area) – 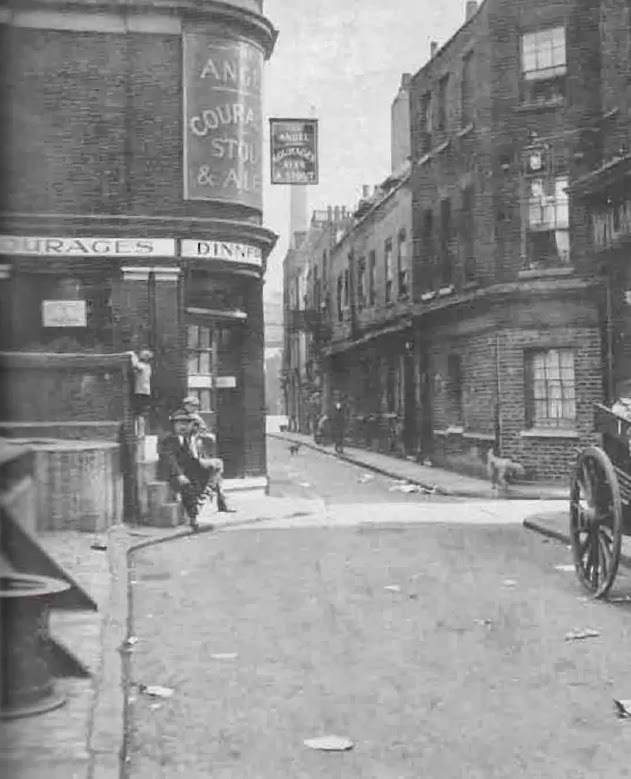 Further along the walkway, by the (modest) remains of Edward III’s manor house, are these poignant sculptures of Victorian social activist Dr Albert Salter and his family, who did a huge amount to improve the lives of local people when this area was a slum. The original sculpture was apparently stolen for scrap – this is a replacement. There’s more about Dr Salter here if you’re interested. 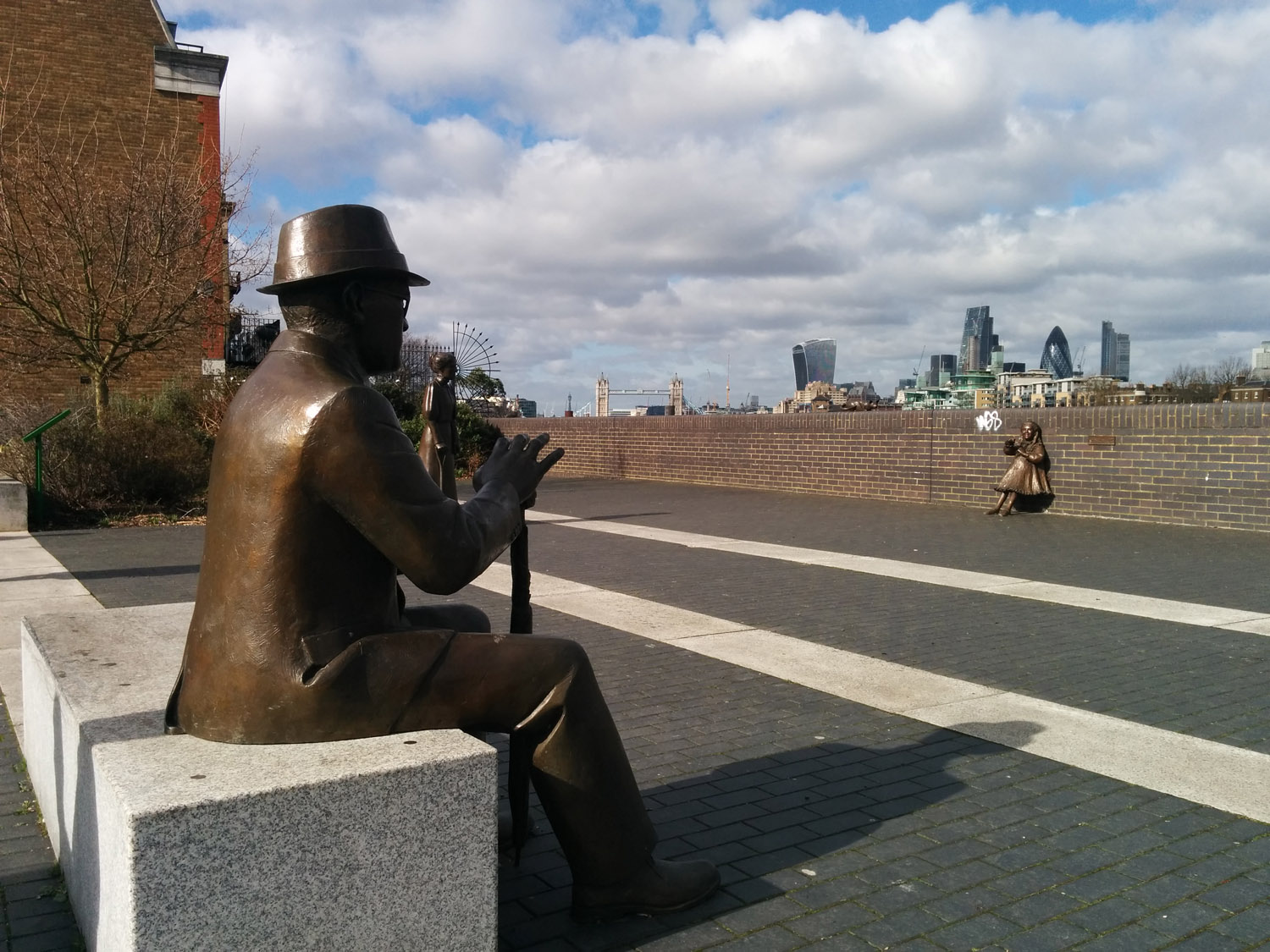 There were terrific views along the river to the City, and although this was a weekday it was so quiet. I love being reminded of how easy it is to get off the beaten track in London and peaceful spots where you might least expect. 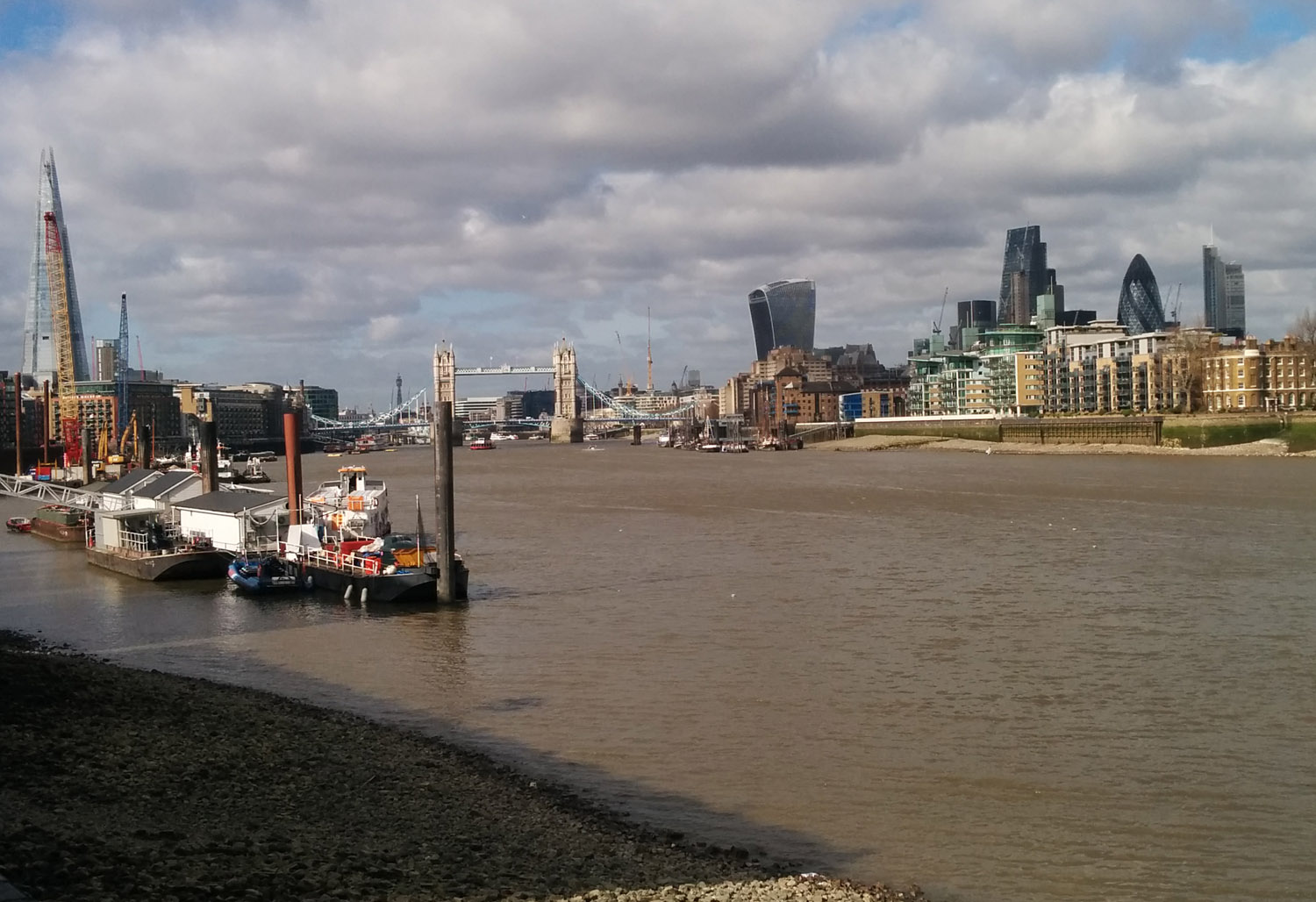 Much of our walk went through what used to be a busy industrial area where wharves, warehouses and factories have all been redeveloped as trendy offices, workshops and rather swanky residential flats. But the history is all around you still. 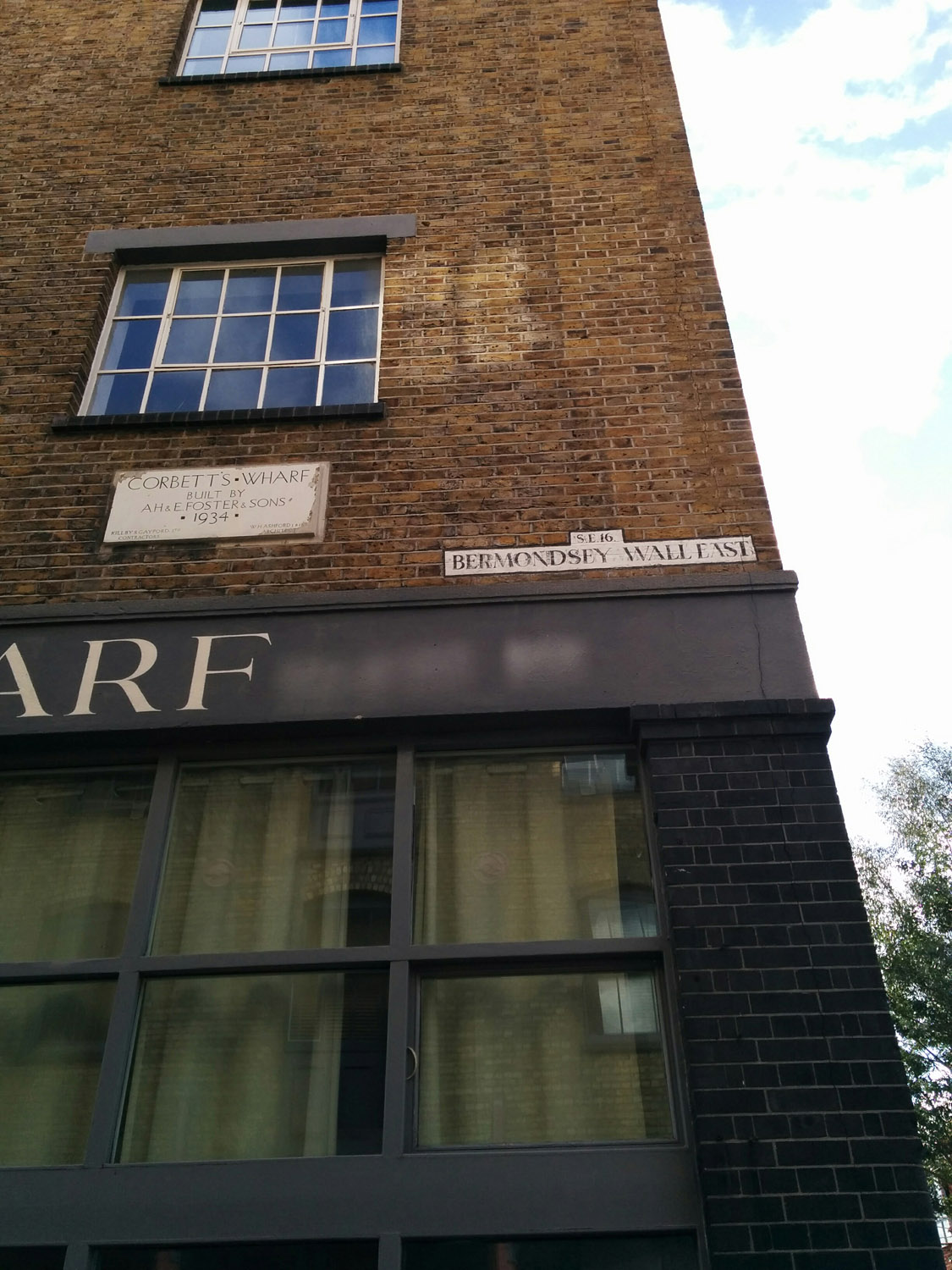 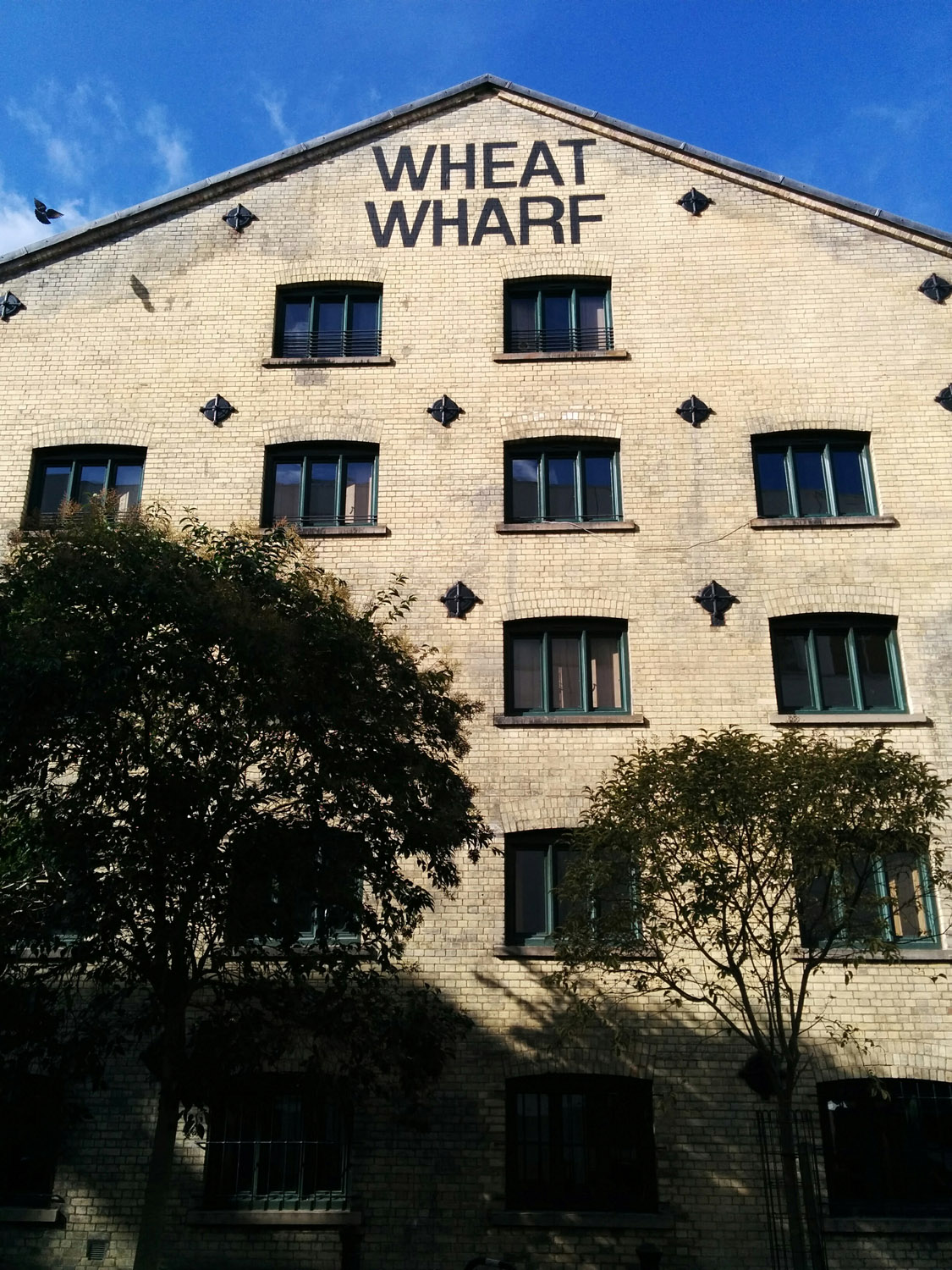 The mouth of the River Neckinger is a place which used to be notoriously insanitary, with the poorest people living among the worst kind of sewage and stench you can imagine. Dickens set the death of Bill Sykes here in Oliver Twist. Apparently Victorians knew it as the ‘Venice of Drains’, with all the various streams, outflows and whatnot pouring into the Neckinger and from there into the Thames. These days there’s a rather nice looking houseboat/jetty and plenty of happy seabirds. 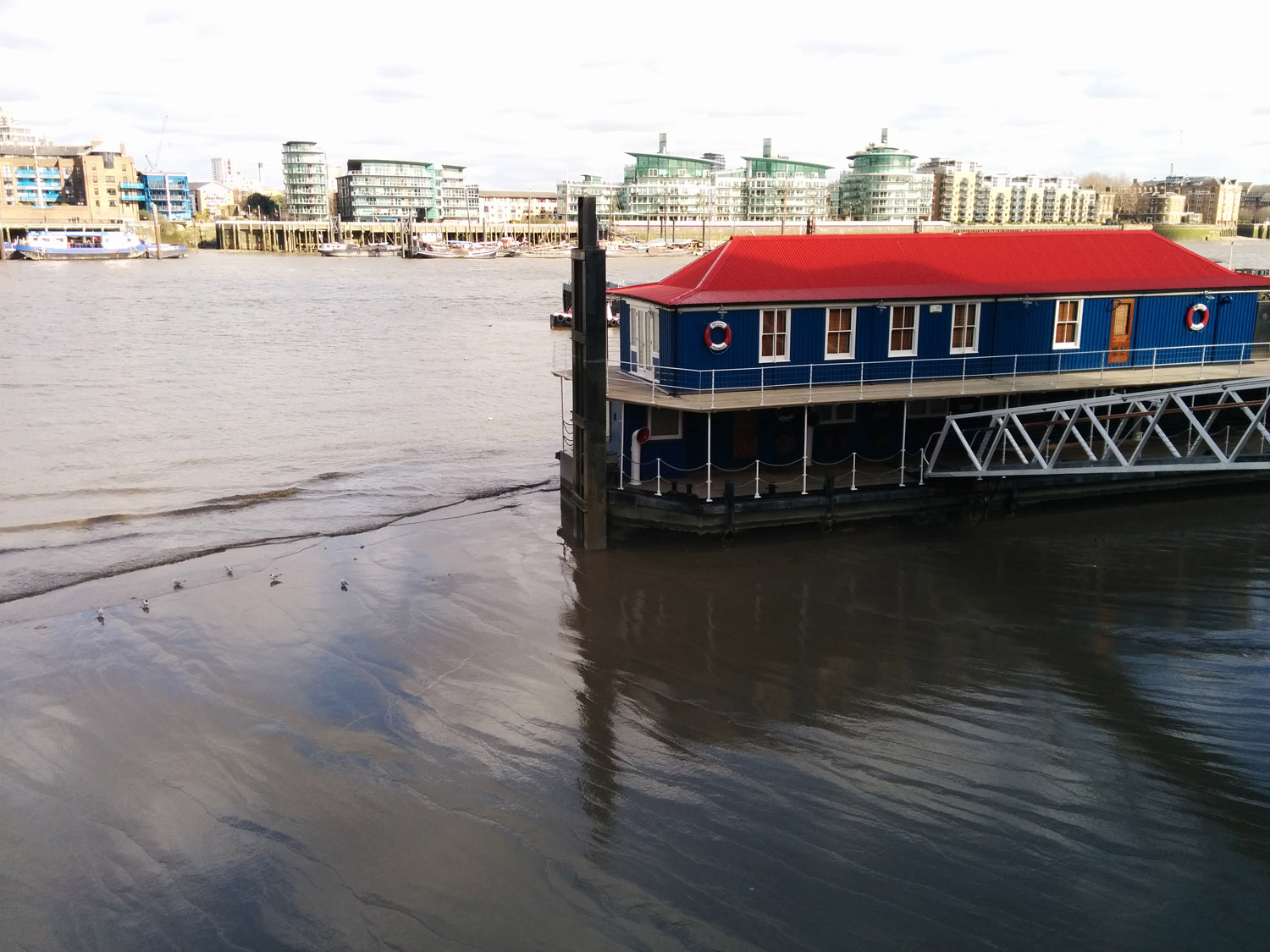 Low tide along the last remaining above-ground stretch of the river Neckinger. 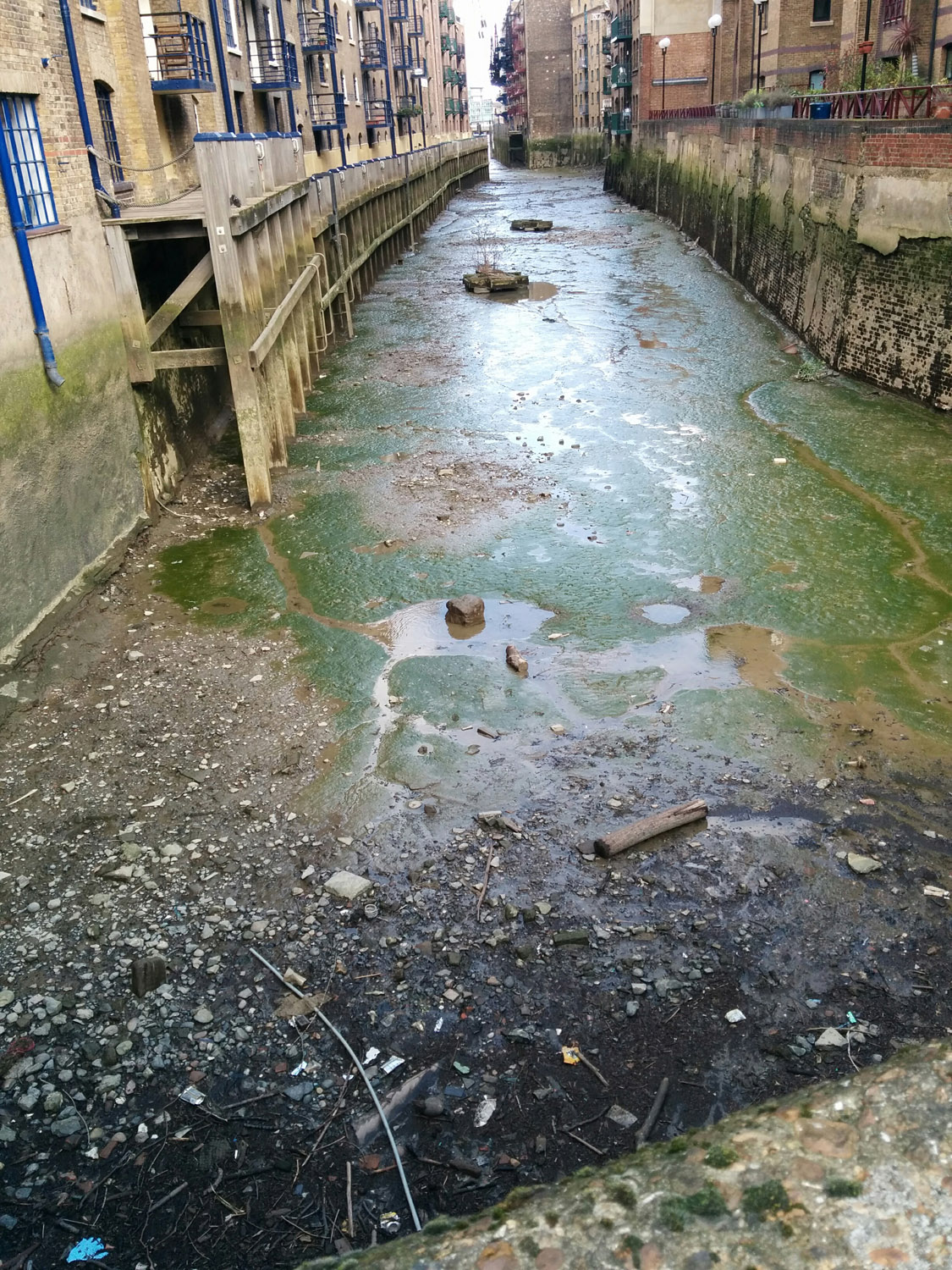 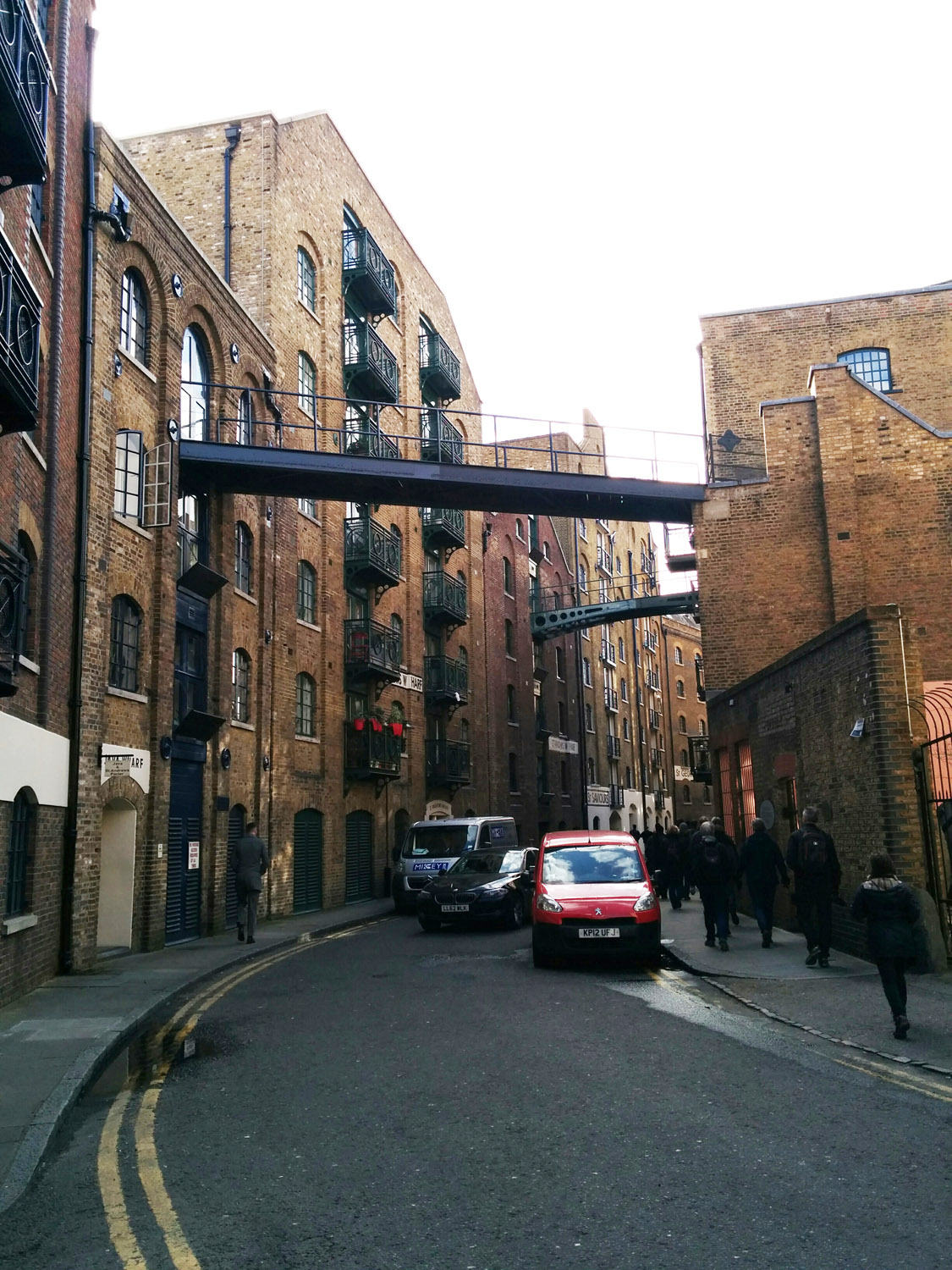 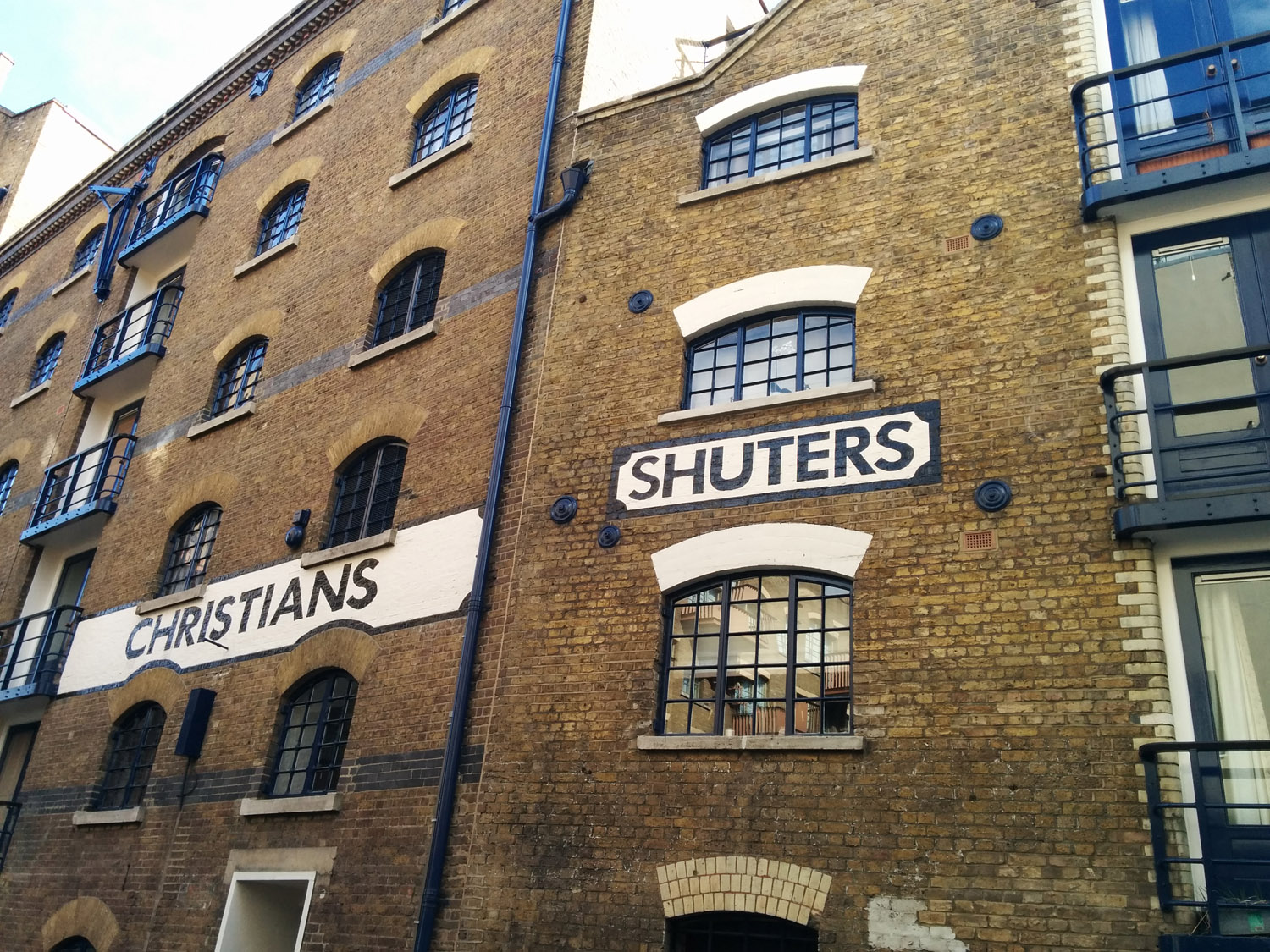 The middle section of the walk followed the route of the subterranean Neckinger, at least as much as is possible – along Druid Street with its railway arches filled now with artisan bakers & brewers rubbing along with car parts and scrap dealers, then on through the Neckinger Estate. This was built before the second world war, as evidenced by the air raid shelter signs still visible. 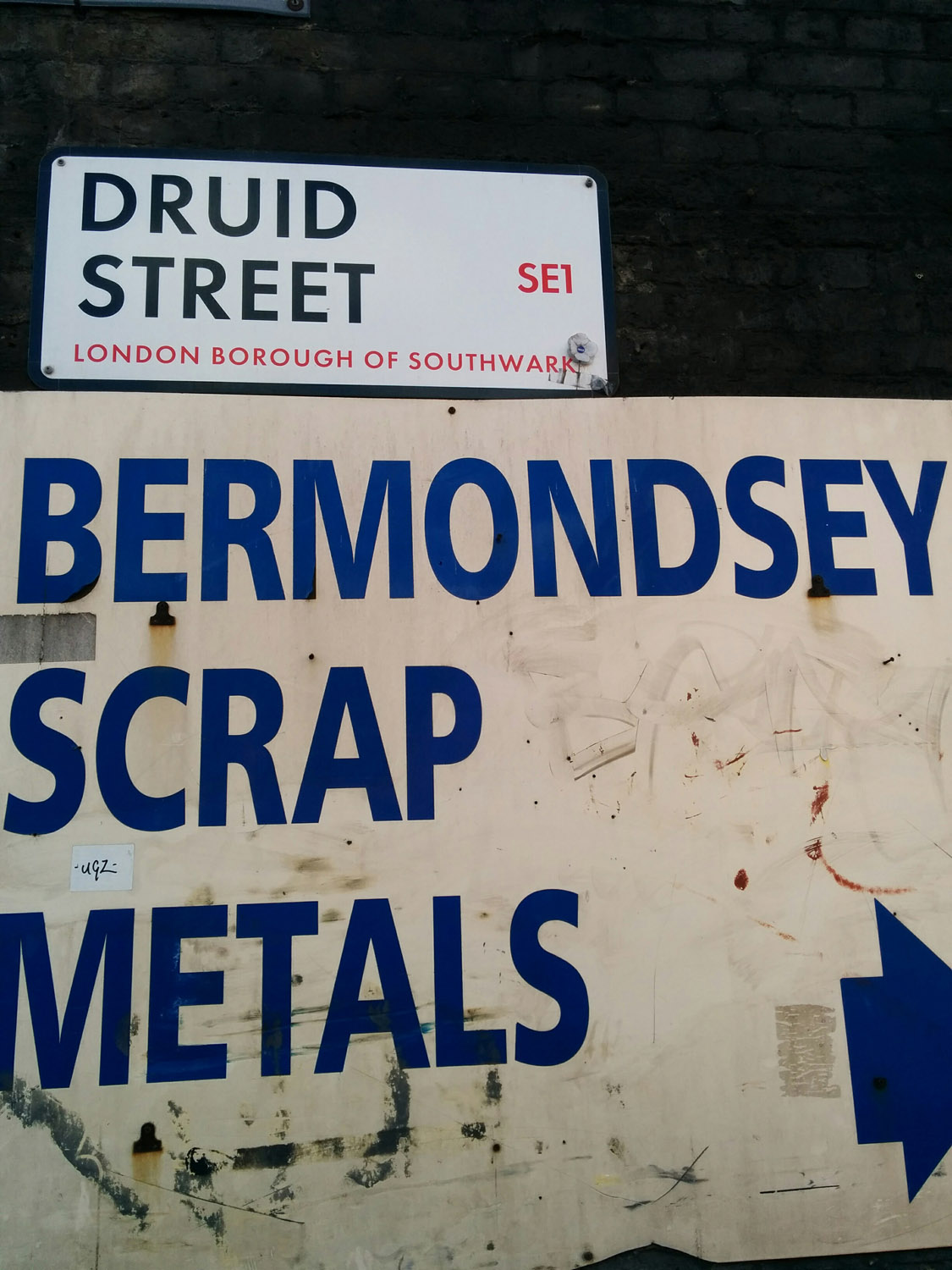 The walk took us through many decades of housing, all sitting side by side… 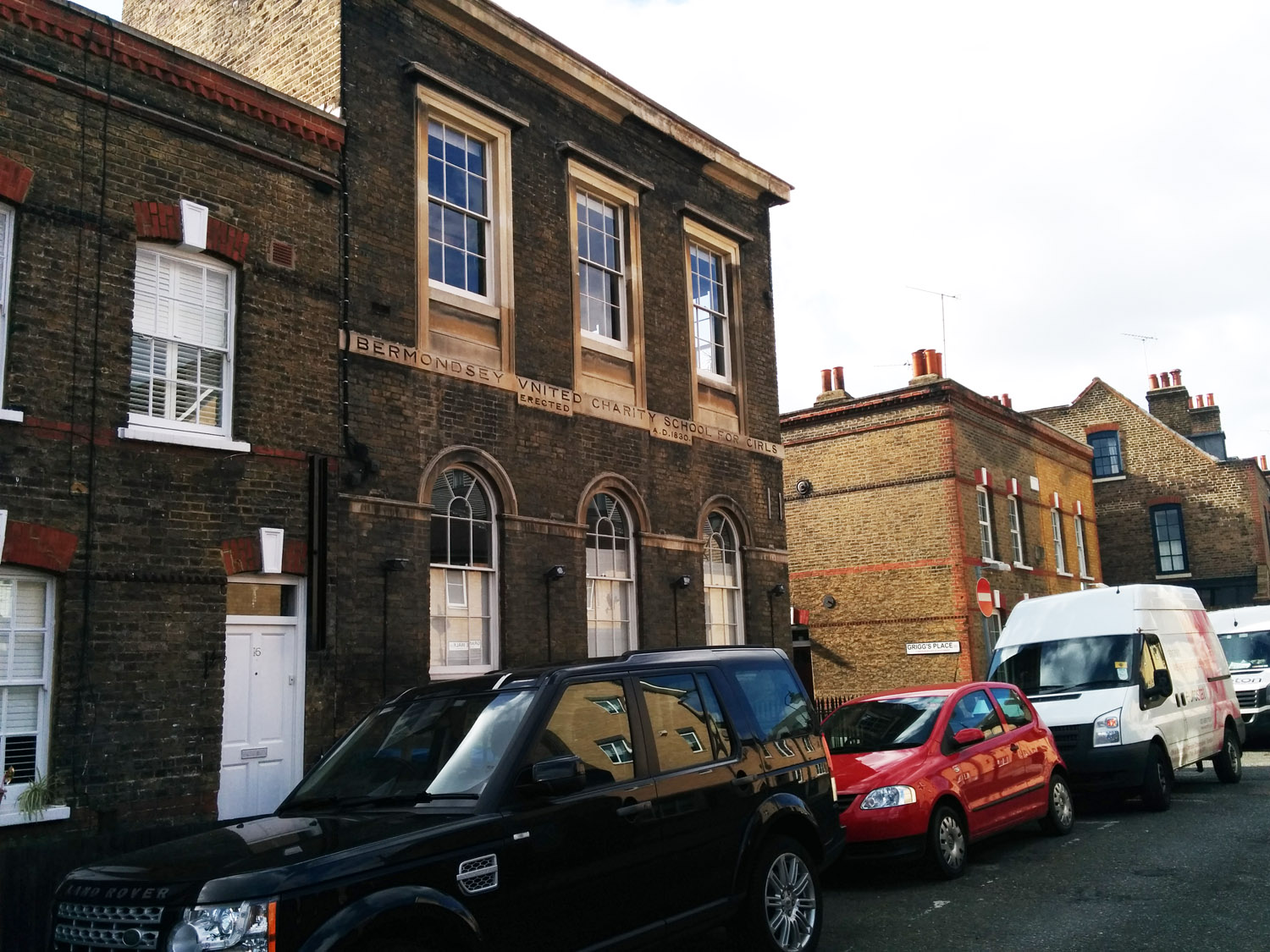 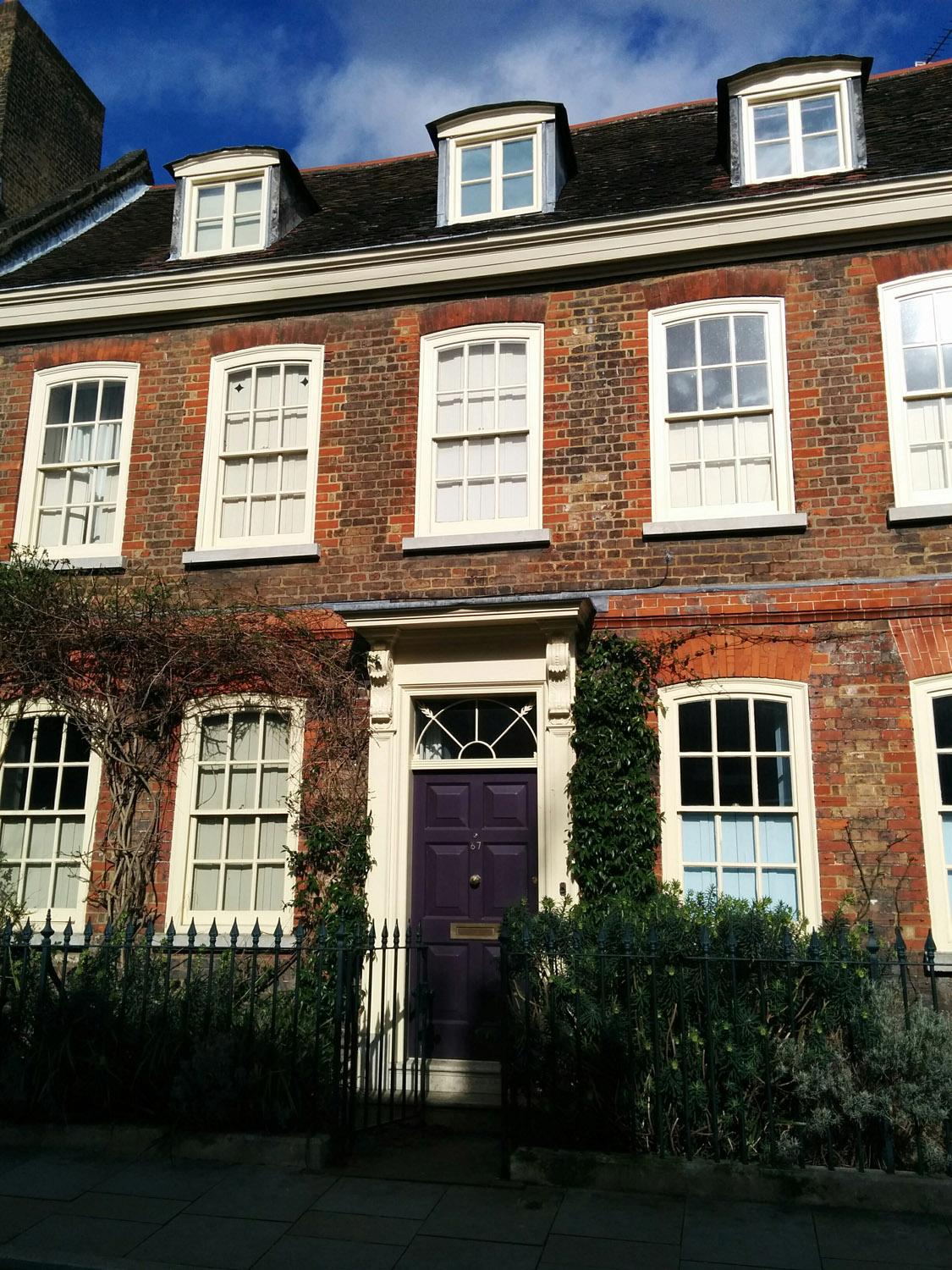 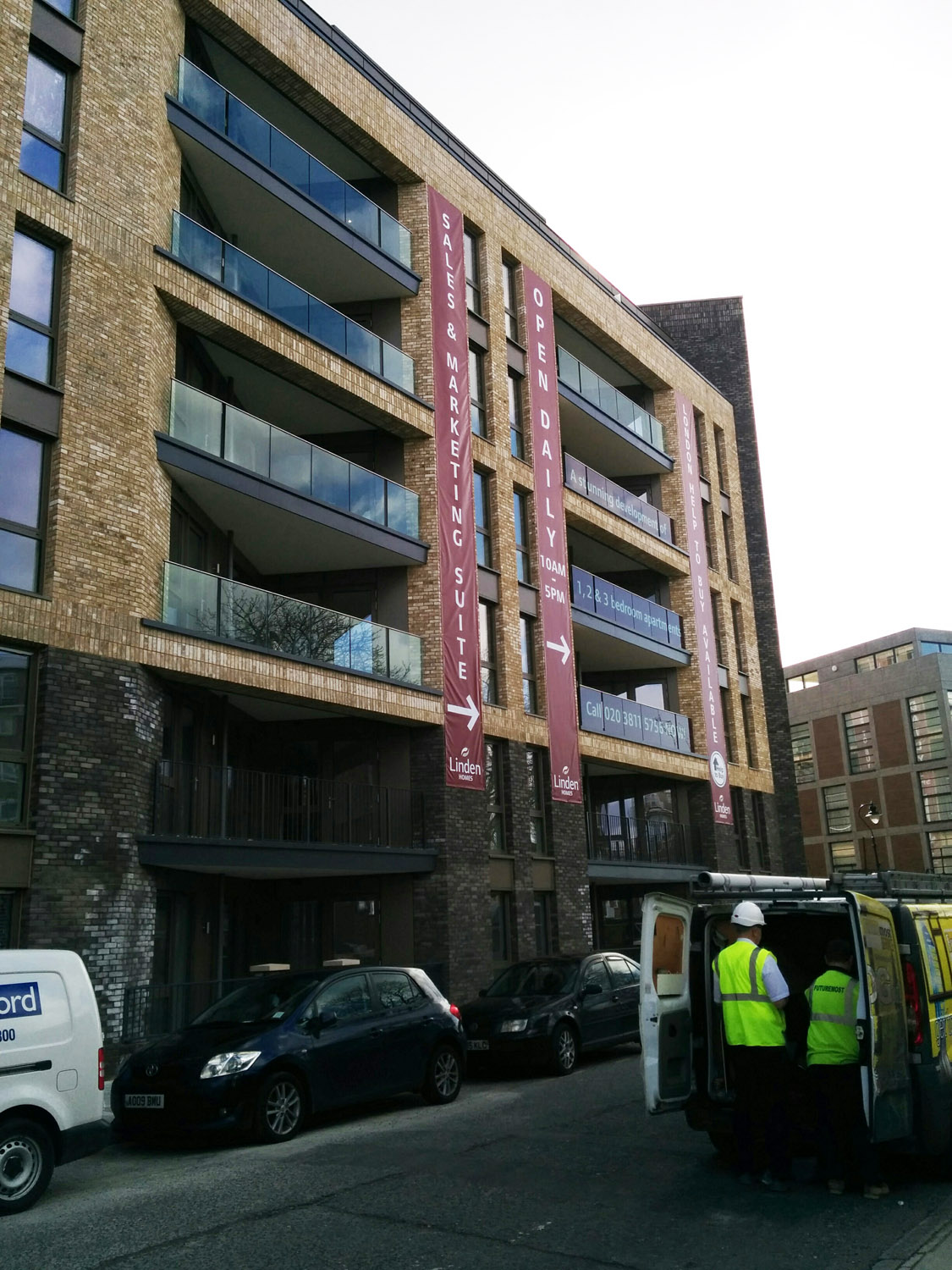 And the area is constantly being developed – 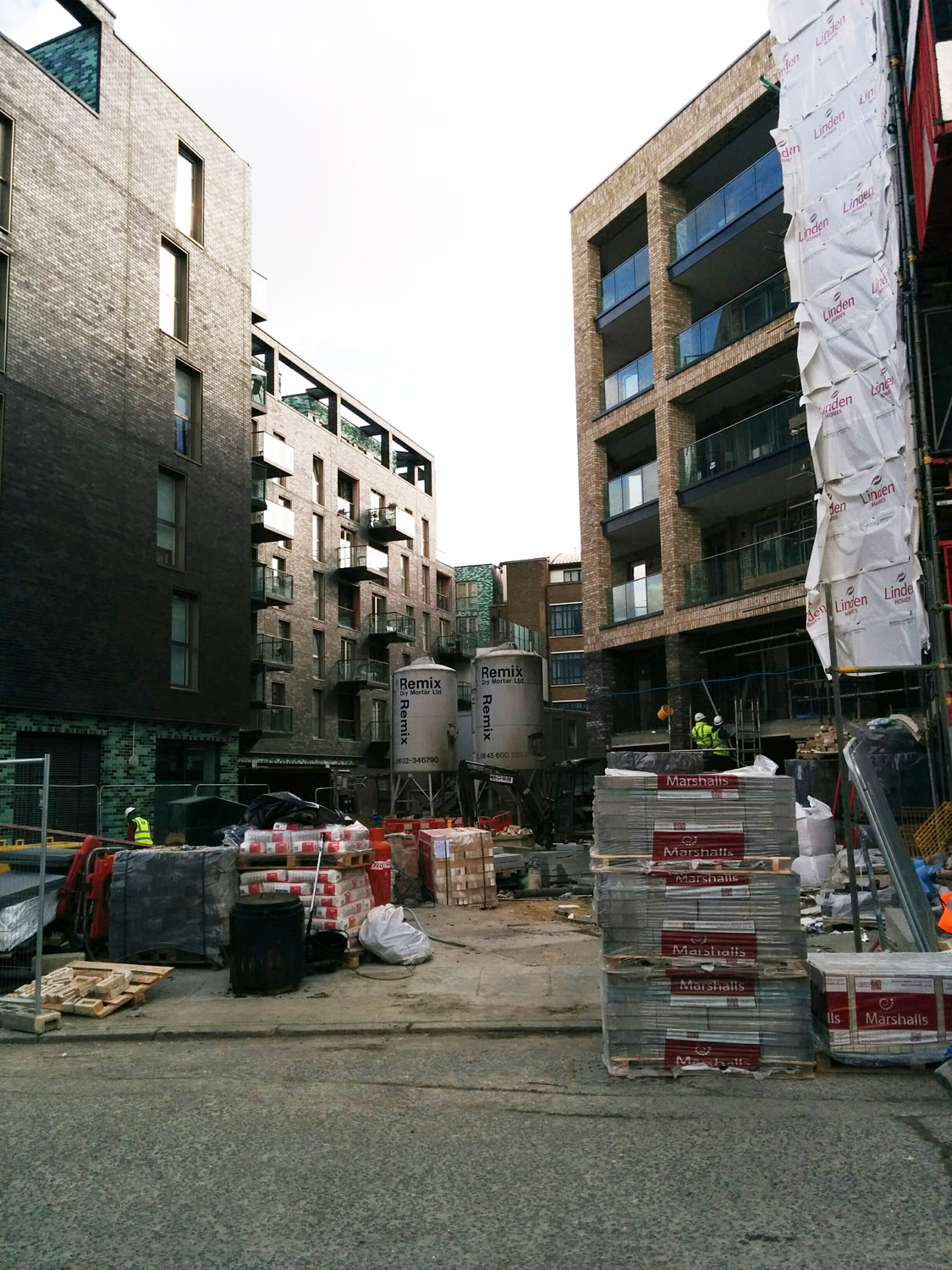 Not far from the site of Bermondsey Abbey (nothing left of it now) we came upon the former Hartley’s Jam factory, now an enormous housing complex with a two-storey upwards extension and various other bits added.

There were many food factories around here – I remember my mother talking about a relative working at the Peak Freans factory, where workers’ pockets were searched as they left at night and if a single crumb was found they faced instant dismissal! 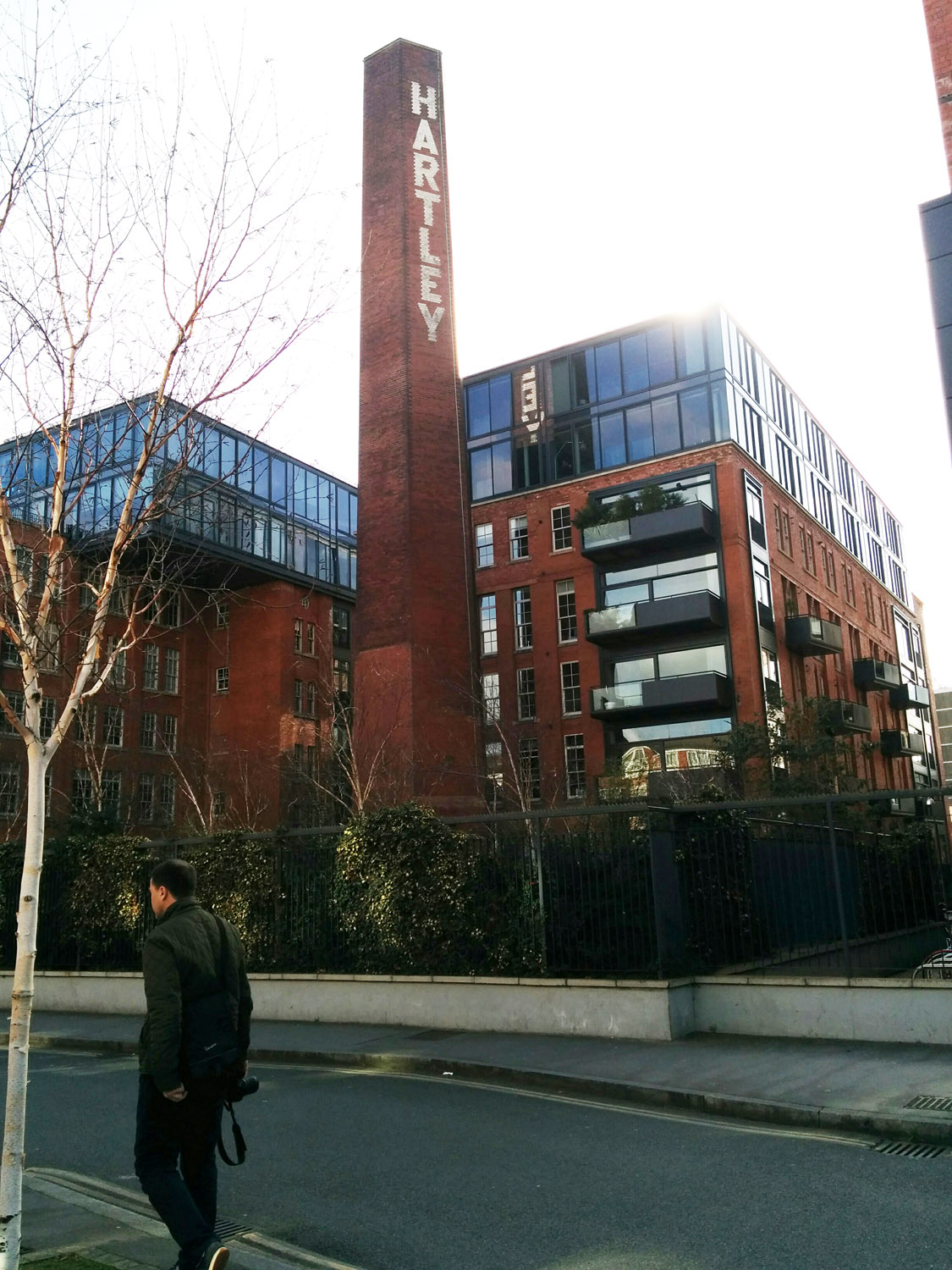 We stopped for a drink (and a sausage roll on the house) at one of Paul’s down-to-earth boozers, The George, not far from Elephant & Castle. Convivial and cheap! 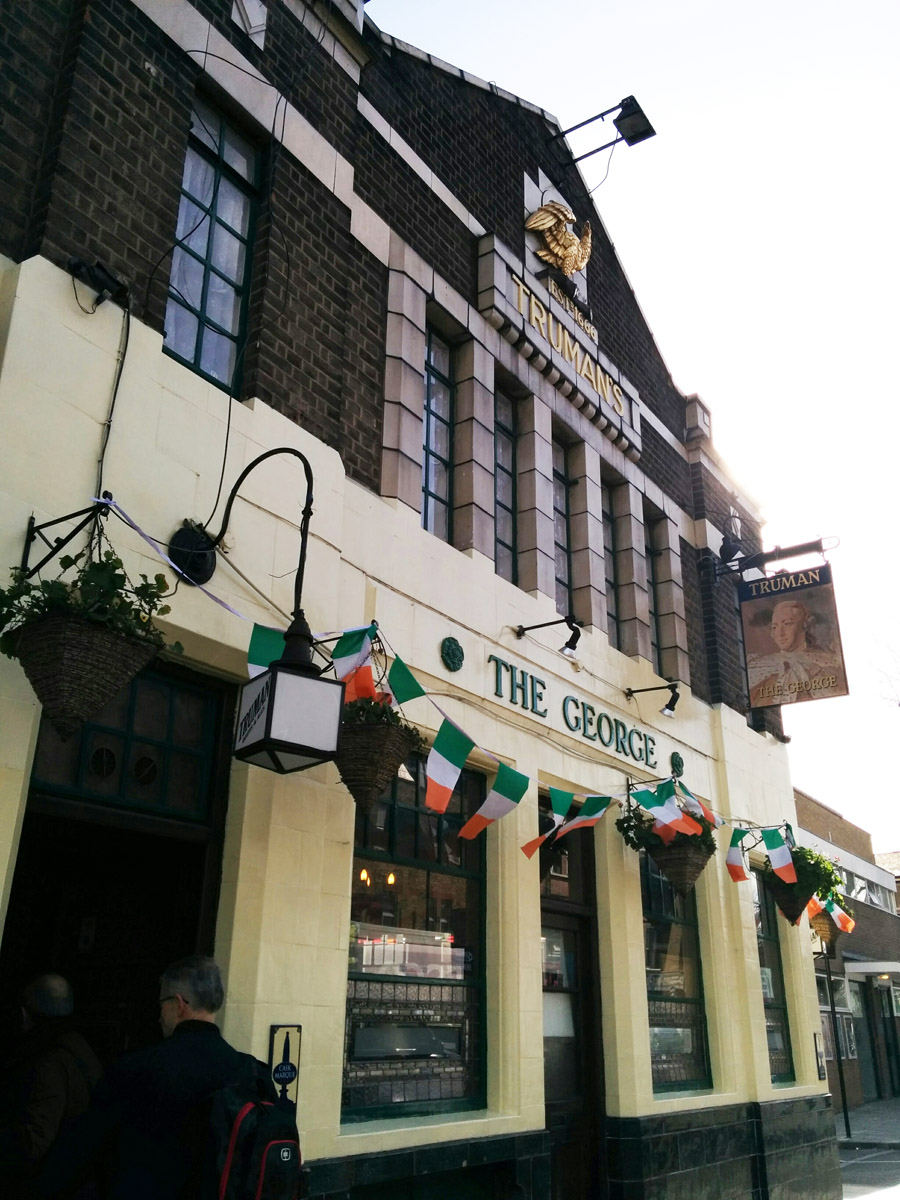 One of the more colourful sights nearby is this abandoned tank – there’s a story associated with it but I can’t remember – must been dozy after the pub! 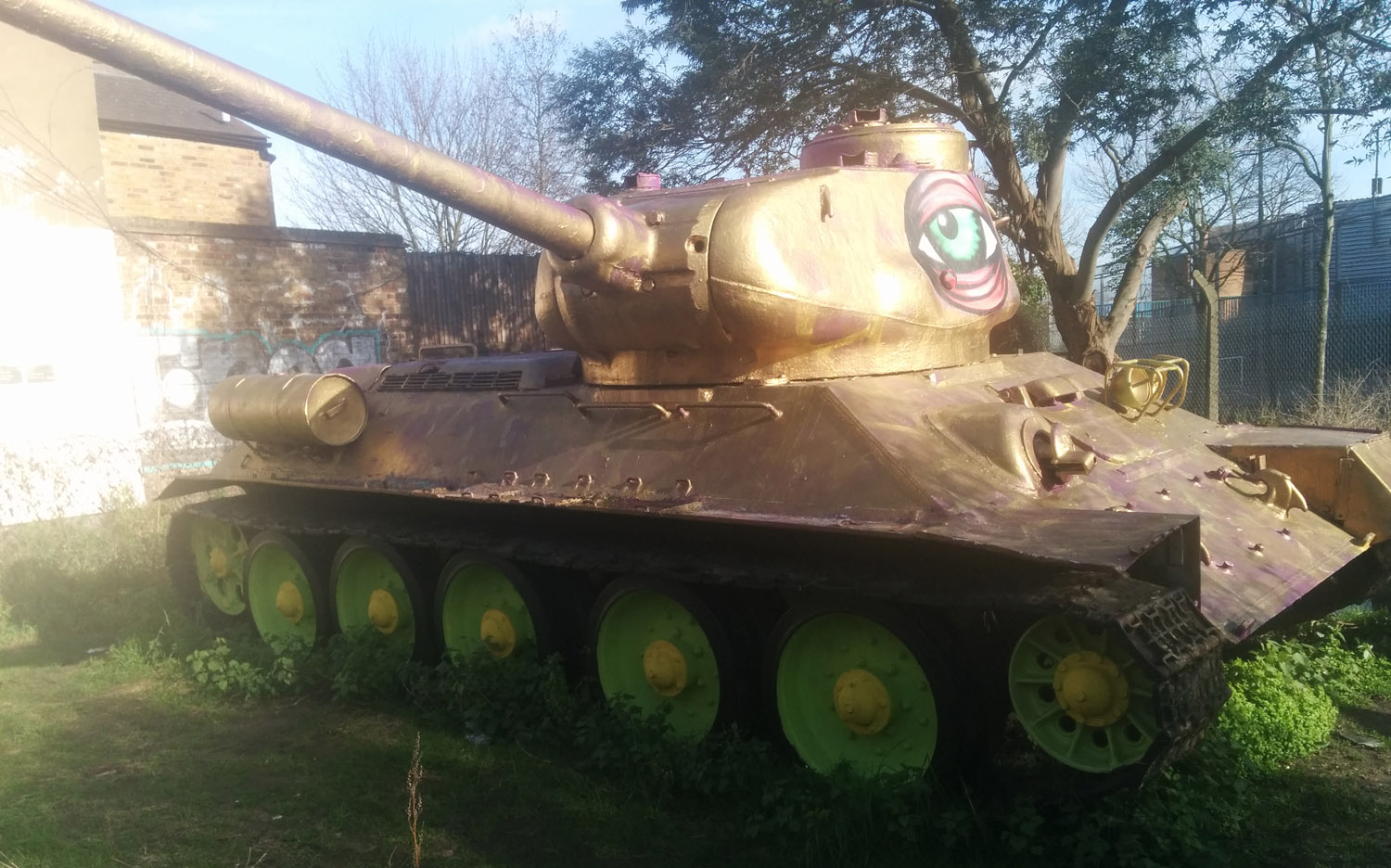 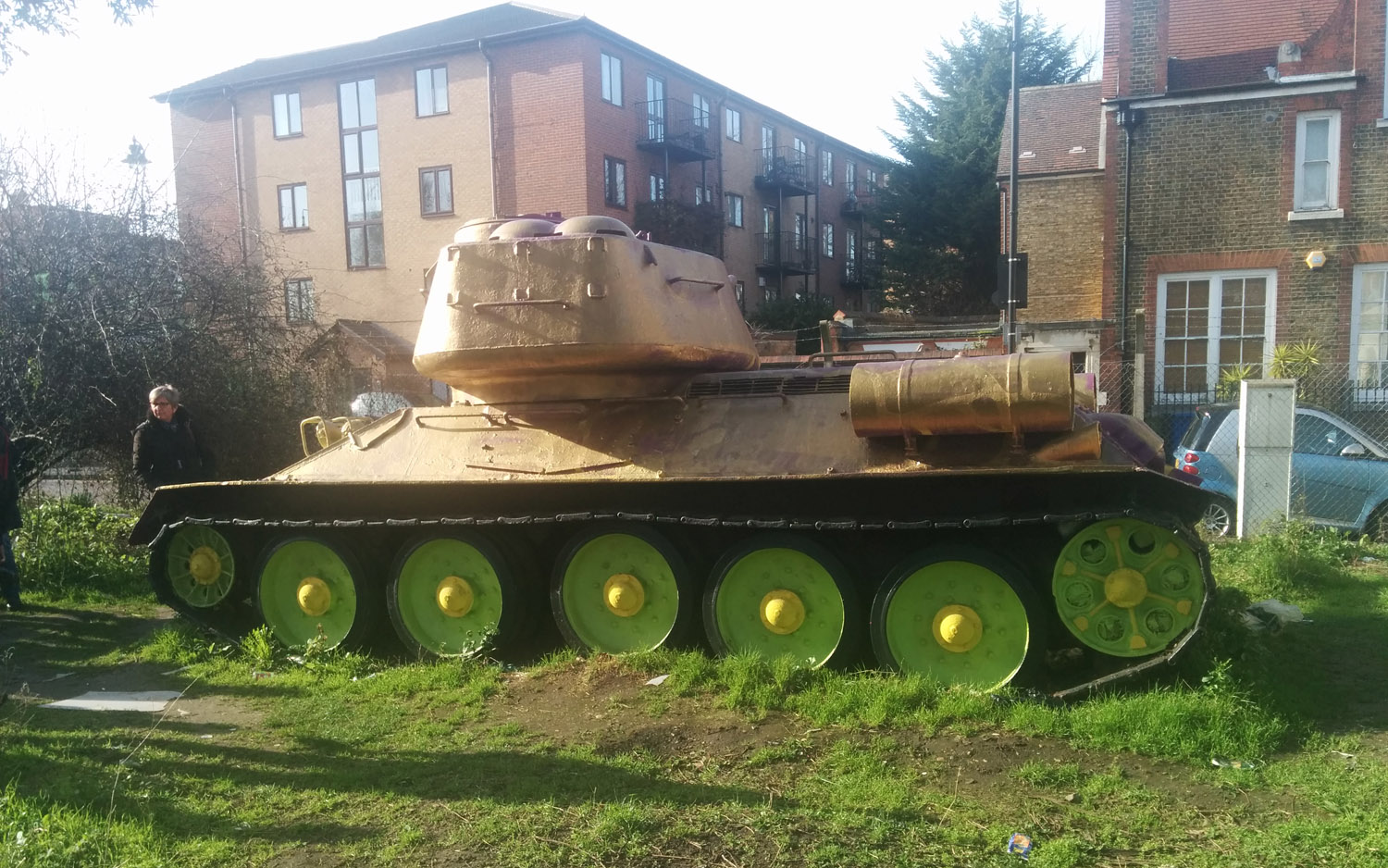 After crossing under the Old Kent Road we passed by a huge new development called ‘Elephant Park’, a replacement for the Heygate Estate which was run down by the council and then demolished – a controversial strategy in urban planning, but with much being promised.

Nick and I had to leave the walk early to catch our ‘designated’ train, but we’ll be back. 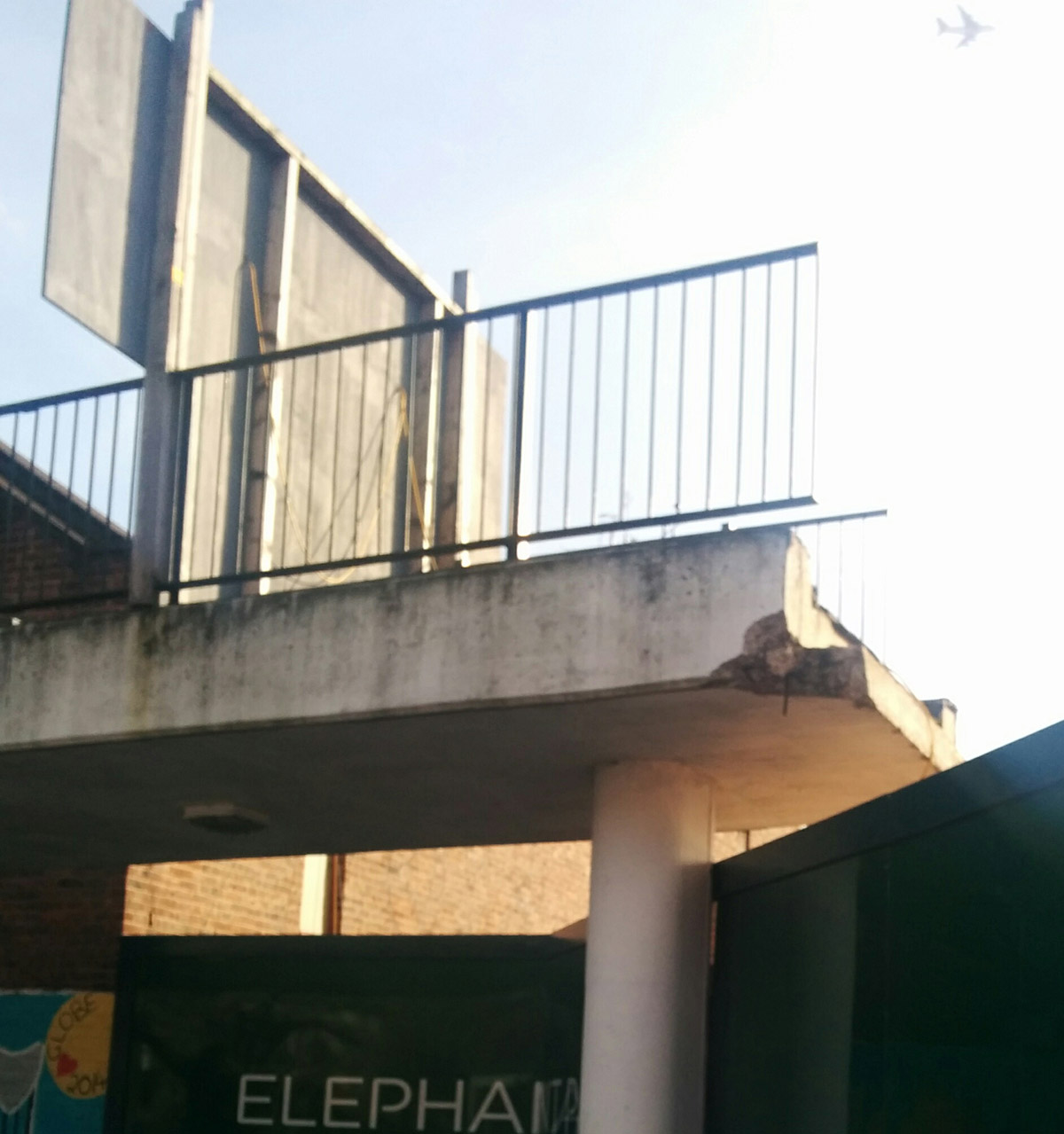 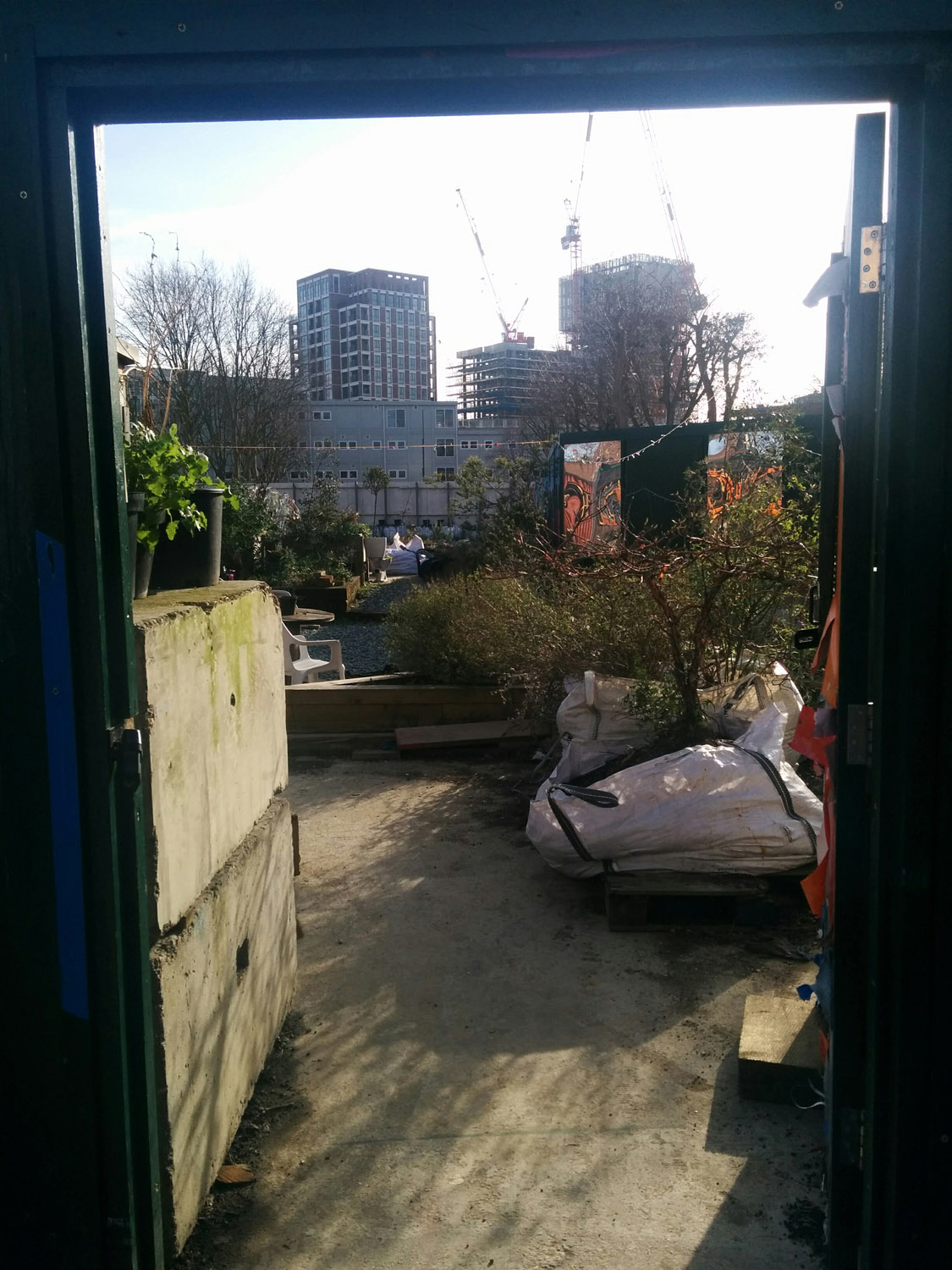 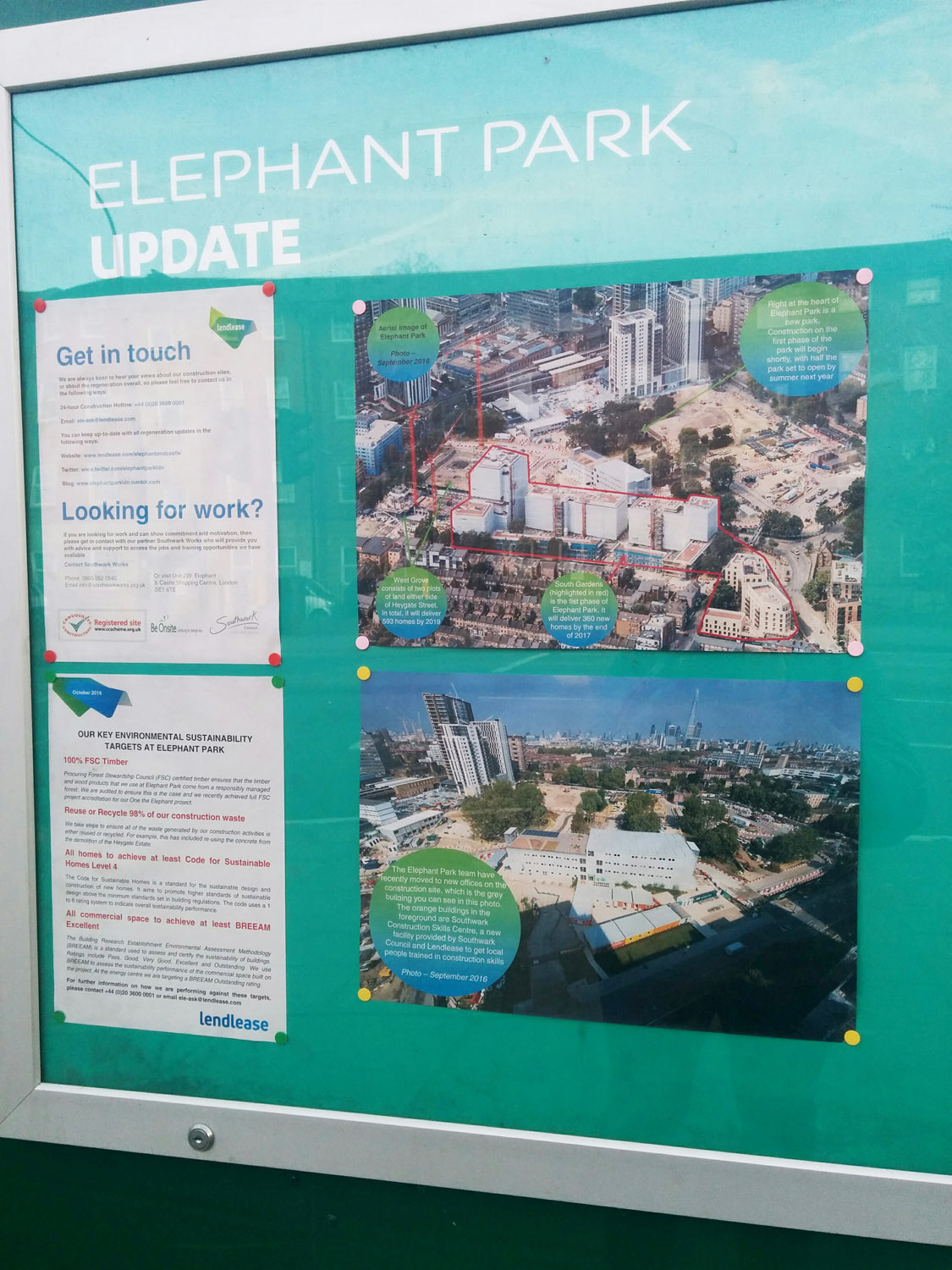 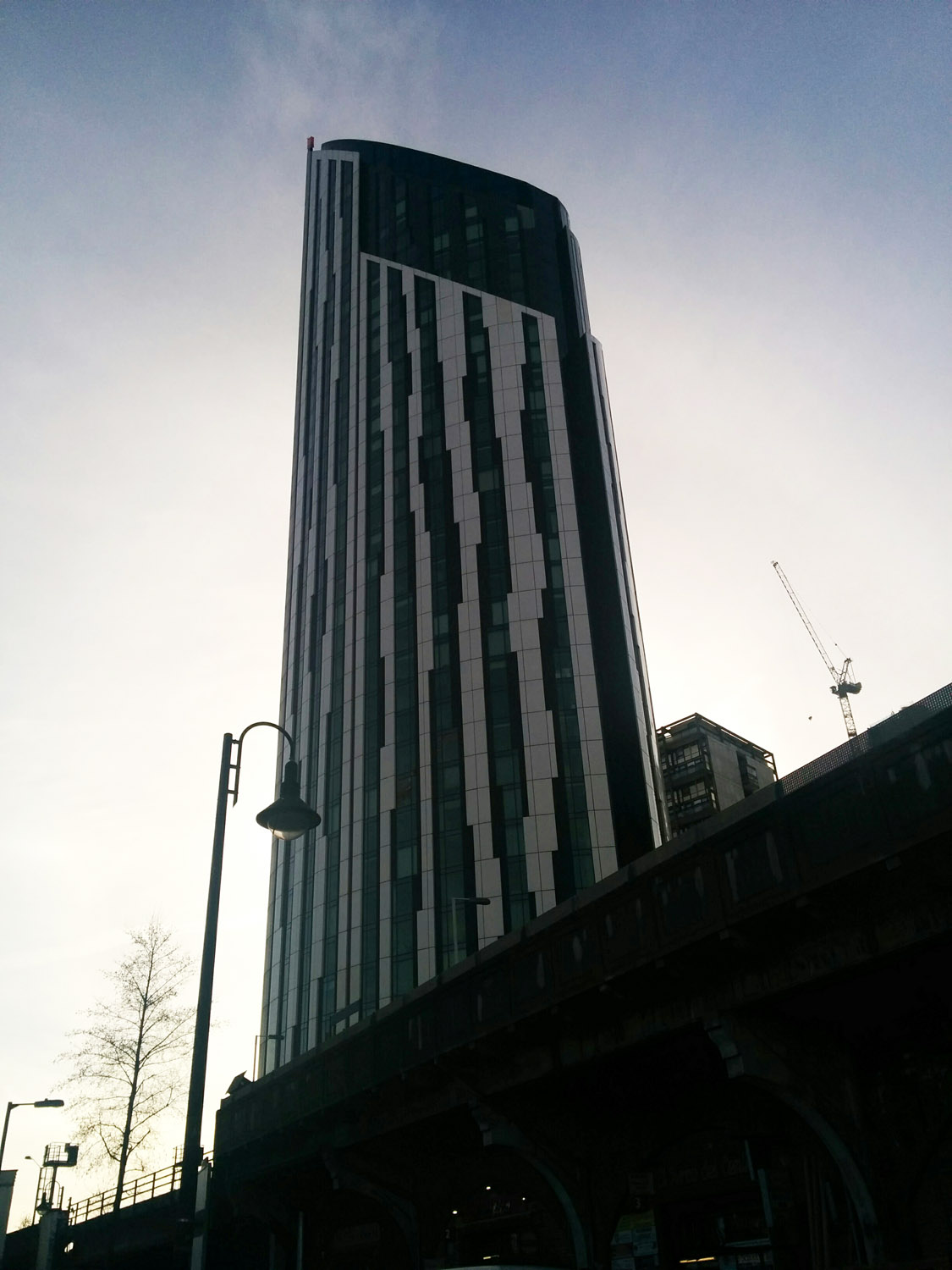 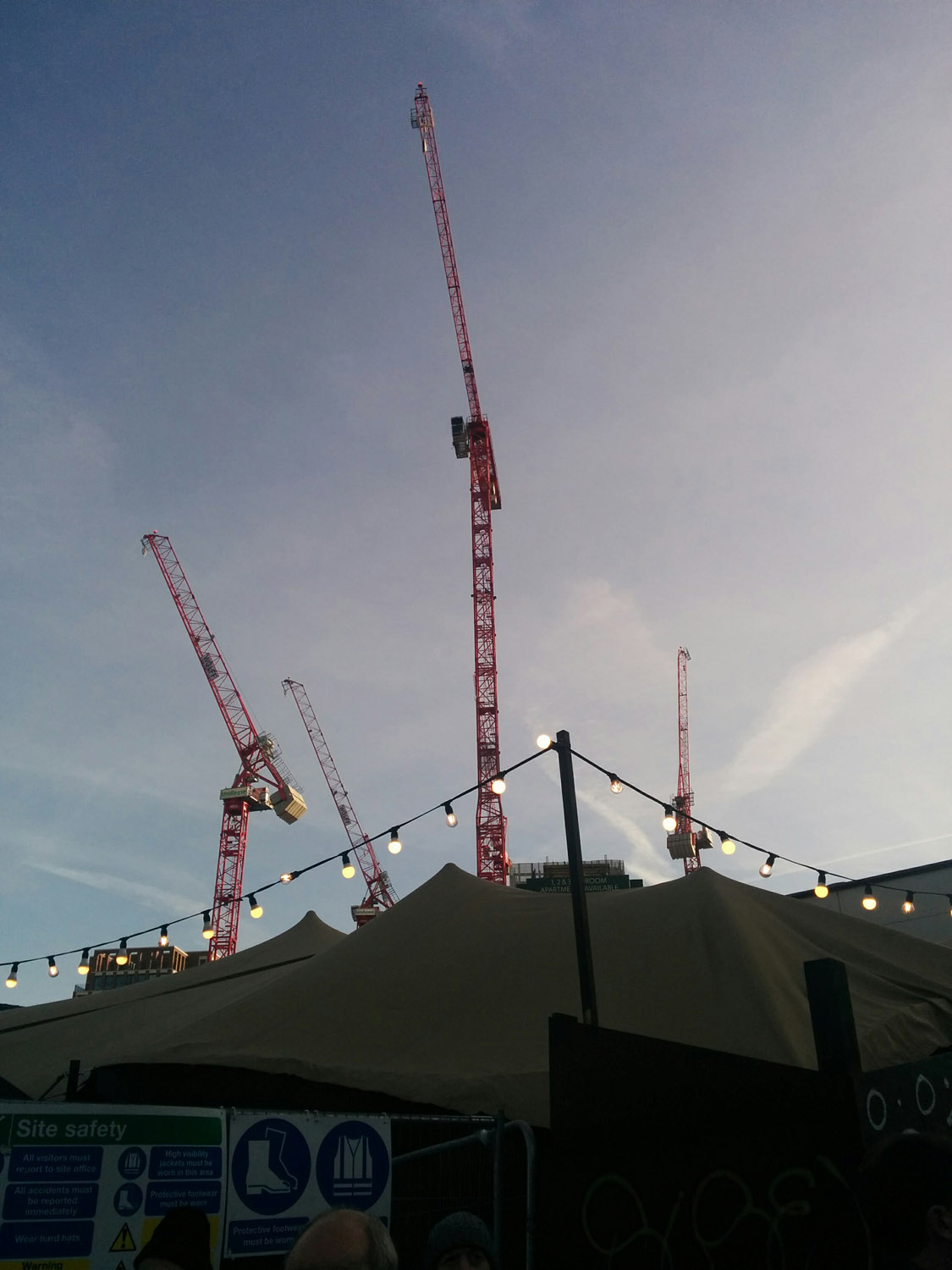