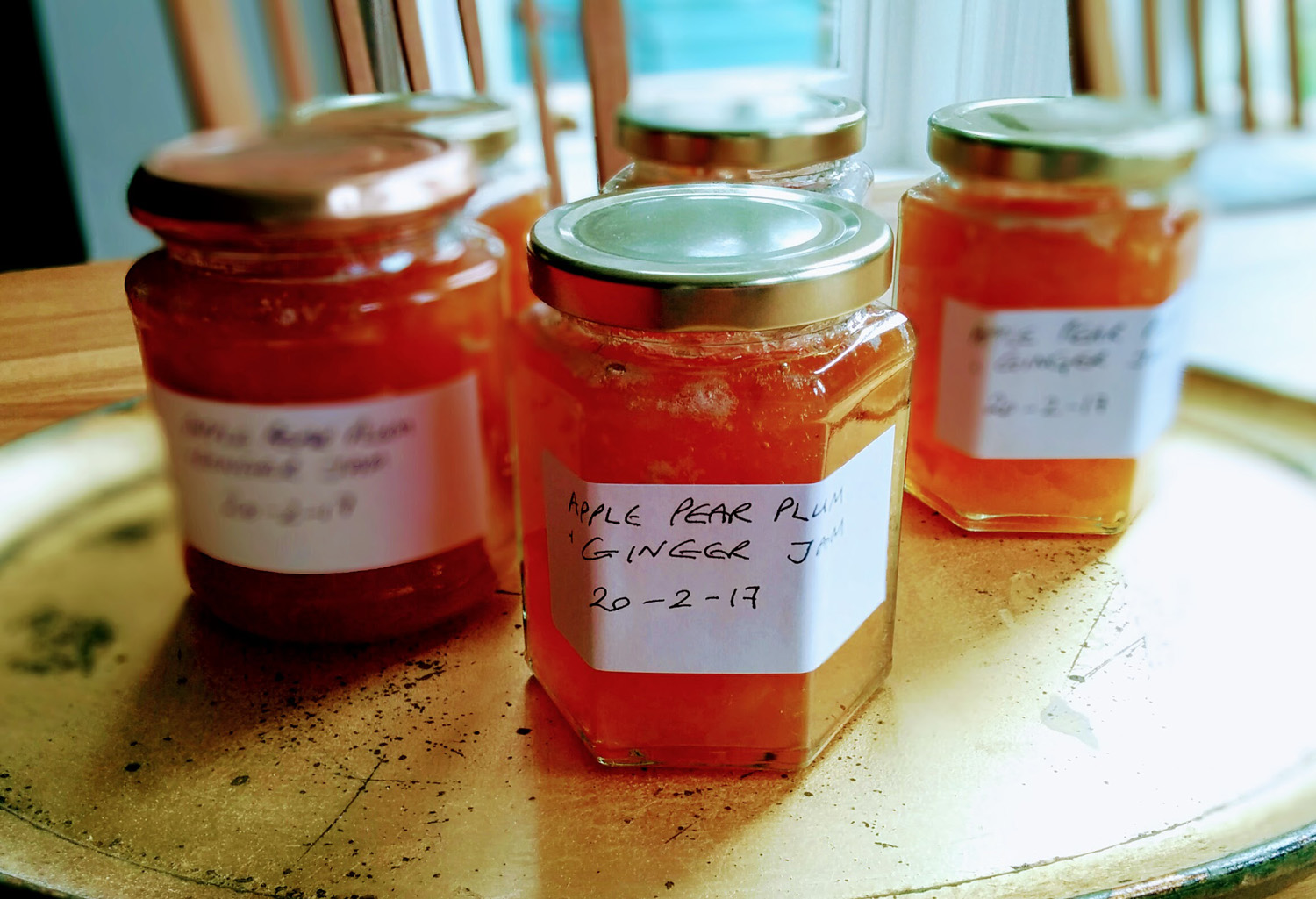 In just a few days our new kitchen project gets underway and I think maybe I’m getting some food-making tasks in while I can. The rhubarb and ginger jam I made in October is coming to an end so I thought I’d try a jam recipe from a cookbook I inherited from my mother, The WI Complete Book of Home Preserving.

Although it was published in the 80s the book has an old-fashioned charm, with whole sections on drying, potting (as in ‘potted beef’), salting and smoking. I don’t think I’ll be creating ‘Jellied Brawn’ any time soon, but there are some wonderful sounding jam, jelly and chutney recipes to explore.

And what should catch my eye but ‘Autumn Jam’ – in February? But never mind. The recipe calls for 1 kg each of pears, cooking apples and plums, 1oz of root ginger and 2.5kg of sugar. I was kind of intrigued by the thought of apple jam. The first hour and a half was spent peeling, coring/de-stoning. Peeling plums is a pain, involving cutting an X in the skin, blanching them in boiling water then plunging them into iced water to loosen the skins. It took me a while to get the hang of it but I just settled into it and listened to the radio while I worked. 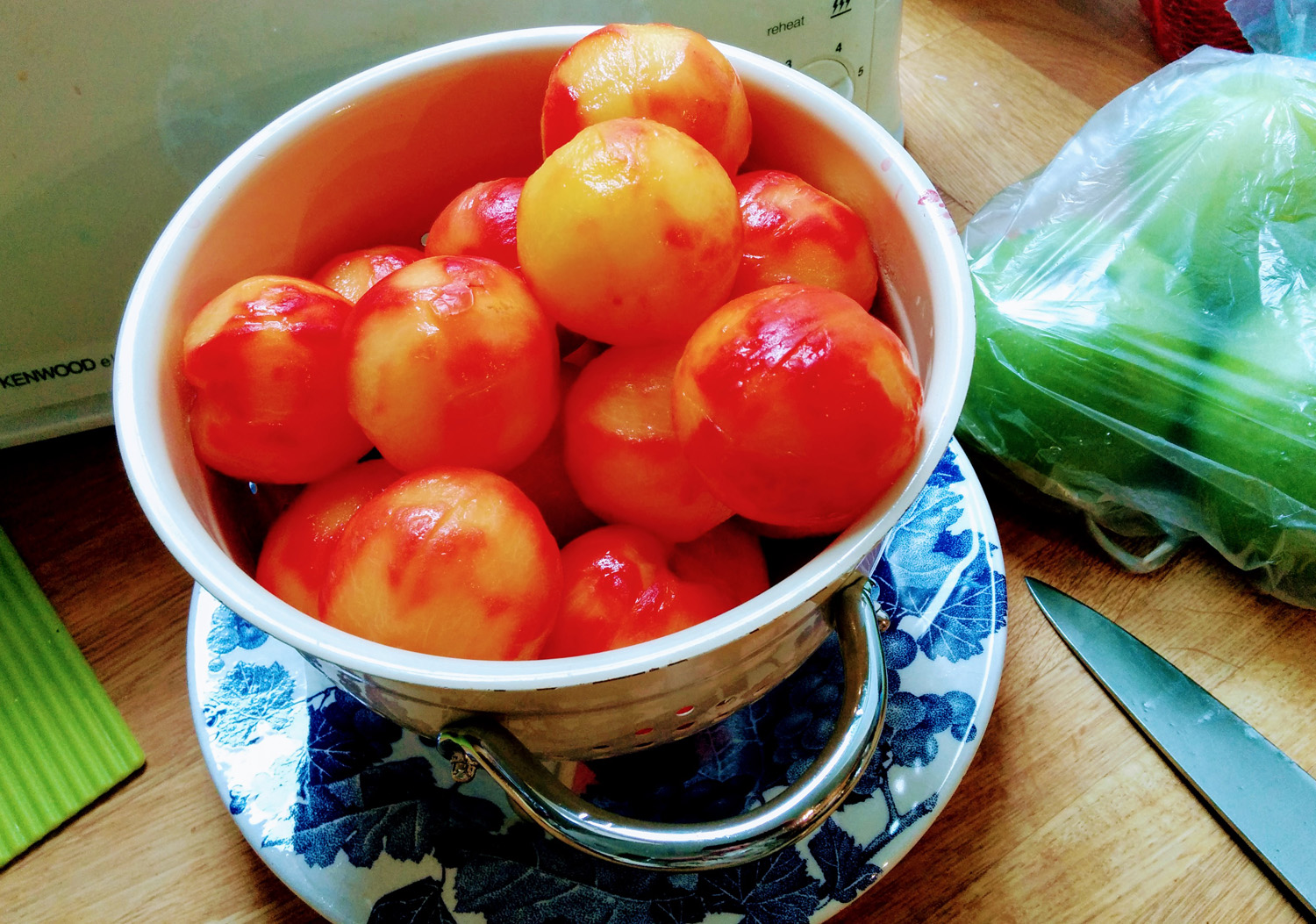 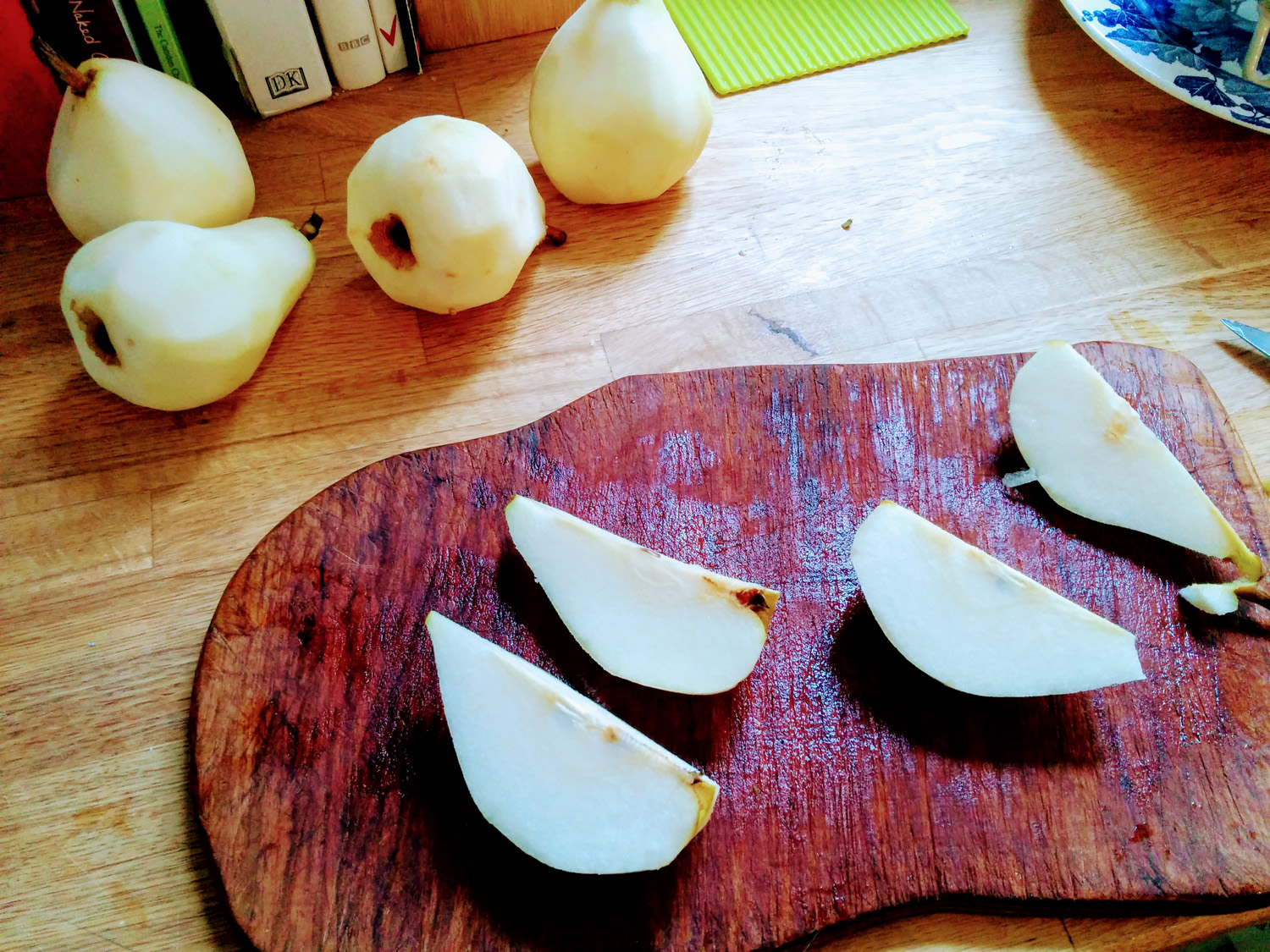 The recipe said to put the piece of ginger in a muslin bag and suspend it in the pan (to be taken out before boiling). But I love the taste of ginger and admit I just chopped it up and chucked it in! When all the fruit was in the pan the instruction was to simmer gently for a while until the fruit was soft but not breaking up. It didn’t say to cut the fruit up into small pieces to start with, but perhaps I should have done. I’m so used to cooking apples (Bramleys) disintegrating very quickly when you cook them, so I’m not sure why they didn’t.

I simmered that pan for ages and although some of the fruit softened and yes, even disintegrated, the majority stayed intact. What to do? I needed to move on to adding the sugar and then the boiling stage.

So I added the sugar, but maybe it was a bit premature. When it had all dissolved I got it up to the boil. This is when I got to use our lovely Blumenthal sugar thermometer which was bought for a bit of sweet-making a few years ago and not really used since. If I’m familiar with a jam recipe I’m happy to go with the ‘blob on a saucer’ test to check if the jam has reached its setting point. But this on got me a bit nervous. So in went the thermometer. The lovely WI ladies in the book said ‘boil until it reaches 110 degrees C’. They also said it may reach that in 5 minutes, or 15 minutes. But no jam needs to boil for more than 20 minutes.

Well, dear reader, the jam boiled up and was only just contained in the pan. I watched the temperature and it crept up to 104 degrees, and there it sat, fluctuating half a degree more then less. After 20 minutes it became clear the temperature wasn’t going up any further so I turned off the heat and bottled up the jam. 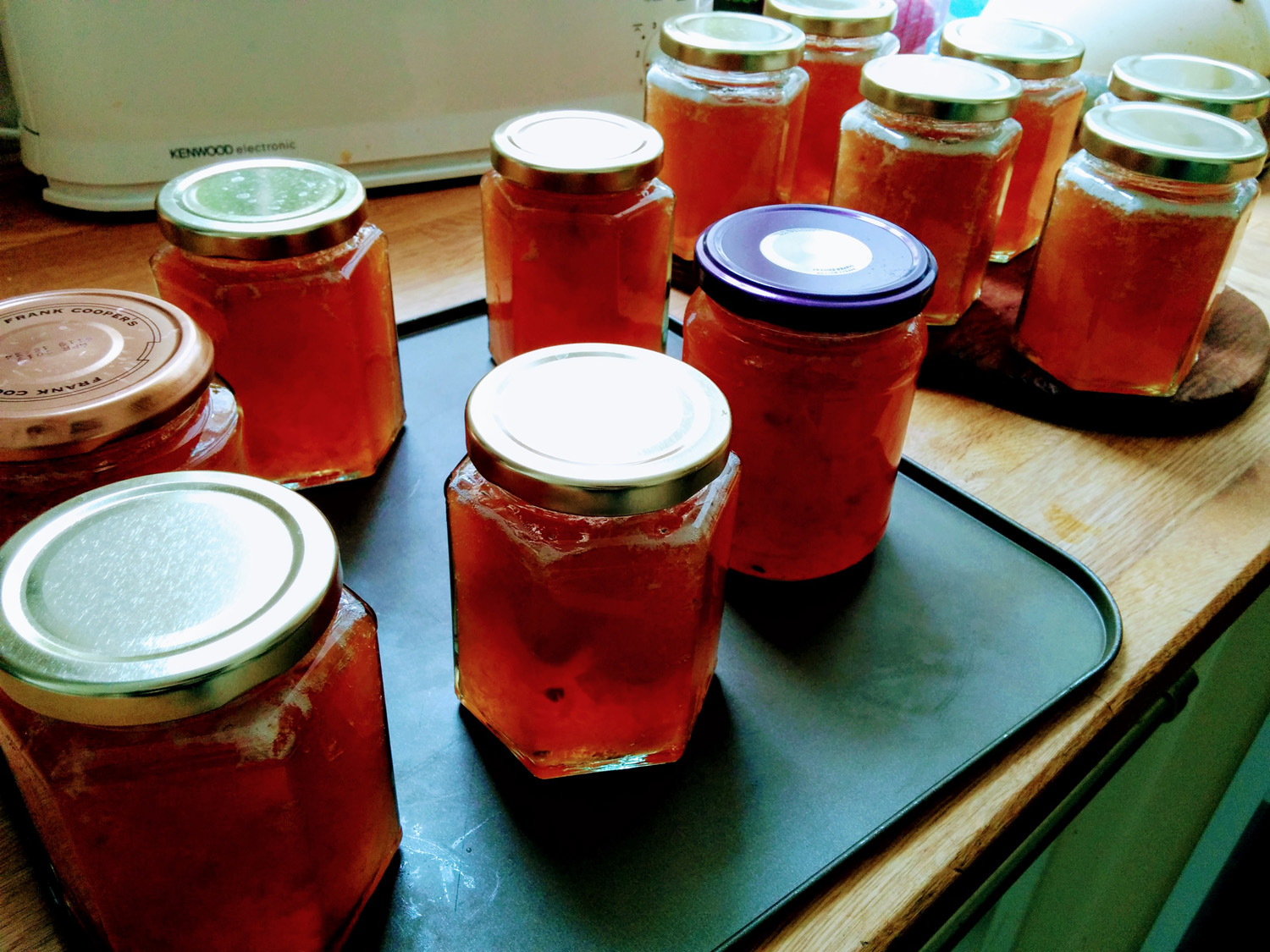 We are lacking a metal funnel and to be honest I really needed one – I made a right mess in filling the jam jars. But on the positive side, there was exactly enough jam for 12 jars, and although there were STILL a lot of large lumps of fruit, as it was gradually cooling it seemed to have a set consistency. So I’m hoping it will be edible!